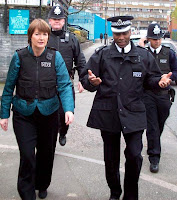 I'll bet Harriet didn't expect to see these gentlemen again quite so soon...

Is Harriet Harman one of the most repulsive people in the world? I mean, one can survey the various turds, shits, pigs, arseholes, backstabbers, shysters, spivs and charlatans in our Parliament and say, with simple honesty, that she is one of the very worst people in that den of thieves, whores and fuckwits. And given that, I think that one can say with confidence that Harriet Harman is, indeed, one of the most unpleasant human beings on the planet.

And so it is with undisguised glee that I report, seen at Guido's place, that darling Harriet has been a naughty girl.

Harriet Harman is being investigated by police after allegedly leaving the scene of an accident in which she drove into a parked car while talking on her mobile phone.

Ms Harman, Labour's deputy leader, is said to have stopped briefly after the crash, but witnesses say she drove off without leaving her insurance or registration details—an offence carrying a possible six-month jail term.

When a witness approached her car, the MP is said to have wound down her window and said simply: 'I'm Harriet Harman—you know where you can get hold of me.'

According to police sources, Ms Harman is being investigated for driving without due care and attention, driving while illegally using a mobile phone and failing to stop after an accident, the most serious of the three offences.

Like Baroness Scotland, Harriet Harman is also a lawyer by profession and has held senior legal positions in the government.

It was her government that introduced the ban on driving with a mobile phone.

It was her government that tightened up the law on careless driving—a measure that was, ironically, driven through by Baroness Scotland—who had a conviction for careless driving—whilst she was at the Home Office.

Under the 1988 Road Traffic Act, any driver involved in a collision with another vehicle is required by law to stop and give their name and address, as well as details of the vehicle's owner and the vehicle's registration.

Any driver who does not give their details at the time must then report the accident to the police.

A senior police source said: 'Ms Harman was due to be questioned by officers last week but because of the Labour Party conference, it is believed they have delayed speaking with her until later this week.

'The police were contacted by concerned members of the public who had witnessed the accident and the behaviour of Ms Harman who they said drove off without leaving her details.

'She is now being investigated for driving away from an accident because it appears that she did not comply with the law which requires her to leave her name and address or her insurance details with the owner of the damaged vehicle.

'If prosecuted and convicted for failing to stop after accident she could face up to six months' imprisonment - it is highly unlikely that a prison sentence would follow...

No shit, Sherlock. A prison sentence for someone as august as Harridan Harperson? Never. The prison sanction is only there to be used on the little people.

... but the fact that this kind of punishment is in place for this offence shows the seriousness with which the courts take it.'

The police source says that officers from Dulwich attended the scene and spoke to a number of witnesses.

A report was then passed to the London Traffic Unit's division in Sidcup, which is responsible for processing motoring offences in Ms Harman's area.

The police source added: 'After the police have interviewed Ms Harman, a case file will be sent to the Crown Prosecution Service and a decision made on whether to prosecute.

What do you want to bet that the decision will be not to prosecute and that this will never come near a court...?

'If prosecuted, she would be summonsed to appear in court.

'When questioned by the police Ms Harman will not necessarily be arrested but instead she will have to sign a police document in which she must state that she is telling the truth.

'In common terms it is the traffic equivalent of being questioned under caution for a criminal matter.'

Careless driving is punishable by a fine of up to £2,500 and between three and nine penalty points. Courts may consider disqualification in some cases. Drivers caught using a mobile phone receive an automatic three points and a fixed £60 fine.

Your humble Devil is pretty sure that it won't happen—I have no faith in the incorruptibility of the police, the courts or the CPS—but wouldn't it be wonderful to see this disgusting bitch being metaphorically fucked up the arse in court?

Mind you, she would probably whinge about how the judge was a misogynist and start trying to enact yet more inequality laws left, right and centre.

Mind you, this repulsive horse-faced cow does have some previous...

In 2003, Ms Harman was fined £400 and banned from driving for a week after being convicted of driving at 99mph on a motorway.

In April 2007 she was also issued with a £60 fixed-penalty notice and three penalty points for driving at 50mph in a 40mph zone on the A14 in Suffolk.

And her excuse for this late payment...?

A Labour Party source said at the time: 'She made an innocent mistake. She forgot to pay on time because she was spending all her time on the deputy leadership contest touring the country.'

Ah, it's basically the old "I'm far too important to worry about such things. Paying fines on time is for the proles."

Of all the people on this rather super planet of ours, Harriet Harman is one of those that I most loathe. Seriously, if I could cast her as any character in any film, she would be Carter Burke in Aliens.

Will the police be demanding her DNA?

A mobile phone is technology so it's only a technical breach.

She claimed over £9,074 for communications expenses and £353 for travel. So we were paying for the phone call that distracted her whilst she used the petrol we paid for to crash her car. Great value that one..

Ah, Carter 'They might be vile, blind, insectoid bastards that incubate their young inside humans but at least they don't sell out their own kind' Burke. Good choice.

I nominate Cristabella being torn apart by razor wire in Silent Hill.

Ms Harman is typical of a lot of neo-socialist women. She actually wants to be a man, and having realised that genetically that's impossible, she wants to destroy what she can't have. In one respect she is to be pitied. In the other, more sensible, aspect she should be destroyed. Totally and without mercy.

jic, I don't believe a word of it. 'Harman the manhater' is just her shtick, her way of differentiating herself from the other losers.

Does anyone seriously believe any action will be taken against her?

There's a film I've seen recently, where an assassin (killer) does his thing using a captive bolt as used to 'stun' animals before they are slaughtered. It would be wonderful if someone used the same technique against all the socialists in this country; harman, mandelson, straw, hoon, blair, brown, blears, scotland, prescott, kinnock, and everyone who has been given a 'title' during the past 15 years. Yes, patton, and the rest of you traitors, you're included.
And Hattersley, and Blunkett, of course

And if we apply the 'you-didn't-actually-hurt-anyone-but-you-might-have' principle which has crept into the legal system on Labour's watch, she should be jailed.

The sweet ironies just keep coming from this government of all the incompetents.

One of the reasons why you have to stop and talk to people (or go straight to the cop shop if no-ones around) is so your state of inebriation can be assessed. As it stands at the moment, she could have been over the limit at the time of the crash, and we'll never know because no one spoke to her immediately after the incident.

jic, you're referring to the excellent 'No Country for Old Men'. But you're far to kind. Stun the bastards indeed. That might be OK for some minor town hall functionaries who were only obeying orders, but the architects of Britain's descent into totalitarian hell need something much more imaginative.

Which brings me to an idea I had some time ago. As the government clearly regards prison building as an unnecessary expense, why not out-source it? Ten years in a Turkish jail sounds about right.

I give you one example. I caught a policeman using a mobile whilst driving, stopped him and asked him to explain. He refused to show Id, and had no numbers.

So I complained. Even though he admitted to using the phone whilst in charge, the police excuse was, my word against his, no prosecution.

One law for the police and politicians, one for the rest of us.

Wont someone pleeeeeeeeeeeeese think of the children.....and shoot the bitch.

H.Harperson, was doing 122 mph, and driving without due care and attention.(a loon if truth be known)But it was reduced to 99 mph because a 100 mph + you'll lose your licence.