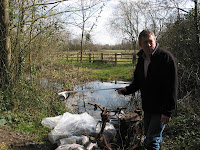 Dredging the crap out of an old stream, John Denham finds his next policy in a rotting tin can. Along with a cat turd or two.

As long-time Kitchen readers will know, your humble Devil does not have the warmest regard for students, regarding them as being as politically astute as a lump of banana-bread.

However, when the silly sods are attacked by someone as repulsive as Communities Secretary John Denham, your humble Devil finds himself wanting to spring to their defence. This situation would, of course, be intolerable were it actually the students being attacked but, luckily, it isn't really.

Ministers are to act against student enclaves by pushing through new laws making it harder for neighbourhoods in university towns to be colonised by large student populations.

Such enclaves often lead to resentment between students and local people, with whole boroughs left underpopulated in the summer months while renting students go on holiday. Some residents also argue that students upset the character of an area by ignoring the community in which they live.

John Denham, communities secretary and MP in the university town of Southampton, is a long-term campaigner against the impact on towns of large student bodies living in HMOs (Houses in Multiple Occupation, or those containing more than one household).

Denham is planning to tackle the issue through a change in the so-called Use Classes Order 1987 – which allow councils to control undue concentrations in specific types of property – by allowing for HMOs to be brought under greater council control. He is also likely to cap and control the distribution and the dispersal of HMOs by using the local planning system to set up "areas of restraint".

You see, what this disgusting little man is trying to do is to restrict what private individuals are able to do with their own private property.

Not that this should be a surprise: as we know from instances such as the smoking ban, NuLabour are true to their Communist roots in not being overly keen on private property rights.

The National Union of Students (NUS) has campaigned to keep the planning laws unchanged, arguing that students should be free to live close to one another in communities.

"We would welcome these proposals if they were about improving standards of student accommodation, but we fear that they actually just amount to unconstructive headline-grabbing, said Wes Streeting, the NUS president.

"If John Denham is in fact planning to clamp down on houses of multiple occupancy in this manner, he will be forcing students to pay private companies to live in ghettoes away from the rest of the community, or to find accommodation in the unregulated market. This will do nothing to improve community cohesion."

Indeed not. Much though it may amuse me to see students getting yet another shoeing from Labour—knowing the number of students who continue to vote for the socialist filth (despite the tuition fees, the abolition of grants, the measuring of student loan interest rates at RPI inflation rates, and the devaluation of degrees through low standards and flooding the market with graduates)—one also must have some sympathy with them.

Because, in many university towns, rental prices are pretty high. NuLabour have, of course, contributed hugely to this: not only through allowing (indeed, relying on) a massive housing bubble that has driven prices through the roof, but also through forcing universities to take more students. More students means more demand for housing: and with planning laws as they are, more demand for housing means higher prices.

The simple fact is that, for many students, having many people in the same flat is the only way to afford to rent that flat in the first place. In my second year at Edinburgh University, for instance, I lived in a flat with four other people—and we were still not very well off.

In one of the key changes, Denham is expected to tighten rules regarding the number of people not within the same family permitted to live in the same HMO, by lowering the threshold from six to three or four. Critics argue that a lower cap may drive out those dependent on current HMO law, such as a couple with a lodger who then decide to have a child.

A source stressed that Denham was not being anti-student, and that he recognised that only a minority of students are involved in the type of anti-social behaviour that can blight neighbourhoods.

OK, so Denham recognises that "only a minority of students are involved", but he is, even so, prepared to fuck over those students who are perfectly well-behaved and to ride roughshod over private property rights.

In other words, this disgusting little cunt's response is to punish the innocent majority for the sins of a guilty minority (assuming that you accept that they are guilty in the first place). Not only that, but he is perfectly prepared to destroy one of the absolute fundamentals of civilised society along with it.

How very spiteful. How very unwise. How very totalitarian.

Do you think he'll extend this idea to other groupings which tend to live in enclaves. For example those who share the same religion?

"A source stressed that Denham was not being anti-student, only that he really fucking hated those money grubbing, good-for-nothing, bohemian student bastards."

"lowering the threshold from six to three or four."

I'm pretty sure that would mean in many "HMO's" there would be extra rooms completely unused soaking up cash for no purpose.

"Some residents also argue that students upset the character of an area by ignoring the community in which they live."

I'd argue that without students there wouldn't be any fucking community. I live in Derby, and it's a safe assumption that the retail shops in the area are only sustained by student commerce, as well as the pubs, clubs, coffeehouses, art centre, cinema, convenience stores, blockbuster franchise, etc, etc.

Not to mention, us studenty folks constantly encounter "I've got nothing against students, I just fucking hate students" rheotoric from retail centre workers who are only in a damned job because we spend money in their stores, who otherwise contribute nothing to the "community."

The only real things that aren't probably held up by students disposable income (As students have a tendency to put clothing and drink purchases over food, often) are the local gay sauna, post office (For the numerous residents on the dole) and the strip joint next door to the latter.

People who argue in favour of the "local community" against students are twerps who seem to thing revenue being brought into an area is somehow a bad thing. Wake up and smell the coffee - There isn't a local "community", it's a myth put about in order to curtail liberties - The only communities are ones which exist in multicultural blocs, something that's been part of NuLabours legacy. Denham wants to take one such block and smear it in a thin layer across an area to the detriment of all in it.

I notice that while the locals whine like mules about the students, they are quite happy to accept the student money that comes with them, the money that funds the local shops, bars and public transport. In a town like Lancaster, where I went to uni, it's dead in the holidays which would suggest that without the students it would be dead all year round. Jobs would be lost, businesses would close and a cheap source of labour in term time would be lost. But hey, don't worry about it, Mrs Bucket has complained that someone has pissed in her begonias so we better get the whole lot of the book-carrying tequila-swiggers banned eh?

I lived for two years at university in a shitty little house with five other none-the-less awesome people. In essence, I paid £262.50 a month for a tiny bedroom and a sixth of a kitchen in a mid-terraced house with an overgrown concrete square where the other houses had gardens.

John Denham isn't even the MP for the studenty bit of Southampton; that would be Alan Whitehead, who -- despite being authoritarian and collectivist -- actually turned out to be one of the least corrupt MPs. I shall write to him and instruct him to have strong words with his colleague.

Substitute 'student' for Pakistani, Bangladeshi, immigrant or whatever in Denham’s policy and see if would be acceptable under Labour’s dogma.

For that matter, imagine the venom and bile that would be spouted if BNP councillors, say, tried to use the local planning system to set up "areas of restraint" against specific elements of the community living in HMOs.

Simple solution - every student in Southampton should write a letter to him, saying that they will not vote for him at the General Election.

(according to this site:
http://www.management.soton.ac.uk/StudyOpportunities/ug/open-day/southampton.php)

Just one in four needed to kick this slimy shit out, even if (a HUGE if) everyone else votes the same way.

Feel sorry for students in London, who not only have to pay very high rent (I didn't complain about it when I was there... kind of knew it was coming) but also have to battle with the fact there aren't *that* many 'student enclaves' in the capital. So improvising with a family-size home is pretty much all they can do.

NuLabour seem to really, really, fucking hate students. The way the Labour government has treated students over the last 12 years has been both appalling and truly bizarre, given the constant bleating about wanting 50% of young people to go to university, pouring tons of money into schemes to encourage (read: push/cajole/scare) young people into going, and then doing all they can to make it impossible for all those whose parents don't have pots of money they can afford to throw about at a moment's notice (quite literally, for some of the people starting this year with the utter balls-up of the student loans processing system).

Why any student, certainly from the last decade, would vote for them now or ever again in their lives is beyond me. I bet this year's graduates certainly won't be.

Students' have never bothered me even though my area is full of the buggers.

Some are even quite shaggable.

I feel much safer walking the streets with them lot as opposed to the followers of everyones favourite relgious cult.

Amazing what you can get one to do for a bag of chips and a pint of wife beater.

Jew-Labour is dead!
John Denham like Gordon Brown is a well paid alchemist. New Labour was a treacherous political party, catapulted to power, by wealthy jews; who were no different, from Thatcher's kosher Centre for Policy Studies, the de facto Golders Green financed Mafia. The British Working Class, has had a gutful of pro-fig-digging Frankfurt School, miscegenation propaganda. And please tone down your controversial, offensive language.