Via The Lone Voice, I have found an article about Peter Davies, the (relatively) newly-elected English Democrat Mayor of Doncaster.*

He has made a punchy start which, if replicated nationwide, would lead to public sector bedlam. The question is who should be most worried about his success: Labour or the Tories? Because his message threatens both.

Within a week of his election, Mr Davies had slashed his own salary from £73,000 to £30,000, scrapped the mayoral limousine and abolished the council's free newspaper.

He has written to the Electoral Commission asking them to scrap two-thirds of Doncaster's 63 council seats in order to save the town £800,000 a year.

'If Pittsburgh can manage with nine councillors, why do we need 63?' he asks. 'They each get a basic salary of £12,590 and we have only eight council meetings a year anyway.'

Deeply sceptical of 'green claptrap', he must be the only mayor in Britain who wants more traffic in his town. He says it will boost business and has just announced plans for more parking spaces and an end to bus-only routes. 'Like it or not, we live in the age of the car,' he says.

He wants to cut all 'non-jobs' in his 13,500 workforce - such as platinum-pensioned 'community cohesion officers' - and aims to shrivel future pay deals for council executives.

Much as he likes his chief executive, Paul Hart, he says his £175,000 salary is 'a joke' and that any successor can expect half.

'Don't believe that stuff about "having to pay the best to get the best". It's arrant nonsense - look what it did to the City,' he says.

And he is in the process of 'de-twinning' Doncaster from its five twin towns around the world. Twinning, he says, is all about free holidays for councillors and their staff. On taking office, he was amazed to discover that the council had agreed to pay a £2,800 hotel bill during next month's St Leger race meeting at the local racecourse.

The money is for entertaining councillors from Herten, Doncaster's (soon-to-be-ex) twin town in Germany. It was too late to cancel the reservations, but Mr Davies will ensure the exercise is not repeated.

'Racing happens to be my passion, but I don't expect the taxpayer to fund it,' he says.

While these preliminary cuts may be local government heresy, what has really marked out Mr Davies for liberal opprobrium is his gratuitously provocative assault on what he calls 'the culture of political correctness'.

He has scrapped all future funding for Doncaster's annual Gay Pride event. 'I'm not a homophobe, but I don't see why council taxpayers should pay to celebrate anyone's sexuality,' he says.

He has scrapped funding for council translation services on the grounds that people should be encouraged to learn English. And he has scrapped the word 'diversity' from his list of cabinet portfolios.

'Going on about diversity causes racial tension, it doesn't improve it,' he says. 'The Government has just admitted that gipsies should be given special treatment and that only makes people angry. I want every citizen of Doncaster to be equal.'

As the article says, Mr Davies's "message threatens both [Labour and Tories]" in a big way. It shows both parties up as being essentially ineffectual—whether through incompetence or, more likely, design.

Because all of Davies's cost-cutting—cost-cutting that does not affect front-line services—rather makes a mockery of the constant assertions that governments cannot make efficiency savings: what it actually reveals is that governments will not make efficiency savings—either they lack the balls to do it, or they are just too fucking lazy. Or, of course, they are just incredibly corrupt and have no interest at all in saving the taxpayer money.

And, as we all know, the issue of cutting public spending has to be the priority right now. The public finances are in an appalling state and we simply cannot afford to keep spending at the current rate—the interest payments alone are creeping near to £40,000,000,000 per annum (roughly £1500 per year for every household in Britain).

As such, I shall be following Peter Davies's plans with interest: what I would most like to see is how much he is able to cut as a proportion of the overall council budget. If Davies is able to cut council spending by, say, 15% (and remember that it is councils that deliver most of the services that we take for granted) then I think it reasonable that we should expect government spending to be able to mirror this.

And even if that ball-less scrotum Cameron and his rat-nibbled Shadow Chancellor (that's George Osborne for those of you who may have forgotten) don't want to learn from Peter Davies's example, then maybe they could learn from Canada.

You are probably aware of the story by now, but in brief, over several decades Canada had developed a chronic fiscal deficit (see here for overview). By the early 90s its public sector debt burden had reached nearly 100% of GDP (Federal plus provincial deficits), debt servicing costs were rising, and the situation was becoming unsustainable.

But at that point, a new Federal government was elected, and - miracle of miracles - it actually managed to get a grip. It cut spending, and returned Canada to fiscal surplus for the first time in a generation: 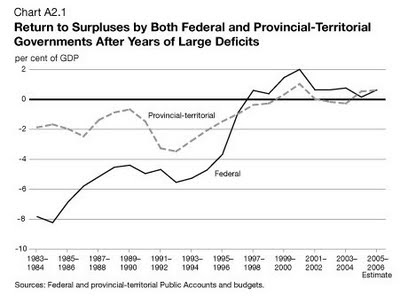 A fantastic job, and an inspiration to us in our current difficulties.

And yet we have heard very little from Call Me Dave and his merry men on precisely how the Tories are going to try to balance the books. Yes, yes: Cameron enthusiasts tell us that the Conservatives are remaining schtum for political reasons—but the trouble is that most of us suspect that they are, in fact, keeping quiet because they haven't got a fucking clue what to do.

And they really haven't got very long to sort it out.

* I have heard about this chap before, but the last time that someone emailed me about him, I was unable actually to find a proper MSM article—just a series of blogs linking to other blogs.
By Devil's Kitchen at August 31, 2009

Peter is doing a fantastic job. I voted for him in the Mayoral elections, and UKIP for the Euro's. I've seen him in meetings and he has no time for 'political speak*' and has all the time in the world for genuine talk.

*You know the bullshit in the budget, where 'SOCIAL PROTECTION' takes up the largest chunk. Social protection actually means us working muppets will protect the workshy, lazy and downright fuckfaced bastards who refuse to get a job.

Peter Davies will be this season's fanatical hate figure for Metropolitan Liberaldom. I predict half of the BBC will be combing his bins and expenses for any sort of scandal.

What a great bloke. I've got to support this chap and people like it.
Can't there be some central list of sensible decent candidates we can support across party lines? Somewhere for UKIP and LP and pissed-off Tories like me to place our votes when numbers or corruption mean we'd be wasting them elsewhere?

Good on Peter Davies, the only political figure in this country who seems to be in it to do good rather than relocate treasury money into their current account. Good on him. If only someone like that was standing in the next election this country might stand half a chance of pulling itself out of the merde.

Davies is a ridiculous charlatan, and I'm disappointed you've fallen for him (I'm obviously not at all surprised that the Daily Hate's running a hagiography of him).

Most embarrassing political interview ever.

The only positive thing about the eejit is that, as with BNP councillors, every idiotic thing he does serves to demonstrate to the general public that the far-right shouldn't be allowed anywhere near anything resembling power.

I'm also disturbed by the 'we need people in it for The Good Of Society rather than for the money' message.

Bollocks to that: everything good that's ever happened, that distinguishes us from cavemen and tree-dwellers, was created by people who were in it for the money.

Meanwhile, people in it for The Good Of Society created Calvinism, Nazi-ism, Stalinism and New Labour...

John B
"everything good that's ever happened, that distinguishes us from cavemen and tree-dwellers, was created by people who were in it for the money."

Much [though not all] great literature was done for the love of it - for this present thrill of writing. Much courageous soldiering [ and don't tell me that that's just caveman stuff!] was done for love of family and friends and an idea of home.
Every parent who worked themselves harder than they should to feed or educate or keep their children from drudgery did it for love - money was only a tool.
And every act of giving and risk such as this was not motivated by money.
All the beauty of the Church and the irenic actions of mediaeval bishops to reduce the horror of war and the very idea of human rights created by a cleric were not done for money.
Big loyalties can motivate people into dangerous and bloody movements, it's true, but day to day a great deal of good, even between strangers as well as family and friends is done through, and for, things other than money. Big movements abolished slavery - for the first time in thousands of years: motivated by love and enforced, in the end, by bayonets and cannon fire. Wondrous as the Invisible Hand is, there really are more things in heaven and earth than are dreamed of in your philosophy.
Love [of various sorts] works wonders every day.

Also sex. the things a man will do to assure his supply of sex. No cash involved. ;-)