The telescreens don't have an off-switch... 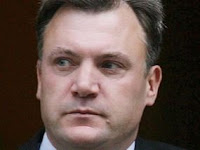 Blinky Balls: does he really get off on watching chavvy women having a shit in their own bathrooms? Only Yvette Cooper can tell us...

... although I wish to god that Ed Balls did, the winky-eyed cunt. Have you seen the nictating bastard's latest intrusive scheme?*

The Children’s Secretary set out £400million plans to put 20,000 problem families under 24-hour CCTV super-vision in their own homes.

They will be monitored to ensure that children attend school, go to bed on time and eat proper meals.

Private security guards will also be sent round to carry out home checks, while parents will be given help to combat drug and alcohol addiction.

Around 2,000 families have gone through these Family Intervention Projects so far.

You know what? Maybe it wasn't such a good idea to send these fuckers a copy of 1984 each—although we did inscribe, in big fucking letters, this is not an instruction manual.

Still, you have to hand it to Blinky Balls—he's responding to a very real problem. Oh, wait...

Ministers hope the move will reduce the number of youngsters who get drawn into crime because of their chaotic family lives, as portrayed in Channel 4 comedy drama Shameless.

Yes, because real life is just exactly like "comedy drama Shameless" and, given that, putting people under permanent CCTV surveillance in their own homes is absolutely the most proportionate response, isn't it?

No, it isn't! What the fuck is going on?

Sin bin projects operate in half of council areas already but Mr Balls wants every local authority to fund them.

He said: “This is pretty tough and non-negotiable support for families to get to the root of the problem. There should be Family Intervention Projects in every local authority area because every area has families that need support.”

Pupils and their families will have to sign behaviour contracts known as Home School Agreements before the start of every year, which will set out parents’ duties to ensure children behave and do their homework.

Or what? What will happen to them, precisely, Ed? You'll spy on them all day?

Yeah, you'd like that, wouldn't you? I bet that's what you do all day, isn't it? I can imagine you, Ed, your eyes bulging (even more) at the screen as you watch that dirty, dirty, dirty slapper Ms Smith showering lasciviously in front of you—you rubbing your cock through your pockets (because to touch the flesh would be a sin) whilst Ms Smith is rubbing her ample and dirty, dirty, dirty devil's dumplings with the soap. Grrrrrr, get an eyeful of that, eh, Ed...?

UPDATE: as John B points out in the comments, it seems that my caveat* was justified and the whole CCTV in their own homes thing seems to be a total fabrication by The Express. This should not be taken as any kind of confirmation, or otherwise, as to whether or not Ed Balls gets off on watching women having a poo.

You've also got the VOO as well!

Apparently our prisons are doing such a bang-up job, and our criminal justice system works so amazingly well, that people need punishing after they've done their time.

If they're still regarded as dangerous, well they shouldn't be on the fucking street. I wonder when the first VOO'd up criminal will commit another violent crime? The papers will just love that!

"this is not an instruction manual"

Orwell lived in a time when TPTB hadn't perfected spin and there was no curtailment of the 4th Estate to keep the government in check.

His 1984 was more a prophesy, based on his knowledge of the underground fascism/communism movements - that were afoot at the time - than a novel.

It was a warning.

What now? What can you do?

Well, you can join Douglas Carswell in his "open source" government movement (see his blog) and you can help air these issues.

I'm serious mate, get the fuck out while you still can. I saw the writing on the wall and prepared to leave 18 months after Blair took power: best thing I ever did. Having said that, nowhere in my wildest imaginations did I think that ten years down the line there'd be government-mandated surveillance cameras in peoples' houses. This is probably the most remarkable achievement of this Labour government: picture yourself in 1997 trying to conjure up the most hallucinatory paranoiac nonsense you can think of (negation of double jeopardy; habeas corpus watered down; jury trials restricted; not being allowed to photograph a copper; being watched by a handy fraction of the whole world's CCTV cameras; being subject to state monitoring in your own home). You would have sounded mental. BUT ALL OF IT HAS COME TO PASS. Oh Christ, oh alabaster Jesus on a cocking pogo stick, how I want them all to just fuck off and die.

I had a little blog on this just the other day.

How long before the "best of 12 year old little Sallys toilet time" hits the web?
Or "15 year old Suzie Vs the football team"?

They are sick depraved cunts, the story literally made my scalp crawl as I read it.

200AD had judge Dredd, but at the moment its hard to tell whos more fascist... I allready know who was more fair.

Hey, why not? The state owns these people, they're kept pets, so why not watch them? Why not stick a giant hamster wheel in the house too? If people are prepared to live as slaves to the DSS cheques, then why expect to be treated as free individuals? Fuck em. If they want freedom, work.

I read a slogan about that once.

I don't have problem children (as far as I know) but I was first asked to sign one of these about seven years ago along with every parent at my childrens' primary school. There was a great deal in the first draft about the pupil's and the parent's responsibilities and "doing what adults tell you to do" etc., and very little about what the school is supposed to do and its responsibilities. Many signed the agreement. I refused, but eventually signed a heavily modified version after succumbing what I might choose to call "institutional bullying" ... but which I don't!

To my mind, we have ceceded our responsibility to resolve conflict by labelling the upshot of conflict as bullying and asking/allowing the State to intervene. I am sure that there are many bullies out there and they do need to be dealt with, but this term is now used to cover anything from when a pupil is told by another one, "I don't want to hang around with you anymore" to the more serious stealing of lunch money at knife point in the playground. The accepted definition of real bullying is being ridiculously widened to include completely inapplicable events. What I find even scarier is that adults are increasingly complaining about bullying by workmates etc. The country is becoming spineless, depending ever more on the state to resolve what amount to differences. This co-dependence is encouraged by government as might be expected. And I use the term in the pejorative sense: http://en.wikipedia.org/wiki/Codependence .

I like the way that people are getting excised about a complete fiction, made up by a joke rag that qualifies as a newspaper to a slightly lesser extent than the Sunday Sport.

I posted about this on the LPUK blog a couple of days ago after reading the article and being angry.

After thinking about it for a minute then phoning dcsf, the home office, and the Express I can confirm that what John B says above is correct.

Family intervention projects do exist and are a bit worrying for the average libertarian but they do not involve CCTV in private homes. Any CCTV is in secure units owned by the council and families enter into these contracts violuntarily upon signing a contract (I have no idea what the consequences of not signing are). The number of 20000 quoted by the express is also apparently a fiction- 20000 is the total number expected to be involved with FIPs when they are rolled out everywhere, not the number who might be placed in secure units with CCTV. FIPs are a tiered approach apparently.

While there are problems with the whole FIP idea, I think that it pays to check sources carefuklly, especially when they happen to be the Express or Mail. It seems that the Express journalist who wrote this particular story read the press release on the dcsf website and then used quite a lot of imagination to flesh it out. A shame really.

Edit re: my post above- I commented on the forum, not the blog

Very funny DK. It is like punching a man over and over until he is bleeding and then locking him up in a hospital so that he can get better.

Far better to have a society that doesn't create these kinds of people.

But Balls is an idiot. And he's a politician.

Doesn't it strike people as scary that even if the CCTV story wasn't true, it was believable?

I doubt if the gimlety eyed little porker will hold on to his seat anyway.
True ?
Bye.