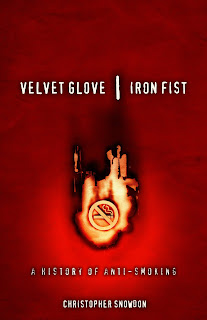 A little while ago, I mentioned the launch of Chris Snowdon's Velvet Glove, Iron Fist—A History of Anti-smoking (to which your humble Devil contributed the cover). I have been reading this great work, and can only echo the sentiments of Simon Clark at Taking Liberties...

I can't speak highly enough of this extraordinary labour of love. I've read many books on smoking and this is best by far. It's a superb read. To use that old cliche, it's a page-turner, which is some achievement. It's packed with information but it's also very readable - serious yet hugely entertaining.

Better still, this is no fire-breathing polemic. The amount of research that has gone into it is staggering. And the tone is moderate throughout which is important because it will appeal to a far wider readership.

The book is really very good; it is being launched on the 22nd June, but you can pre-order it on the website (without Chris being hit by Amazon's exorbitant commission). Plus, of course, every copy of the book pre-ordered through the site will be signed by the author...

I highly recommend that you do so, even if such books do not normally appeal to you: as a study of pressure politics, power play and sheer mendacity, it is most instructive. But also, as Simon says, it is a damn good read...

UPDATE: Taking Liberties outlines the grilling that Tory MSP Mary Scanlon gave the head of ASH Scotland recently. This is textbook fake charities stuff (yes, that site will be back up later this evening, hopefully) and reflects precisely the reasons that I had for setting the site up in the first place.

Mary Scanlon (Highlands and Islands) (Con): The ASH Scotland evidence is highly critical of the funding of the lobby groups from which we heard last week. We asked all the lobby groups where their funding came from and I think that we are aware of how they are all funded. It is only fair that I ask you where ASH Scotland's funding comes from.

Sheila Duffy: ASH Scotland is a registered Scottish charity, so our accounts are publicly available and audited. In common with the national charities that deal with drugs and alcohol, we receive substantial funding from the Government. Because of that, we are reviewed periodically by the Government, which commissions an independent review to look at our cost-effectiveness and funding. I can certainly give you a breakdown of our costs for the previous financial year if that would be helpful.

Mary Scanlon: You said that 90 per cent of your funding comes from the Scottish Government. How much is that in cash terms?

Sheila Duffy: In 2008-09 it was £938,000, which went to support a great deal of project work in areas such as inequalities in relation to tobacco, youth development work, partnerships and the development of training for smoking-cessation services.

Sheila Duffy: No. Under the terms of the funding, we may not use it for lobbying.

Mary Scanlon: You receive nearly £1 million from the Government.

Mary Scanlon: We heard from those groups last week; they got a good grilling from us all. You are being given nearly £1 million in order to support the Government's national policy on smoking.

Sheila Duffy: I must take issue with that statement, because the money that we are being given is to support objectives and outcomes that are in line with national health policies, including—

Mary Scanlon: Which are determined by the Government. The Government determines national health policies and it gives you nearly £1 million to lobby on those policies.

Sheila Duffy: I must be clear about the point that the public funding that we receive may not be used for lobbying purposes. It is for delivering services and projects that are in line with public health policy in Scotland.

Mary Scanlon: So, of the nearly £1 million, how much is used for lobbying? Can you give us a rough guesstimate in percentage terms?

Sheila Duffy: I have not looked at the exact percentage, but a really tiny percentage of direct spend goes on lobbying. That work tends to be shared with other health charities whose aims are similar to ours.

Of course, since ASH Scotland was set up by the government in order to support government objectives, they do not need to spend lots of their cash on lobbying: the government is already on their side because they are simply an unaccountable arm of the government. They are, in fact, a textbook example of a fake charity.

And Mary Scanlon might be my new political hero—I wonder if she is aware of fakecharities.org...?
By Devil's Kitchen at June 06, 2009

If you haven't read Booker & North's "Scared to Death", it covers the passive smoking scam in well researched detail.

In particular, it details Enstrom and Kabat's exhaustive study on passive smoking, which was disowned by its sponsors - the American Cancer Society - when it became apparent that the results were not going to be of their liking. A must-read for anyone wishing to refute the "consensus".

Apologies if this is old ground!

To be honest, Sheila Duffy comes out well on top in that exchange. You may take issue with the idea that they don't use government funds to lobby, and believe she's lying, but she stated her case (that any lobbying is done with independently raised funds) very clearly each time that Mary Scanlon (repeatedly, with no new angle or insight) asked her about it. She didn't evade it and she was very plain about where their funding comes from.

Agree with the fake charities campaign in principle, but that seems a bizarre dialogue to use as evidence against ASH.

ASH Scotland only has 27 staff so how do they spend nearly £1M a year, are they a "front" for Tobacco Control.What do they do with the £50,000 they get from the British Heart Foundation and do the members of the public who donate to the BHF realise their money is going to ASH Scotland. If you are interested this link goes to the " External review of ASH Scotland " but take a close look at who carried out the review.
http://www.scotland.gov.uk/Publications/2008/08/29113558/0

On the subject of funding, here is an interesting letter from ASH to Glaxo Smith Kline (GSK) that shows one of ASH’s principle tactics of knocking out all dissenting voices in the anti smoking campaign. It also shows that in 2001 ASH had a 'small' shareholding in GSK. How 'small' is not known - but seemingly sufficiently large to allow ASH to coerce and threaten the GSK board;

"ASH has a small shareholding in GSK and I will be attending with others to question you and the Chairman on this situation. I hope that Mr. Bonham will have already announced his departure by then and that such questioning proves unnecessary. More than anything, I would like to resume normal and constructive relations with GlaxoSmithKline."

This sounds suspiciously like; "Do what you are told or we won't promote your products!"

Is anyone aware of ASH admitting to having shares in big Pharma? I suspect that funding of ASH, CRUK and BHF by the pharmaceutical industry for their ‘mutual benefit’ will be substantial - but lost in multiple cross funding and dubious accounts.

Anyone up for investigating this?

she stated her case... very clearly each time

Stuff and nonsense! She employs all manner of qualifiers, á la Bambi. Such as: "a tiny percentage of direct spend goes on lobbying". WTF is 'direct spend'? Sounds like shifty cost centres to me.

What does ASH do which isn't lobbying and politics?

All this from a " Registered Charity".

"The formation of alliances and campaigning

2.24 In October 1999, the Scottish Cancer Coalition on Tobacco ( SCCOT) was created by ASH Scotland as an alliance between itself and the leading Scottish Cancer Charities and Scottish branches of UK Charities.
2.25 In 2000, ASH Scotland received funds from the Scottish Government to undertake a consultation process to explore the need for a national tobacco control alliance and the role(s) that it might hold. It then went on to form the Scottish Tobacco Control Alliance ( STCA) with Scottish Government funding, bringing together a multi-disciplinary, multi-sectoral body of over 120 organisations concerned with the impact of tobacco on Scotland and its people.
2.26 ASH Scotland set up Scotland CAN! (Cleaner Air Now) in May 2000. This brought together a wider group than SCCOT and began campaigning for legislation to restrict smoking in public places. In November 2004, it was agreed that SCCOT would no longer exist as a separate coalition, and that it would instead reform under the wider coalition of SCOT (the Scottish Coalition on Tobacco). Scotland CAN! also came under this umbrella."

I'm sure that you will or have made her aware. It is fucking scandalous and the ASH woman sounds just like a politician. I wonder why? Funding or expenses?

I'm not sure the narrative is quite correct here. People seem to be too fixated on the state as instigator; in reality it is I think more honest to say that the state is the bitch of special interest groups such as the Temperance Movement. It is the TM, such as ASH, who decide government smoking policy, and then get money to implement it, rather than the government deciding smoking policy then giving ASH some money to support it.

In the modern corporate state, government is actually very weak. It does the bidding of corporatist bodies, implementing their laws, funding them, and providing them with legitimacy. It is effectively impossible for a Health Minister, however they personally feel, to do anything but implement temperance.

Fully agree Ian B.
I would use an accurate analogy of the cuckoo. Once the cuckoo egg (ASH) was installed in the nest (of government advisers), it proceeded to grow in strength and ejected all the other eggs and chicks (moderate voices) from the nest. Once the bird (ASH) achieved total control of the nest it became a parasite, growing in strength as the host grew weaker, demanding ever more influence and sustenance.

The unwitting host mother (Government) remains in denial that the bird in their nest is obviously not of their making and continues to pander to its (ASH’s) demands, apparently unaware of, or unwilling to recognise, the monster in their midst.

fakecharities.org - not accessible. Says it's under contruction. Is this a fake expose site?

Kin_Free, I like your analogy a lot, and I fear I may well steal it for use elsewhere in future :)

The lobbying war in Scotland.

Watch this video of the Health & Sport Committee Meeting on 10 June 2009. Comments by the Minister for Public Health ( Shona Robison ) regarding evidence are particularly worth listening to.