Your humble Devil apologises for the slow posting—call it a combination of extreme busyness and blogging fatigue (I want a general election if only because there are so few ways left to insult the bloody incumbents).

Anyway, last weekend I was in Oxford for various reasons—most of which turned out to be drinking, as it happens. Now, long-term readers may remember the moderately successful yet jokey campaign that a few of us evil bloggertarians started—after he had slapped yet more tax onto booze—to get Alistair Darling banned from pubs: your humble Devil even wrote a short little fantasy about it.

Like everyone else, I suspect, I had pretty much forgotten about it; in any case, I had never actually seen, with my own eyes, one of my posters in a pub (although people sent many photos).

So, imagine my delight when I wandered into the King's Arms in Oxford last Saturday to find not only that they had one of these posters prominently displayed, but that they had also had it properly framed. Naturally, I had to get one of the staff to pose with it... 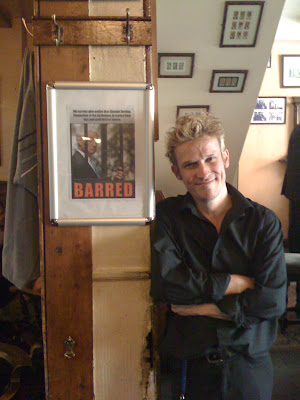 According to this young man, the poster amused the punters no end...

UPDATE: via the Facebook Group (3,861 members), I see, somewhat belatedly, that Punch Taverns got behind the campaign...
By Devil's Kitchen at May 30, 2009

It's fairly common around here—both the pubs I go into regularly still have it up, and I see it in others quite a bit on those occasions that we go somewhere else.

Then, we tend to go into real ale pubs a lot, they seem to be more political and prone to getting involved in campaigns than your typical chain pub or lager pub.

I keep meaning to expand it to get both the local MPs banned as well, given they keep voting for the crap, but that would require effort.

Next time you knock something up like this in a few minutes? Watermark it or something, a nice little grinning devil in the bottom corner would do wonders for your profile ;-)

I remember the K-A quite well, sort of inserted into a corner of Wadham.

Cheapo beer. We used to be able to afford to go there, a bit, and get rat-arsed.

At lunchtime, they did pie (don't ask what, not in the 21st century please) plus beans and chips (microwaved of course, what did you expect? This was Wilson's white-hot-techo-revolution)for three shillings. The Lamb and Flag was three and six but was nearer the labs by about 500 yards, and the beans were better.

Does it still smell?

Sixpence half a century ago is now inflated to £1.25 - that's what governments do for you, at a Parliament near you, and that's without the Weimar republic, or Robert Mugabe operating.

Excellent. Be bloody offensive if you popped your pint down and that cunt started a conversation.

My locals still have them up, the Facebook group is still growing, and there's always the consolation of this.