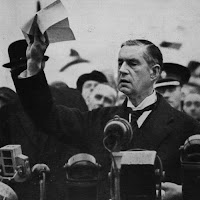 "I have in my hand, a piece of paper—it's a cheque from Hazel Blears..." The one-eyed Scots idiot solves the expenses crisis, courtesy of Tory Politico.

According to Iain Dale, Hazel "irritating little chipmunk" Blears—who has decided to cough up the £13,332 equivalent of Capital Gains Tax—was a little teary when interviewed on Sky News.

I'm watching Hazel Blears on Sky News saying that she is going to pay the capital gains tax of £13,332 on her house sale, even though she says it wasn't liable. It was an emotional interview with Sky's Jon Craig and she appeared that she might break down at any moment.

You know, I'd be pretty tearful if I had been caught cheating and then realised that I was going to have to pay £13,332 to the fucking taxman. After all, she must have thought she'd got away with it.

And let's face it, £13,332 is a pretty eye-watering amount of cash to find pronto—certainly, your humble Devil couldn't wave a cheque for £13,332 about and even pretend that I thought that it would be honoured.

The Corby MP said he had kept to the rules but stories about his expenses had caused a "massive blow" to his integrity and standing with voters.

He said: "This issue has fundamentally changed the view people have of me and that is something I cannot bear."

To be fair, Mr Hope has said, in the accompaying interview, that it will be difficult to find the money, but I guess that he feels that it is a good investment.

Your humble Devil is glad to see the money being paid back, although I have some reservations. The first is that, believe it or not, I feel slightly sorry for the poor fuckers—the amounts of money are small change to the Exchequer but pretty large for an individual to find.

It is the fact that these fuckers decided that they could—and would—claim for any old crap, not the fact that what they claimed cost £50,000 or 5p. Paying back the money claimed does not actually remedy the fact that trust—and any semblance of personal integrity—has been destroyed.

These buggers will never be trusted again. And, yes, the innocent are being tarred with the same brush. Well, they know what they can do? Publish their expenses, in full, on their websites and then let the general public see that they have not made ridiculous claims.

This might be the right time for your humble Devil to ressurrect his short-lived resource website, honestmps.org...
By Devil's Kitchen at May 13, 2009

well Yes Devil. Pretty good that the chipmunk coughed up the evaded CGT but let's not forget that she has still pocketed more than £30k profit, TAX FREE, from a "leveraged" deal.SO leveraged that the tax payer bore the whole cost!!!
Even better, IF she is deposed at the next election she will get a "golden parachute"
She is far from alone on ALL counts.
Then again according to radio 4 yesterday (yes I'm a boring twat) "flipping" is legally available to all fortunate enough to own more than one home. So maybe she didn't actually "evade" but simply avoided (which is legal)
As for "it is all within the rules" well that IS complete shit. Even the flawed rules say "wholly and necessarily incurred". Which idiot determined that plasma TVs are "wholly and necessarily..." and much else!
I, for long, had to work away from home. I had to account for every penny spent to HMRC and prove it necessary. My garden? Well I paid someone from AFTER TAX income to keep it tidy whilst I was away.

Afraid I'm with your earlier comments. The effing cheats should adorn London lamposts. I may even supply the rope!

In the case of stuff that was “ within the rules”, by what mechanism can you arbitrarily increase what you owe to the IR ? Unless you declare that you have previously lied (an offence ) and offer a correction to previous returns, you can overpay, but your tax account will just be in credit.

If you send a cheque to HMRC for a liability which does not exist (in tax law), HMRC will either pay it back or put it to the credit of any future (legal) tax liabilities which arise. Yes, there's an arrangement by which idiots can cough up hard-earned money "to reduce the national debt" but it's doubtful that this applies in the case of Ms Blears.

I suspect (although I can't prove it either way and, BTW, a receipt from HMRC is meaningless since it always sends a receipt even if it intends to repay the money) that this money will be coming back to Ms Blears one way or another.

Yes anonymous I totally agree and I knew that. So it is "gesture politics" and totally hypocritical or possibly badly thought through but then we come to expect that from our politicians.
HMRC, if it doesn't investigate Ms Blears, will likely return the money and we'll be non the wiser so it may cost her FA and she likely knows that.
Phil Hope? Well he has a TINY majority so maybe he is just buying an expensive insurance policy to try to protect his likely £400k income over 5 years.

umbongo/bewick - thanks, reassuring to know that I'm not going mad

I don't care about the money, so much is wasted by the civil service administration, IT projects, etc, etc, these expenses are the national equivalent of 30p under the cushions on the sofa.

It is the abuse of trust and complete disregard for propriety that angers me.

If I went to a car dealership this afternoon and just drove off in one of their motors, I don't think an enthusiastic 'I'll pay for it now!' when the old bill turned up would cut any ice.

anonymous. you may BE mad (as in seriously annoyed,insulted, cheated,furious) as am I, but you are not GOING mad.

TOMORROW is probably the finale and I expect the Telegraph will expose the Balls-Coopers, the Keens, the Wintertons and a few others.

The Tamils may even be ejected from Parliament Square (I hope)in double quick time.

But make no mistake, The Devil and Guido, and others HAVE been exposing the cheats for some time now but MOST people never knew. NOW they do and the anger even in my village shop is frightening.
Time for an election methinks

DK, you are getting soft in your old age. Don't you really see where this is going?

House prices are falling, so one person making a CGT payment for what must be the most egregious of all the abuses is to lull us in to a false sense of security. When the time comes for a few more to sell after the next election they will probably have to sell below what they paid.

They can then claim that as they were subject to CGT on profits why shouldn't they be protected when they make a loss?

Are they really going to pay it back or is this another "pledge". and the gurkhas too. honest.

I just dont believe a word of it anymore.

This MP looks like an honest man, by God he's angry.

What makes me laugh is the suprise from all the party leaders. My god ! all my MP's have been fiddling taxpayers money? Why wasn't I informed about this ? yeah right ! fucking bullshit. And what about them paying their debts to society, by being prosecuted for fraud ? I personally think the UK public should now make a move and call for Parliament to be dissolved and get these corrupt fuckers out of our lives once and for all.

It's turned into high farce now, and it's great.

That it became acceptable to claim for anything more than basic requirements proves that these vile cunts need hanging.

Just seen that thief Phil Hope on the news. I thought he was going to cry. I suppose £42,000 coming out of the bank would be a bit of a pisser, but it's not his money in the first place.

Despicable cnuts, the lot of them.

On behalf of my fellow armed robbers, I wish to apologise for inadvertently claiming three million pounds from my local bank at gunpoint. I sincerely believed that I was acting within the rules, but have since discovered that the use of a shotgun to access other peoples' bank accounts might be considered inappropriate under the current regulations. It is an honest mistake that anyone could have made.

However, now that my house is surrounded by armed police I realise that I should give the money back even though I am confident that I have done nothing wrong.

...they will all eventually go into very comfortable retirement on OUR savings and NONE of them will ever see the inside of a courtroom, let alone a jail.
Don't forget to pay your Council Tax & TV licence!

Looks like Cam's cleaner was better than Gordon's (shared) cleaner.

Please urge your readers to sign this epetition demanding the resignation of Michael Martin as Speaker of the House:
http://www.gopetition.co.uk/petitions/michael-martin-should-resign.html

Nauseating! Gordo struts around imitating "Mr Strong" at the circus because he's "suspended Morley from the Parliamentary Labour Party": an almost totally meaningless gesture. Morley still receives his MP's salary plus, as it happens, his allowances plus - when he loses his seat at the next election - a nice payoff courtesy of you and me.

And let's face it, £13,332 is a pretty eye-watering amount of cash to find pronto—certainly, your humble Devil couldn't wave a cheque for £13,332 about and even pretend that I thought that it would be honoured.For Blears? She's a minister, on 90,000 quid a year salary before fraud and perks. So she's only actually having to come up with 2-3 months salary after tax.

Frankly, let's start paying local councillors for their public service, and thereby also ensure that they are not- like their Westminster counterparts- getting the most out of the system. I know many local councillors who are active in local politics putting many hours into local affairs and who get paid for supposedly working full-time in Third Sector organisations, creating not only conflict of interest between their different roles but also forcing the Third Sector to subsidize their public roles: one well-known example is Labour Councillor Antonia Bance working with Oxfam's UK poverty programme. The whole system needs over-hauling!

Hazel Blears is a dirty, hungry, ginger cunt who deserves to come off her lesbo motorbike at 200mph in a horrendous crash and die. Torch the House of Commons and roast all of the greedy, grasping, hungry cunts inside.

Hazel Blears, isn't she out of control?