Missive from the bunker 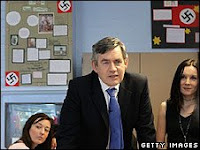 Gordon Brown: "I don't know what this 'National Socialism' is, but it sounds like an excellent idea."

Via Tory Bear (who concentrates on the hilarious swastikas), I see that Jacqui "Jacqboot" Smith has become the latest minister to subtly stick the knife in publically back the Prime Mentalist.

Home Secretary Jacqui Smith has become the latest cabinet minister to come to Gordon Brown's defence, amid continuing speculation about his leadership.

She said he was "right" for the country...

Well, Gordo is absolutely "right" for the the country—if you take the pretty fucking cynical view that the country is not only absolutely fucked but also full of miserable, micromanaging, barkingly insane (and not in a funny way), joyless morons with all of the charisma of a three-day-old, piece-of-shit Subway sandwich.

Even though Jacqboot does work in the Home Office—and so does have some excuse for thinking all of the above—it's a pretty contemptuous view of the country which she claims to serve, eh?

[Smith said that] Mr Brown was the "sort of politician that we need leading our country" at a time of economic crisis...

Well, to a great extent, the fat, ugly, monocular fucknut is responsible for the fucking awful mess that we find ourselves in so, really, he should be the one to clear up the mess.

Unfortunately, trying to pull the economy together again is far too important a task to leave to a cack-handed, economically-illiterate shit-for-brains like the Gobblin' King: whilst those who are waiting in the wings could hardly be described as inspiring, if the Cyclopean toss-rag had the slightest bit of dignity, he would listen to the 51,000+ people who have called for him to, please, just fuck off.

Oh, and take that moron, Jacqboot, with you, you wall-eyed cunt.

UPDATE: as regards the swastikas, Wrinkled Weasel reminds me that this isn't the first time that NuLabour have had a brush with embarrassing Nazi insignia...

However, I would like to make it absolutely clear that there is no connection whatsoever between a bunch of authoritarian socialists—who decided that the best way to Promote Prosperity was through a programme of massive public spending (largely financed through huge amounts of government debt), who undermined the traditional justice system and who illegally invaded sovereign countries—and NuLabour.

I wouldn't want anyone to get the wrong idea, you see. Even though it was the one-eyed, Scots idiot who launched that particular initiative too...
By Devil's Kitchen at May 05, 2009

You have got it in one. Brown never had the experience to be a Chancellor, much less PM, with his only previous experience being 3 years as a journalist for Scottish Teleivision. And waiting in the wings, Jacqui Smith academic, Alan Johnson, former postman and full-time union official, David Miliband, former researcher for the Institute for Public Policy Research.


Gordon Brown is useless and so is most of his cabinet. They have exhausted all possibilities other than calling an election.

I've never actually had a Subway sandwich. Are they any good?

Jacqui Smith wasn't an "academic", you stupid cunt. She was a fucking teacher.

Either way, she could do with some learning

Anon - 4.30 - yeah, they're alright really. They put sugar in the bread a la McDonalds but yeah, nowt wrong with them at all. You probably wouldn't go there if there was a proper bakers but they're tonnes better than supermarket sarnies and you can get olives and chillies in them.

They clearly have no shame do they?

I take it you don't like Gordon very much then?

Hang on there, a Subway used in a negative sense?

@ Anonymous: You are quite right, Jacqui Smith was indeed a teacher, not an academic. However, you have demonstrated your own ineptitude and cowardice by demonstrating that you can only resort to name calling whilst hiding behind a cloan of anonymity.

You forgot foul-tempered. Oh - and he swears a lot. Not that is necessarily a bad thing. Depends who he swears at.

Come on now---play fair --Subways are bloody good. If you have one you don't like you should be more fucking careful what fillings you pick.

And they are astonishingly similar all over the world.

I invite you to overdose on over-the-counter medication at your earliest convenience.

Hang the b'stards from the nearest lampost as quickly as possible.

I did a bit of Googling about the "progressive governance summit", although it signally failed to get reported anywhere. It appears (in answer to a Parliamentary Question) that it cost the taxpayer £250,000, for nothing.

Brown is a PR disaster. What the fuck do his minders do all day - carry his spare pants?

"What the fuck do his minders do all day - carry his spare pants?"Nah, he wears those on his head. And sticks pencils up his nose and says "ribbit".

gorgon brnwo ignored soud advice to get his eye treated.He ignored that advice and lost his eye..sounds like a very good reason why he shouldn't be in charge of anything more complicated than his fucking nostrils,the snot eating twunt.
I'm very sorry for voting this shower of shit into power back in 97.It won't happen again.