Harriet Harperson protests too much 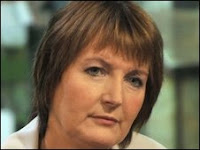 Harpy Harperson: evil old witch, destroyer of livelihoods and all round shitbag.

As Brown becomes ever more unpopular and embattled, Harriet Harperson—destroyer of jobs, evil old bag and target of insults—has made an important statement.

Good: now you know how we feel. And it's a good ambition to have, Harry darling, because you will never be Prime Minister. After all, whilst Brown is pretty fucking appalling, having a fuckwitted bigot such as yourself in the top spot would cease even to be amusing.

Still, one does think that maybe—just maybe—the miserable old harpy doth protest too much...

UPDATE: the Daily Mash's guide to the Labour non-entities has the right idea—as gloriously insulting as all of the descriptions of the NuLabour politicians are, their final person in the rundown is:

It's her official denial -- she wants the post and will go for it if possible.

I'm sure that beneath it all, Harriet would be only too willing to be the nations' official "Henna-Haired-Harridan".

Imagine the Labour Party with 5 years of Opposition and HH at the helm. What a twisted, venal, dysfunctional, irrational nest that will be. I can predict an exodus to LDs and the formation of an Old Labour vehicle.

She has made it quite clear that she will accept the leadership but only with modest reluctance and only if the party forces it upon her by acclamation.

Nobody wants her doing any job, private or public! She should just shut the fuck up and stay at home, cook, clean and... implement her policies onto her family.

She is a bitch with no idea of 'life'. It's down to her why my business is being screwed in the arse by council people with lots of red tape. I would bring the bitch up for High Treason. If only they still had the death penalty for treason - but thats why the Labour party ended that penalty in 1998, so they would all live. Fuck off Harpeaple