Stamp Duty is a huge tax: it raises little money (about £4 billion) but raises the price of a house quite considerably. Naturally, it is very difficult to avoid...

... unless, of course, you are an MP trying to build up a property portfolio at the taxpayers' expense, in which case you can simply ensure that other people pay the tax for you, i.e. us.

MPs are avoiding stamp duty of more than £10,000 on second and third homes by claiming it back on their parliamentary expenses.

They are claiming it in addition to furnishings and mortgage interest payments for homes they are allowed to keep after leaving parliament. The exemption from one of Labour’s most unpopular taxes is revealed in more than 1m receipts for MPs’ claims due to be published this summer.

Except, of course, that the person who keeps the asset at the end is not we taxpayers, but the MP involved. The disgusting, corrupt shitehawks.

Among MPs who claimed a stamp duty refund is Kevin Brennan, a Cabinet Office minister. He bought a flat in London in July 2007 and claimed back stamp duty of £10,200. “I was advised I could claim stamp duty by the authorities and did so for simplicity,” said Brennan, the MP for Cardiff West.

You fucking little liar: you didn't claim Stamp Duty against expenses for reasons of "simplicity"—you claimed it because you could make yourself £10,200 better off by sicking the taxpayer with the bill. You hideous, stinkingly corrupt, verminous cunt.

He said even if he had not made the claim, he would still have been entitled to the full annual allowance of £23,083 because of other expenses.

And that applies to you too, Rudi Vis, you thieving fucking charlatan.

RUDI VIS, the north London MP who is stepping down at the next election, has used his parliamentary expenses to help buy a £520,000 home for his retirement near the Suffolk coast.

Vis, 68, has taken out a mortgage on his London home to pay for the country property. Interest payments on the loan are funded out of his parliamentary expenses.
...

Vis is among 27 London MPs who last year claimed an accommodation allowance worth up to £23,083 to fund a second home.
...

By informing the parliamentary authorities that his main home had moved to Suffolk, he was able to claim the interest payments on the loan secured on his London home. Over the past two years, he has claimed more than £40,000.

And can you guess what darling Rudi's excuse is for this blatant larceny...?

“The rules are questionable,” Vis said this weekend. “But this is well within the rules and I would have been advised if it wasn’t.”

Fuck your rules, Rudi: you can take your rules and shove them right up your fucking jacksie.

If you think that "the rules are questionable", then might I suggest—were you not utterly morally bankrupt—that you refrain from sticking your fat, piggy face into the public purse, you shit?

As always, it is not just the Labour MPs who are busy stuffing their faces with our cash: the Tories are at it too.

Theresa Villiers, the north London MP and shadow transport minister, has also claimed her stamp duty. She bought a flat within walking distance of the Commons in January last year, in addition to a property in outer London, and was able to claim £10,350 in stamp duty on expenses. 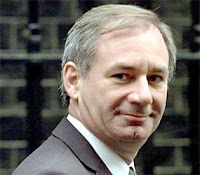 The big one this weekend, though, is that utter fucking hoon, Geoff Hoon.

The Cabinet Minister who sent Britain's Armed Forces into the Iraq war claimed expenses on his constituency house and rented out his London home - while living throughout the conflict in a palatial grace-and-favour apartment in Whitehall.

He used the opportunity to earn money from the London house he had declared to the Commons authorities as his 'main home' by renting it to a private tenant via a commercial lettings agency.

At the same time he claimed more than £70,000 in a 'second-home allowance' on his home in Derby, close to his constituency of Ashfield, Nottinghamshire.

In effect, it meant that during the war, and for three years afterwards, Mr Hoon had one home absolutely free, a second one covered by Commons expenses, and a third one which had initially been funded by expenses, paid for by rent.

And when he gave up his grace-and-favour apartment, he bought a new £635,000 London home and changed his 'main home' declaration which meant he could use his second-home allowance to help pay for it - and provide a home for his adult son.

Mr Hoon insists he has done absolutely nothing wrong and maintains everything was approved by the Commons authorities.

Now, according to the Times, the badger-faced moron is on the warpath.

Alistair Darling has called for an external body to govern the rules on MPs' expenses after fresh revelations about his Cabinet colleague Geoff Hoon reignited the controversy today.

The Chancellor confirmed that Gordon Brown would be meeting other party leaders to discuss how to handle the row, and admitted that the string of revelations were damaging to the Government.

Appearing on the BBC's Andrew Marr Show, he appeared to agree with calls for any fresh rules to be monitored by the Committee on Standards in Public Life, saying "there has to be some outside validation of this process."

So, Alastair, what you are saying is that the lot of you are so fucking corrupt—so steeped in thievery, larceny, dishonesty and immorality—that you cannot be trusted to govern yourselves.

The answer is that you cannot—you cannot be trusted. Like every Parliament, you are so corrupt and corrupting, there is now no option but to tear it down and start again. Once again I shall quote Cromwell's speech for, though the man was a bit of a shit, there have been few more eloquent—or relevant—speeches delivered in the entire history of our Parliament.

Or, to put it into the modern vernacular, you are irredeemably soiled, morally bankrupt and utterly corrupted to the very depths of your depraved souls.

Fuck off and die, you thieving fucking cunts.
By Devil's Kitchen at April 05, 2009

And this is only the expenses scam. Don't forget all of those other income streams; directorships(bungs), consultancies (bungs), under the table deals for questions, amendments or access, delayed pay-offs,tv appearances, newspaper columns, favours e.g. holidays, influence peddling for people wanting quango posts, the list is endless.

At the next election, surely only a clean sweep will do and it's no good electing another 646 of that battalion of troughers-in-waiting (mentioning no names) champing at the bit gorge themselves 'within the rules' on our cash and then shit on our faces.

Every single one of them is compromised if only by their silence. Why are we so hurt and suprised when they do exactly what the people who have a hold over them want and not what we want?

I dunno. If I could claim my stamp duty back from my employer when I buy a house, I would. But it should come out of the (capped) housing allowance. I mean if you're allowed to buy a house on expenses, then everything associated with the house should be claimable. The issue is that they should be allowed a second home expense at all.

Agreed - they either need to have a fixed overnight allowance for those nights the house is sitting, or provided rooms in a barracks/hostel.

Surely the issue here is not stamp duty per se, but the fact that it is the MP who gets to keep the house at the end of it and not the taxpayer.

They should do what the Foreign Office does when it posts its employees abroad; maintain a portfolio of houses owned by the taxpayer and allocate them to MPs whose constituencies are an uncommutable distance from London. Hooning thereby ended overnight.

The human capacity for self delusion is unending, I do think many of them actually are offended public opinion is no on their side.

Still a bunch of pig ignorant thieving bastards though.