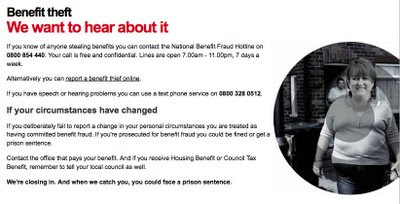 Jacqui Smith: "within the rules" but still defrauding the taxpayer.

The whole furore over that fucking whore's expenses rumbles on, as the Mail on Sunday reveals even more of the Home Secretary's profligacy.

Jacqui Smith has charged taxpayers for everything from a £39.99 barbecue to a £2.50 toothbrush holder—ostensibly to help her 'perform her duties as an MP'.

The beleaguered Home Secretary's extraordinary expenses claims also included a £14 doormat, a £104.56 patio heater for her garden and a £369.99 flatscreen TV.

You fucking thieving whore. How dare you?

In total, taxpayers have footed a £150,000 bill for the [Home Secretary's Redditch] property since 2001. Leaked copies of her receipts suggest she has been on a publicly funded shopping spree to kit out her home from top to bottom.

And this stinking piece of shit's defence...?

Her spokeswoman insisted: 'Everything that has been claimed for is within the rules. In the one instance where it was not, in relation to the films, the money has been paid back.'

Fuck "the rules"! These cunts make the fucking rules so of course this blatant looting is "within the rules".

As I have said before, I don't give two fucks about the rules: these fucking troughing whores are fully aware that they are defrauding the taxpayer—rules or no rules.

(And I don't see why Jacqui "thieving cunt" Smith needs to do all of this refitting to her Redditch home in order to "perform her duties as an MP": it's her second fucking home. If she is entertaining, she should be doing it at her "primary" residence, i.e. her sister's South London flat.)

Still, as Guido points out, the rules are pretty fucking lax and need an overhaul. Except that they have had an overhaul and the new rules, laid out in the Green Book, kicked in on April 1st.

GREEDY MPs have secretly granted themselves the right to milk Britain's taxpayers for yet MORE dodgy expenses.

Parliament's Green Book bible of the hefty cash allowances they can claim has just had a hush-hush rewrite.

But instead of closing up loopholes and clamping down on excesses they have simply SCRAPPED the strict rules that have tripped MPs up, sparking the recent wave of scandals.

And this shameless move comes only a week after Jobs Minister Tony McNulty was exposed for claiming £60,000 in second home expenses for using his parents' house-just a few miles from his own London family home.

In future MPs won't have to worry about meeting stringent criteria on what they can claim back from the public purse.

Instead they THEMSELVES will decide if their demands are fair and justified-despite being PROVED again and again that they can't be trusted to.

These cunts hold us all in contempt, when they should be hanging their heads in shame. As such, it will have to be us that do the fucking hanging.

I have said it again and again: is it so much to ask that those who seek to rule us, and track our every movement, are not corrupt?

Unfortunately, as Longrider has found out, it seems that some members of the general public feel that fiddling their expenses is absolutely fine.

The problem is not immoral, avaricious politicians, who are subject to incentives, just like us, but the rules which allow them to claim that their sister's spare room is a primary home, thereby claiming the second homes allowance for their first home. I would certainly make the same call, were I allowed to. And so would you. Yes. You would.

No, I wouldn't—as I have told you before, in fact, Jackart. I do not claim fraudulent expenses and I never have done: I am absolutely scrupulous in not claiming a packet of cigarettes on my petrol, for instance. Because, you see, that would be to defraud my employer.

Not only that: it would be a betrayal of trust. And that is why the politicians' expenses claims are important—because they show that these cunts absolutely cannot be fucking trusted.

And if they cannot be trusted to defraud the taxpayer, then they cannot be trusted with anything else. Yes, Jackart, you are right in that we loathe them for many other things too, but I do hate them for claiming these expenses—I hate them because every month they steal £600 of my money—the product of my hard work, accumulated knowledge and, yes, my talent—and use it to buy, fraudulently, fripperies of the sort that I must pay for out of what money they let me keep.

As I have said: fuck the rules—this is fraud, larceny on a grand scale. They are using the money to pay for things that were, I'll bet, never meant to be included in such claims.

Not only that, they provide themselves with an exemption from the taxes that we, in the same situation, would have to pay.

And if you think that I would do the very same thing given the same opportunities, Jackart, then you haven't been fucking listening: I would not. And why? Because, you see, I am honest.

It is really the only reason that I would wish to be elected to that cesspit of sleaze, corruption and dishonour—in order to show that you could be an honest MP, to demonstrate that you can represent the people and not simultaneously defraud them.

You? You'd presumably be diving into that trough with alacrity. But then, I guess that's why I am a libertarian and why you are a member of the Tories—you are quite willing to compromise your beliefs.

And you might say that you will be in power and I never shall be: maybe so, but I will retain my integrity whilst you are trotters deep in your own filth.
By Devil's Kitchen at April 05, 2009

over on Guido some posters have landed on a civil disobediance ruse that sounds good. Everyone embeds a few key words in emails (words like Jihad, Terror, Bomb ) best plan would be in the signature block - format as white text so they are not seen.

Bingo - massively overload the snooping bastards !! (well I thought it was funny!)

I'm a self-employed IT contractor, and if I were to try to claim home decor expenses (or more accurately, set them against tax), those nice people at HMRC would be down on me like a ton of bricks.

This is outright fraud on Jacqui Smith's part. It is utterly disgusting.

I came up with an idea which I suggested on Obo's blog - just list the Home Office keywords at the side of your blog in a text box. Then people visiting your site will be have to be traced too.
Unless you send loads of emails then putting stuff like 'jihad', 'suicide bomber' and 'infidel' would be 'hit' more often on a blog site.

PS - When did Jacqui Smith have time to do all that those whopping shops for home furnishings? She's supposed to be the Home Secretary ... It's quite a big job.

So which constituency will you stand in? I need a running mate in North London

To be honest I'd gladly pay to keep all the politicians in 5* accomodation if they'd get their hands off the hundreds of BILLIONS they rob off us.

some members of the general public feel that fiddling their expenses is absolutely fine.

No, but tax avoidance is perfectly acceptable. Now of course in the case of expenses anything goes, so its up to the MP himself to draw the line. And if it were me I would draw the line as far away as possible.

Look, you don't get it. Humans are inherently greedy. I'm not defending it but if your employer allowed you to claim your ciggies then wouldn't you? My bank took £2 of interest away from me as tax this year. I'm going to claim it because I can.

I'm sure many MPs start the job hoping to "prove" that they can do it and be honest. They then realise that 1) nobody cares about you if you're honest, and 2) when everyone else is doing it, just don't be the worst and nobody will notice you either!

I once had a "write your own" expenses deal with a Government Department - in other words I could tell them what I spent, and they paid it, no questions, no, receipts.

I never once charged them for something that was not absolutely necessary to do the job, and never once "added value" or "quantatively eased" the claims. In other words, I did not take one extra penny from my employers.

Why? Because it would have been dishonest.

A true Libertarian understands why one must have, for want of a better phrase, a private moral code. Clearly these politicians have no such thing.

How can a government minister who fiddles their expenses be party to the prosecution of someone who earns £20 every few days for providing relief cover in the local pub?

She's getting royally jipped off by her cleaner, when we had one they charged a fuck sight less than that. I for one am getting pretty bloody bored of hearing that "I was operating within the rules". Yes, we know you were but the point is that the rules are designed by you lot, for you lot and the rest of the country doesn't think that's right. Venal bastards, the lot of them.

"and why you are a member of the Tories"

Wacky Jacqui is a nu-Labour politician, don't smear the tories in Labour filth.

Harriet Harman said that although the former RBS chief executive's £16.9 million pension pot might be acceptable to a "court of law", it was not acceptable "in the court of public opinion".

Well the same goes for the MP's expense claims. They should pay them back and apologise for their voracity.

While you make many valid points, and I share your outrage at what she has done, your posts would probably be taken a little more seriously if you stated them in a more professional manner.

Either that or stop dropping the cunts and fucks left right and center. Just some advice though.

Just another hate site. Surf on.

Wow i can't claim any of this stuff to do my job wow i've been getting cheated all this time,who's of thouth she didn't just need a room to do her work amazing,

What a thieving bitch,the lot of them are a bunch of crooks they are all a bunch of bankers in power thats what they are this is why they wanted there spendings removed from public view if anything started the stink of a crook it was that