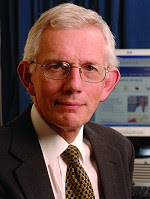 Professor Ian Gilmore: disgusting, illiberal killjoy who's salary is paid for by the government us.

The Express has an "exclusive" interview with Professor Ian Gilmore today; needless to say, this idiot shill has nothing good to say.

DRINKING blackspots will be subjected to prohibition-style laws under a radical proposal by the country’s top liver doctor.

Oh yes, that'll work. Because, you know, whenever I want to cite an example of a law that worked really, really well at achieving its primary objective and had no unintended consequences whatsoever, the American Prohibition is most definitely the one that I go for.

The aim is to block alcohol sales in parts of the country where people’s health is being put at risk by drink.

The plan was put forward by Professor Ian Gilmore and it could see many inner city areas being turned into drink-free zones.

In an exclusive interview with the Sunday Express, Prof Gilmore said: “Much of the focus of drink has been on its link with antisocial behaviour, crime and disorder but our concern is about the damaging consequences of drink to health.

“When I became a liver specialist 30 years ago, alcoholic liver disease was something we only saw in middle-aged and older people. Now we’re seeing people in their twenties with end-stage liver disease.

“We need to use all the tools we’ve got to try to tackle this problem.”

Prof Gilmore wants the law changed so councils could refuse a drink licence on health grounds.

Professor Gilmore should shut his fucking hole, as far as I am concerned. Other people's health is none of your fucking concern, you cunt.

What is, of course, not mentioned in the entire article is that Professor Ian Gilmore has form. He has featured on The Kitchen a couple of times, peddling his usual brand of puritanism.

Professor Ian Gilmore is not only a member of the RCP but is also "Chair of the Alcohol Health Alliance" (a fact that is significantly absent from today's Beeb story).

Now, a quick search of fakecharities.org for "Alcohol Health Alliance" throws up such definitely fake charities as Sustain, the Institute for Alcohol Studies and the Alliance House Foundation (formerly the UK Alliance for the Suppression of the Traffic in All Intoxicating Liquors); all of these organisations are heavily funded by the state which means, of course, that the Alcohol Health Alliance is also heavily funded by the state.

As such, Professor Ian Gilmore is a mouthpiece for the government and should probably have his tongue ripped from his lying head before being hanged by his testicles in a tank full of ravenous piranas. The cunt.

Why don't these people just fuck off?

I commend this motion to the House, and also invite any doctors who would like to disassociate themselves from this evil little man to do so in the comments. If, as a bonus, they would like to start proceedings to get this disgusting authoritarian thrown out of the Royal College of Physicians (RCP), then that would be absolutely hilarious.

In the meantime, this hideous bastard is trying to ruin our pleasures and rule our lives (for our own good, of course).

I'll provide the piranhas if I'm allowed the filming rights.

Alcohol zones! Just like congestion charge, but for booze! They’ve won the smoking war, and now its booze, anyone who wants a tipple will soon be demonised as a non-green, child molesting monster and a terrorist thread. Get that in too, no need to explain why. Some expert said so apparently.

So I understand parks and public places are already alcohol free. When did that come in? Now that the weather’s improving, any chance of a picnic in the park, a few pies and a cold beer – or wine maybe? Fat chance! You’d almost think there was a conspiracy to force people to buy overpriced lager in pubs where 4 times the profit goes as tax (according to witherspoons).

I wonder if it’s still legal to brew your own beer?

I think that guy looks like the FA cup.
No sorry Dumbo !
An uglier version of a Ferengi alien from star trek.
Sorry but these comment are intended to offend.