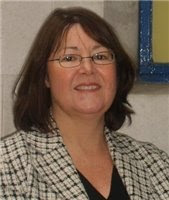 Professor Allyson MacVean: definitely a lovely person and now part of the University of Cumbria’s newly created Institute of Policing and Criminal Justice.

A few days ago, your humble Devil was notified that someone was trying to get contact details in order to sue him. I was, I admit, mildly concerned and waited the email with some trepidation.

It was from one Allyson MacVean, complaining that I had defamed her in a post last year.

I understand you are responsible for the Devils Kitchen web page.

On those pages are material relating to myself which is defamatory. I
would ask you to remove it otherwise I will seek legal redress and
compensation

The name didn't ring a bell, but I managed to track down the post; it related to a BBC article in which Ms MacVean is quoted thusly...

Prof Allyson MacVean, director of the John Grieve Centre for Policing and Community Safety at London's Metropolitan University, welcomed the move but said police should be able to search sex offenders' homes and computers.

"Internet addresses are so easy to make up and it doesn't give any sense of who the person is or where their location is," she told the BBC, "which is why the police do need to have access to their computers without them needing to go and apply for a warrant."

I unkindly called Professor MacVean a number of decidedly naughty names, because I determined that anyone who would call for the police to be able to break into someone's house and access their computer—on the basis of no evidence whatsoever—was, in fact, a very dangerous and unpleasant person.

However, I see that the BBC news story has now been amended and reads as follows:

Prof Allyson MacVean, director of the John Grieve Centre for Policing and Community Safety at London's Metropolitan University, said police should be able to search sex offenders' homes and computers.

"Internet addresses are so easy to make up and it doesn't give any sense of who the person is or where their location is," she told the BBC.

She said this was why the police needed access to sex offenders' computers without needing to apply for a warrant.

So, did Professor MacVean say this or not? One has to wonder...

Anyway, despite receiving legal advice to the effect that Professor MacVean had little chance of securing a judgement against your humble Devil, I decided to amend the post.

And I would like to thank Professor MacVean, because I believe that the substituted text is actually rather more powerful than the insults that I threw at her. Said text now reads as follows:

I genuinely think that anyone who wants the police to be able to break into an innocent person's home without having to present prima facie evidence before a judge is, in fact, directly encouraging a police state. After all, if the police are able to bypass the law at any time, this is, surely, almost the very definition of a police state.

And this authoritarian measure is, it seems, what Allyson MacVean is lobbying for (unless, of course, she has been misquoted?). Needless to say, your humble Devil views anyone who advocates that a police force should be able to invade a person's home and lock said person up—without having to produce a shred of evidence of wrong-doing—to be deeply illiberal.

Yes, yes: we all know that it will only be for paedos, but picking out minorities and persecuting them is what totalitarian states are so very good at—just ask the Jews, gays and cripples of Nazi Germany (or Stalinist Russia, for that matter).

I am happy to clarify Professor MacVean's position on this matter.

Thank you for your attention.
By Devil's Kitchen at February 12, 2009

Fuckin marvelous that someone prefers to be called an illiberal, totalitarian to the spicy things you probably labelled her with before.

Goes to show that totalitarianism is perfectly acceptable in this day and age.

Aren't you protected by free speech laws? Not being sarky: genuinely curious.

I cannot imagine why you are being so kind to this grim old harridan.

Which free speech laws? The HRA is only advisory.

The original quote is still there in the Google cache.

"Internet addresses are so easy to make up and it doesn't give any sense of who the person is or where their location is," she told the BBC, "which is why the police do need to have access to their computers without them needing to go and apply for a warrant."

So, someone could make up her "internet address" and use it to access paedophile sites. Then the police would be able to search her computer without a warrant.

If she is unable to see this, she is not fit to be a university professor, never mind that her email to you shows her command of the English language is somewhat rudimentary.

We don't have free speech laws in the UK, we have libel laws which means that illiberal fuckknuckles with their heads in their arses (naming no names, natch) can threaten bloggers with being sued and force them to change what they say.

Heh. Word verification - "vadjacto". Yep, that pretty much sums up my feelings.

Okay, this isn't exactly a libertarian idea but ...

Given that restrictions on use of computers are certainly part of US parole systems and the UK govt detention without trial home arrest schemes and, apart from those unfortunates convinced to cop to a caution, people on the Sex Offenders' Register have been convicted (I know very little about UK parole restrictions). Why don't HMG set up an(other) ISP - I used the CCTA as mine for years and it was much more competent than my subsequent BT Internet connection? Then, those offenders whose conviction justifies it can be allowed access to the internet but only through this ISP. Hell, clag it on to DII(F) if you have to - the web access policy wouldn't be any more restrictive. Then, regardless of the email or chat address used, the Govt has your IP address and, if there is evidence of wrongdoing, can exctract the appropriate logs.

No invasion of your computer needed.

It is incongruous that a teacher, or more recently a school receptionist, can be suspended and threatened with dismissal from their job for using the Jesus word. But someone who advocates the destruction of freedom and fair rule of law is left totally untouched. Which of these people is the worst? I know, but does anyone else?

Just refer the bitch to the answer given in the Case of Arkell vs. Pressdram.

"Internet addresses are so easy to make up and it doesn't give any sense of who the person is or where their location is."

I notice that the nasty little cheerleader for Team Creedy has very little trouble tracking down our Devils RL persona though. Lies, damned lies, and the words of quangocratic pseudo-academics.

God bless archive.org; sticking it to the revisionists since 1996.

I may have missed something so if I have I shall apologise for taking people's time:

The Devils Kitchen quote talks about the Professor proposing this for innocent people whereas I think she is talking about people already on the sex offenbder's register. The quote from the BBC is, however, oddly phrased.

If this is the case then perhaps the Professor has some justification for complaining about it being said of her that she wants the police to go after innocent people without a warrant.

The complainant should have had the decency to mention if she had made the BBC clarify her views and asked for that to be the basis for a reconsideration by the DK. Nasty piece of work she is.

Surreptitious Evil: No, we should not permit the wedge in our law that allows it to censor content because they are "bad people". That rule can then be easily extended to cover political dissidents, children, voters.

We have ridiculously strict libel laws. these need amending as they can be an affront to free speech. but you cannot be sued for an opinion even if it is derogatory, rude or just plain insulting.

How many other stories do the BBC change retrospectively? What else gets thrown down the memory hole? Surely they should be under some obligation to leave the original online somewhere, or at least make it clear that the story has been "amended"?

Oh FFS! It's clear from both extracts that she's referring to sex offenders. Stop getting your knickers in a twist. This is and was a non-story.

"Oh FFS! It's clear from both extracts that she's referring to sex offenders. Stop getting your knickers in a twist. This is and was a non-story."

So what you are saying, Mike, is that even after they have served their sentence, sex offenders have no rights?

Or even if they have not actually been convicted of anything, and there is no actual evidence of them having done anything wrong, people who the police think might be sex offenders (even though the police do not have enough evidence to get a warrant from a judge) also have no rights?

I was threatened with a defamation lawsuit in a case like this once. Fortunately, the offended person had no case. Personally I think his accusation that the city where I was born is one of the most "racist" in England I take as a defamation against my character.

Tou-fucking-che Professor. I believe you have just been had.

It's people like this who keep our darling Jacqui Smith in houses that may-or-may-not be their primary residence...

Why does Cumbria, a largely rural county with few towns of any size need a poxy "Institute of Policing and Criminal Justice" anyway.How much tax money is being urinated away on keeping this corpulant female jobsworth solvent?. This country needs an "Anti-police Institute" to come up with plans to keep the jumped up, useless thugs of ZaNuLab's Marxist militia in their place which is not struting around the streets in their monkey suits glowering at ordinary people.

You complete and utter arse licking coward. Fuck me, I'd feel totally humiliated if I'd rolled over and said 'tickle my tummy' with the indecent haste you've just shown. Why bother pimping it up as 'oh gosh I made a mistake' - why not just admit you crapped your cacks and demonstrated why, for all the mouth and bravado, you are just an unprincipled chicken at heart.

So much for fucking high minded principles. Next time, perhaps think before you open your mouth and you may just manage to avoid completely humiliating yourself.

Disgusting post by 'So sue me' aka Allyson MacVean