So called because I really cannot be bothered to go into all of the figures today, for Polly Toynbee is getting her knickers in a twist about the Taxpayers' Alliance—apart from anything else, I am sure that the TPA are more than capable of answering Polly's accusations.

However, it's always worth pointing out our Pol's little foibles...

Drip, drip, drip. Day after day an insidious poison is fed into the nation's veins, spreading anger and cynicism about everything in the public sector. Nothing works, billions are wasted, public servants of every kind are pointless jobsworths feathering their nests and twiddling their thumbs.

Seriously, Pol, billions are wasted. Very little works well. And there are 646 "pointless jobsworths feathering their nests" in the Commons, just for starters.

With a full-time staff of 10, [the TPA] digs and delves to produce "facts" and "figures" designed to undermine trust in everything in the public sector.

Fuck me: for someone like Toynbee to put quotemarks around the words "facts" and "figures" is just hilarious—one only needs to browse the archives of the sadly defunct Factchecking Pollyanna to see why.

Next up, Polly lays into the TPA reports that purported to show that the public sector median pay was higher than that in the private sector.

[...] The private sector now has most of the unskilled work: most cleaners, carers, caterers, security guards, dinner ladies, porters and labourers. They once worked in the public sector, but are now outsourced—and so there are now five times more "elementary" jobs in the private sector.

And yet NuLabour has still managed to grow the public sector by about 500,000 in ten years: that's pretty fucking good going, eh?

But there must be a good reason for this, right?

Quite right too, since the minimum wage is below what a family can live on.

Really? And so what, Pol?

Please note Polly's sleight of hand here, and it's one that she always employs: she always assumes that someone on the minimum wage is having to support "a family". As far as Polly is concerned, single people without sprogs who don't earn above the minimum wage don't actually exist.

My first job, way back in 1997, paid me just over £12,000 (a little higher than the minimum wage, but not for long). It wasn't a fortune, but I was hardly destitute. I was, however, aware that I couldn't afford to have a family—even were I able to find someone stupid enough to bear my spawn. It's called "living within your means", Polly.

What's more, the taxpayer probably loses little since that extra for the lowest paid will be deducted from their tax credit entitlements.

I find it absolutely hilarious that Polly should be accusing the TPA of twisting the facts; especially since Polly, with all of her journalistic resources, apparently cannot be bothered to do some simple calculations...

(I should point out that you can considerably boost the income by assuming, say, a non-working partner and a small child, but my point about living within your means still stands. As such, I have calculated the below with all of my details, excepting my real salary.)

Now, using this handy calculator, we can see that the tax credits to which they are entitled (assuming no dependents) is precisely fuck all. So, gross income remains at £13,790.40 per annum.

Now, I am not making a moral judgement one way or the other about the salary, but the simple fact is, Polly, that if you are going to write an article about how people manipulate figures, then you had probably better do some research.

Next, she's decided to bang on about pensions...

True, the private sector is closing pensions—and the divide between the two will grow. But the answer is to beef up private pensions, as Labour's new system is attempting to do.

Riiiiight. So, Gordon's pension fund raid (waits for John B's rapid intervention) through ACT has not damaged private pensions in any way then? It has. Basically, Gordo has smashed a vase, and is now trying to glue it back together again. The twat.

Oh, and now she's on to local government non-jobs...

The TPA made much fun of Moray Council's advertisement for a "street football coordinator" (salary £19,887), expostulating: "This is unbelievable ... All you need is a few jumpers for goalposts and a ball."

The Sunday Herald investigated and hit back. The paper discovered that the real salary was half that, as it was part-time—and the council only paid £3,000 of it, with the police, fire brigade and local businesses paying the rest.

Polly then points out that the job had a good impact. Great: I'm very happy. But that isn't really the point is it, Pol? You are supposed to be... [snigger]... attacking the TPA's figures, no?

Does public money get wasted? Of course it does, from failed IT schemes, to wasteful ID cards to ever-escalating Olympic costs. When £500bn is spent a year...

... some schemes will fail, and some managers will empire-build. Eternal vigilance is needed.

Which is rather the role that the TPA fills, is it not, Pol? You know, scrutinising those apparent non-jobs? Bringing wastage into the public eye—you know, informing the public of how their money is spent and (quite possibly) wasted?

Or do the TPA behave too much like "rottweilers" for your taste, Pol, and not enough like outreach co-ordinators?

But at least the spending is pretty transparent, audited and scrutinised, whereas very little can be gleaned from public companies' minimal accounts on their wastages.

Who gives a crap, Polly? "Public companies" do not take money from me under pain of fines and imprisonment: can you not see the basic fucking difference, you idiot?

And if the depredations of the TPA ensure that public servants scrutinise the accounts even more carefully, then surely that is a good thing? After all, Polly, they are spending the tax money of rich and poor alike and, I think, rich and poor alike have the right to know where their £600 billion goes, don't you?

One thing we do know: the TPA is selective with its figures.

It has also refused to attack the tax avoidance the Guardian's Tax Gap investigation has revealed, which defrauds us all. 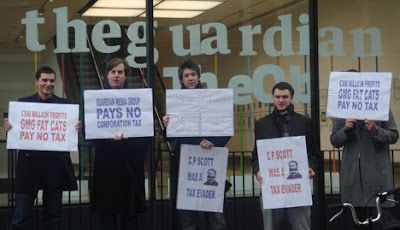 You do know that despite making a £304 million profit last year, the Guardian Media Group paid not one penny in corporation tax, right? In fact, you do know that GMG actually engineered the accounts to ensure that it got an £800,000 rebate, yes?

How many unskilled public sector workers would that little chunk pay for, Pol?
By Devil's Kitchen at February 10, 2009

Nicely done, and with great restraint.

Do you know if the barking apologista reads your blog, or does one of her underlings review the blogosphere like a poress cuttings service?

If not, should one be kind enoughto print it out and forward it to her?

Her curiously unchronological bio is here:

So...is she just very, very bad at things with numbers in them, or at all discussions involving 'facts' and 'figures?'

BTW, cleaners in my depressed, provincial neck-of-the woods get about a pound and hour above minimum wage after about the six months it takes their employers to realize they aren't going to get pregnant straight away and oblige them to recruit and start trusting someone new. I know this because I get to see their wage slips.

Plus tax credits, child benefit, help with rent and council tax...ah, Poly[she went to Oxford!] they're getting what they want on the welfare state and you're still not happy!

Polly really is a nasty piece of work. I cannot think of one single redeeming factor about her. Sanctimonious shitpiece just like her father. Polly will, I believe, go down in history as an exemplar of the champagne socialist whose living depended on keeping the working class ill educated and in "relative poverty" She is scum.

Polly is a stranger to reason. Problem is there are plenty of nodding dogs around her to keep up the pretence.

Leave it, Devil, she's not wurf it.

"And yet NuLabour has still managed to grow the public sector by about 500,000 in ten years: that's pretty fucking good going, eh?"

Let's get our facts straight. The number of taxpayer funded jobs has increased by TWO MILLION since 1997 (of which maybe a tenth are actual nurses, teachers, coppers - as rubbish as they may be), and there were probably a million or so too many quangista when the Tories got chucked out.

Please note Polly's sleight of hand here, and it's one that she always employs: she always assumes that someone on the minimum wage is having to support "a family". As far as Polly is concerned, single people without sprogs who don't earn above the minimum wage don't actually exist.

This is the same human shield Chancellor Brown has hidden behind for a decade.

'Light' fisking, eh? Cor. Let me know when you're in the mood for a heavy fisking of the Left's most bitter, sanctimonious and strangely incompetent liar.

wv funcess. Must be short for something but I can't think what for the moment.

Bit like shooting fish in a barrel this one, devil.

I’d like to see you vent your spleen a bit more, but the delightful Polly is just too easy a target, i guess.

Is it possible that she genuinely doesn't understand the difference between the private sector and the so-called public sector?

"Drip, drip, drip. Day after day an insidious poison is fed into the nation's veins, spreading anger and cynicism about everything in the public sector."

This is the most beautiful thing Polly has ever written, it makes so much fall into place. She thinks truth is an insidious poison.

She's a 'Common Purpose' graduate - what else do you expect from those treasonous 2@s?

She's a horror show. Wealthy and priviliged and the Lord Haw Haw of the Labour Party. Yuk...

Oscar Wilde once said "It is better to remain silent and be thought a fool than to speak out and remove all doubt", advice that Polly should possibly heed because every time she opens her pointless, self-indulgent trap more crap falls out of it and onto the page. I sometimes wonder if she actually believes the tripe she scribbles or if she's being ironic. Then I remember that she and her ilk don't have a sense of humour and I marvel again at the fact that people who have gone all the way through the education system can't see bullshit when it comes up and hoofs them in the jacksy.

actual nurses...as rubbish as they may be

Do my job, would you?

I suspect it would make you piss yourself with fear.

Made me nostalgic for Fisking's salad days.

Can you believe those waste of space, backscratching troughers in the Welsh Arsembly? There's an economic tsunami going on all around them and they're busy discussing people being charged for plastic carrier bags. Out of touch or what? Unbelieveable!!!

you know, since i found your blog i don't even need to bother to read the tedious old hag's latest claptrap. you save me a lot of time and you make it entertaining too!

I'm surprised at you as a Libertarian and Free Marketeer.

Polly has a product she sells which is obviously crap, like homeopathy or the secret of eternal youth. She obviously doesn't believe it but she does rather nicely out of it.

No one with a blind bit of sense takes it seriously, apart from those making money out of it.

When the chips are down, it won't be the Rightists and Libertarians who shove her up against a wall and offer a last fag, it will be the idiots who bought the shit she peddles.