What the living fuck? 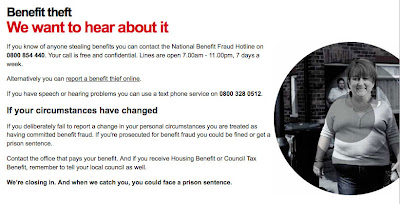 Via Guido, I see that Jacqui Smith—surprise, surprise—has been defrauding the taxpayer to the tune of some £116,000, as reported by the Mail on Sunday.

Home Secretary Jacqui Smith has claimed more than £116,000 in Commons expenses for a 'second home' while effectively lodging with her sister.

Ms Smith claims the maximum parliamentary second-home allowance, currently a tax-free £24,006 a year, on the detached house in her West Midlands constituency, where her husband and two young children live and which she bought for £300,000 five years ago.

She is able to do so because she has told the Commons authorities that her 'main home' is a house in London owned solely by her sister, Sara, where she stays on some weekdays.

Nor is this the only large expense caused by the Home Secretary's decision to share her sister's house.

Two policemen provide a round-the-clock guard at the South London property, costing taxpayers an estimated £200,000 a year. The two officers are stationed at the property on a shift basis.

There would have been no need for such protection had Ms Smith opted to live in one of two vacant grace-and-favour ministerial homes in Whitehall when she became Home Secretary in 2007 as they already have police protection.

But such a move would have affected Ms Smith's personal finances: Ministers who live in such properties are not allowed to claim the Commons second-home allowance.

Not only is this woman a disgustingly illiberal scumbag who is keenly pressing ahead to tag and track us like a herd of fucking livestock©, but she has been quite clearly defrauding the taxpayer to the tune of £24,000 a year.

Lest you need reminding, the median wage in Britain is about £24,000—except that we have to pay over £5,500 tax and NICs on that. These venal fuckers who claim to rule us have an exemption with HMRC so that MPs—such as this hideous, fat tart—don't have to pay any tax on their expenses.

Prosecute this fraud: prosecute her now.

And if when she is found guilty, flog her through the streets of London and let everyone else through rotten fruit, shit and rocks at the fucking corrupt whorebag.

They are all at it: all of them—MPs, Lords, and the rest. The money that they steal so blithely represents the hard work of the productive members of this country. It is our money that they are stealing.

Let us go through the whole of Parliament, and prosecute anyone who has stolen our money...

UPDATE: it is worth pointing out that our fucking corrupt Home Secretary is practised in the art of deception, encouraging (I assume) her husband to write to the newspapers praising her fat, useless arse whilst failing to declare the financial and uxorial relationship that he has with the subject of his letters.
By Devil's Kitchen at February 09, 2009

Shouldn't her ministerial salary be enough to cover the cost of living in two places?

Doesn't she employ her husband as well? Why the hell aren't jobs for MPs open to all? Where else (well, Zimbabwe, I suppose)can MPs employ members of their family? It doesn't matter if the family member can do the job or not, a public representative just shouldn't do that kind of thing.

I agree with anonymous, 03:02:00 PM. I think we need some healthy vigilante participation throughout the country. Lynching of most of the government would be so pleasurable, it would lift the spirits of the nation in these depressing days. And once they are gone, their pollution of the body politic is also gone forever.

I notice the Guardian profile on Jacqui Smith on 19 September... is headed by the glowing headline:

I've written a few personal references like that myself. Rather scraping at the bottom of the barrel with that one though...

....and doesn't the Home Secretary get a 'grace and favour' pad in London courtesy of the tax payer? Or is Blunkett still using it as a shag pad?

Its no good shooting the messenger.
Ms Smith is just finessing the system showing a little more initiative than your average 'snout in the trougher' MP.

Most of them are at it. Being an MP and Minister is seen as an opportunity to become financially secure for life. The mindset on entering Westminster changes.

We need a latter day Savonarola.

No she's not she's a Labour MP

I was originally impressed and surpeided by her diligence at maxing out her allowances, but have since changed my mind.

"...who is keenly pressing ahead to tag and track us like a herd of fucking livestock..."
Tagging yes, but it doesn't look like they actually have a plan to track us, http://www.theregister.co.uk/2009/02/07/ips_card_readers/
They have no way to read the ID cards

She pays her husband £40K per year to write letters praising her to the local papers.

Ah do b'lieve that the good old US Senators and Congresspersons have to pay for their own Washington accommodation out of their salaries.

Why moan about bankers bonuses when these bastards get a shed load of tax free expenses. At least these bonuses attract income tax.

You will have noticed that the Tories are a bit quiet. D'you think they might be fiddling stuff too? Heavens to Murgatroyd!

"They have no way to read the ID cards"

I beg to differ.
The bit at the bottom of the card with the chevrons is an MRZ (machine readable zone) The equipment is in place already to read this.