The Troubles with cunts... 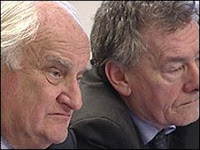 Lord Eames and Denis Bradley: evil writ large on human faces. There's no portrait in their attics, the cunts.

As unpleasant and shitty though our government are, there are still organisations that fill me with even more disgust. The sinisterly-named Consultative Group on the Past (why not just go the whole hog and call them The Truth And Reconciliation Commission, eh?) have just booked themselves a place on my list of Truly Unpleasant Piece-of-Shit Groups, with this announcement.

The government is to be asked to pay £12,000 to the families of all those killed during the Troubles - including members of paramilitary groups.

The families of paramilitary victims, members of the security forces and civilians who were killed will all be entitled to the same amount.

The payment is expected to be recommended by the group set up to advise on how to deal with the past.

The Consultative Group on the Past is to publish its report next week.

If the recommendation is accepted by the government, the cost would be an estimated £40m.

The group, co-chaired by Lord Eames and Denis Bradley, is expected to say there should be no hierarchy of victims and that everyone should be treated in the same way.

That would mean the family of the IRA Shankill bomber Thomas Begley would receive the same for his death as those of the families of the nine civilians he killed.

Likewise, the families of two UVF members killed while they planted a bomb that also killed three members of the Miami Showband in 1975 will be entitled to the same payment as those of the victims.

You fucking what? Fuck you, Lord Eames, and fuck you too, Denis Bradley. Why the fuck should the families of terrorists get any of my fucking money? I could rant forever about this, but I shall hand you over to the eloquent stylings of the poor, little Greek boy instead...

The most obvious question, of course, is why the hell I should have to pay a brass farthing in compensation for the death of a terrorist. My concern about the growing encroachment of civil liberties, and my opposition to torture, is by now familiar (I hope) to anyone who comes back to this blog a few times; but let it be stated for the record that I carry absolutely no fucking guilt, regret or remorse over the gunning down over the years of all those shaven-headed knuckle-draggers from the UVF, IRA or any of the other acronym-happy arseholes who brought misery to that place for so long.

I'm all for "moving on", but we should never allow ourselves to forget that, with zero due respect whatsoever to Lord Eames and Denis Bradley, there is certainly a "hierarchy of victims" of the Troubles, and the thugs who targeted innocent civilians belong right at the fucking bottom of it. Let them all fester in unmarked graves, every last bigoted one of them.

Quite. Now, perhaps the Consultation on the Real Past (or whatever the fuck they are called) would like to recommend that the families of the Muslim 7/7 bombers should get precisely the same compensation as those of their 50-odd victims? Come on Eames and Bradley: why don't you come to London and propose that measure, you hideous fucking cunts?

Let me spell out a little message for the families of terrorists killed in the Troubles: your men were murdering gangsters, terrorists who thought nothing of drilling holes in people's kneecaps and shooting or exploding innocent people. They were scum and, if you yourselves had any honour, you would have expunged their names from your family trees.

Nor should their actions be in any way justified by the fact that stupid, evil fucking Americans helped to fund your relatives' murderous exploits (I wonder how many continued to do so after 9/11?); but, as my impecunious Athenian friend points out,

... if they're so committed to peace and reconciliation, why not get Sinn Fein to have a whip-round in the dingy republican bars of Boston to compensate the daughters of Erin for all the sons who never came home?

Quite. They shouldn't get a fucking penny of my cash: if the families of these scum want compensation, then I suggest that they turn to those who encouraged their husbands and sons in this murder—the guilty Americans and the fucking Republic of Ireland government.

I simply don't think I can take any more. Each day one more vomit inducing idea seems to spring from the bowels of fools. If ever there was an inducement to take yourself off the voters register, stop paying tax and disappear its utter bollocks like this. My money is being wasted daily on shite.

Some of your sentiment is alright, but in all fairness, Lord Eames and Denis Bradley are good men trying their best. Yes this particular proposal is abhorrant, but the men themselves (Eames and Bradley, for clarity) are not bad people.

More candidates jostling forthe front of the queue for the Hugh Despencer treatment come the day of reckoning.

If Eames and Bradley are such noble fellows, why are they having anything to do with this?

I'm getting to the point now were I've have had more than enough of this bullshit form these fucking do-gooders. I feel like tracking them down and shoving their fucking faces in the shit that they just can't stop coming out with, it's none fucking stop diarrhoea.

Sorry, to change the subject but have you all seen Raedwald today?

This is seriously NOT OK!

This "Lord" Eames wouldn't be a former Archbishop would he?
Yet another reason for the separation of church and state!
Over here, even the Kennedys and the Irishtocracy wouldn't suggest pensions for the IRA from government funds; shameless and stupid though the "professional Irish" are, they have some sense of reality.

The sheer hellishness of our situation.

This DOESN'T surprise me in the slightest - these useless losers have been running this country into the ground since they were elected (anyone remember the £60 million Royal Yacht replacement argument - "It would detract from the health service". Just noise in the accounting now.)

The worst thing is that these evil and devious people are now at the helm for ANOTHER year +. Since they have been elected, every time that they have issued a new initialtive I have thought that this country they could get no lower. I used to get shocked and surprised the next week when I realised that the floor recoiled in horror at their attempts at limbo-danceing us into the ground on the spurious excuse that they had a "democratic" mandate. No longer.

All the alphas will emigrate, there will be a massive brain drain and the unemployment figures will rise. Basically the tail end of every Labour government in history.

Get out while you can.

Many years ago I read a RUSI analysis of the Provisional IRA as a financial administration. The document covered their sources of income, their racketeering, and also the payments they made to their own terrorists. Those on "active service" were paid a salary, with an undertaking that their dependants would receive a pension should they be killed in action. Other supporters, such as drivers, messengers, and folk who hid weapons in their homes, would be paid a retaining fee. The report made it clear that the Provos would never default on these financial obligations.

I would be surprised if the other side weren't doing something similar.

Given that the terrorists families were paid for their terrorism then, and might still be getting paid now, why should they expect additional payments from taxpayers they had sworn to murder?

Eames is a ducking cunt who wants to steal my money

If the dog had the guts, he'd sneak into my house to get it - and you can guess what would happen to him were I around.

I'd incapacitate him using the wand from my vacuum cleaner. I would then use this as a makeshift catheter, giving him Jeyes fluid for Manchester, Cilit Bang for Omagh, and as my Meisterstuck, muriatic acid for Lady Tebbit.

Eames, you pay the fucking money yourself. You are a superstitious wankstain.

So Lords think they can break rules, solicit privilege and generally Lord it over us whilst laughing at us, do they?

The Landed Title of Lord is something we can all have, motherfuckers.

Buy yours today. Then cause chaos. Drag the title of Lord through the mud. Book restaurants and don’t turn up. Book hotels and never arrive. Order shit pizzas using your Lord title. Sign all your letters, cheques and credit cards “Lord Fat Lying Cunt of Tattingstone" and then thoroughly abuse it.

Prizes for the most creative way to make the title of Lord a scourge, a label for dishonesty and villainy.

£29 worth of MISCHIEF. Let US become Lords of the Dance and lead these fuckers a merry one. Trash the title. Make it worse than worthless.

Fuck me, read that Raedwald post. But surely it's a joke? It can't be for real, can it?

Let the fuckers come round and get it then.

Like many former servicemen I have PTSD. The fucking government won't even pay for my treatment. So much for the military covenant.
So we are reliant on charities for help and treatment.

What are you going to do ? shoot them with your Weihrauch pellet gun ?

I think we have all seen ample evidence of your lack of intestinal fortitude recently. Why don't you just shut the fuck up.

Meanwhile, back in the real world, I can't imagine how the 99.99999% of Irish people who want no part of terrorism feel about this.

i'm in Northern Ireland and think this idea is bullshit. paying the relatives of bombers who blew themselves up or who got shot by the army while they were planning to kill civilians is seen as an obscenity. even the irish republicans have expressed revulsion; they think it's British blood-money to buy their silence and an insult after their relatives were killed by State violence as they see it; in fact since this money is tax, and people who don't pay tax are jailed, it's still a continuation of state violence. this scheme is meant well, but Army and police were paid by the taxpayer and knew the risks when they joined up, which is not to make light of their deaths) also the IRA etc knew the risk of death when they carried out illegal deadly operations against civilian targets (or murdering off-duty soldiers on a charity run, who had given their spare time to help northern irish children) this is not to minimise the seriousness of the State taking human lives. but there is a clear line between duty and murder, and the Paramilitary organisations in the North tended to cross it on too regular a basis to have any sympathy with the idea of equating them with their victims' families for the purpose of payment.

"Many years ago I read a RUSI analysis of the Provisional IRA as a financial administration...."

Aha! Was this income taxed? I bet you it wasn't. Each dead terrorist should be subjected to post mortem assessment, and their families visited by Hector the Tax Inspector.

P.S. Own-goalers do not count as victims.

"P.S. Own-goalers do not count as victims."

And neither do the families they left behind, who accepted the payouts from the Provisionals. There is a perception that the families of terrorists were complicit, and these payments support that view.