No, your humble Devil has not started writing for the Pakistan Daily, but it seems that paper has been channelling my spirit. For, via Mark Wadsworth, this must surely be the headline of the year... [Syntactical edits mine] 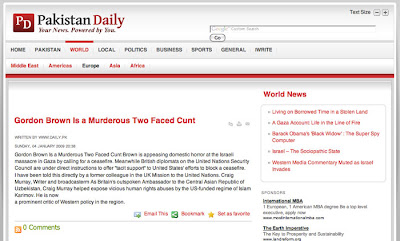 Brown is appeasing domestic horror at the Israeli massacre in Gaza by calling for a ceasefire. Meanwhile British diplomats on the United Nations Security Council are under direct instructions to offer "tacit support" to United States' efforts to block a ceasefire.

I have been told this directly by a former colleague in the UK Mission to the United Nations, Craig Murray, Writer and broadcaster. As Britain's outspoken Ambassador to the Central Asian Republic of Uzbekistan, Craig Murray helped expose vicious human rights abuses by the US-funded regime of Islam Karimov. He is now a prominent critic of Western policy in the region.

If only our media were so honest!

The truth will out.

Headline of the year!

Sometimes you can believe what you read in the paper!

The headline of the year, absolute class.

I laughed so much I think I nearly shat.

I had to double and triple check the paper wasn't a DK wind up.

Excellent. Forwarded to 250 journalists I have in my address book telling them this is how to write a snappy, seo friendly headline.

What's a 'broadcasterm'? Apart from a typo.

Dont agree with the content but love the sentiments; I just wish Gordo would shit or get off the pot about something except electioneering and perhaps grow a pair long enough to hold an opinion of his own.

What did Obo have to Google to stumble across that, I wonder? Probably much the same combination of words that first led me to your 'blog two or three years ago...

I look forward to your full apology

Even if they did scrape Craig Murray, it still made me laugh outrageously loudly.

Thanks for posting DK

A lift from Craig Murray. Wonderful headline. I hope the cabinet do not piss themselves at their next meeting with El Gordo.