[Author's Note: I am not the Devil's Kitchen, despite injecting 17.8% more swearwords into every post since 1st January in an attempt to catch up.]

As the planet's climate grows ever warmer and we are bombarded with more and more scare stories - in the past 24 hours alone, we have had polar bears in the Thames, Emperor penguins dying out by the year 2100, and a warning that it is already too late to reverse climate change before the year 3000, for fuck's sake - we can at least console ourselves with the knowledge that the cosmos seems determined to mock the apostles of this new doomsday cult.

Spare a thought, for example, for Al Gore, whose trip to Washington tomorrow to testify before the Senate Foreign Relations Committee on the "urgent need" to combat global warming (though if it's irreversible, where's the fucking urgency?) is under threat from - yep, you guessed it - a severe winter storm warning in the capital. (h/t to Bishop Hill for that snippet.)

Meanwhile, one resident of Fairbanks, Alaska, Craig Compeau, has grown so weary of waiting for the cold snap to end that he has created a five ton ice sculpture of Gore (which, as Tim Blair rather unkindly notes, is "only slightly heavier than the real thing"). Compeau intends to display the sculpture, in aid of charity, outside a local convenience store throughout February and March or "until it melts". 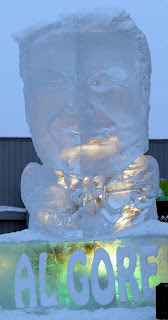 He also issued a challenge to Gore to visit Tetlin Junction in the Alaskan interior, which this month saw record low temperatures of nearly -80F (-62C). If Gore uses an electric car to make the journey, Compeau says, he will even pay for his room and board. You can't say fairer than that, Al, surely? ("An e-mail message from the Fairbanks Daily News-Miner sent to Gore’s official Web site is unreturned as of Monday evening.")

Of course, the beauty of the burgeoning climate change industry is that there are, quite literally, no set of meteorological conditions which cannot be reconciled with their much-vaunted computer models which, as far as I can see, seem to have been programmed by a large room full of coke-addled chimps using the numbers from last week's Thunderball draw. Take last week's shock "new analysis" that Antarctica is, contrary to all previous observations, warming up after all - news faithfully trumpeted by the BBC as the latest nail in the coffin for the "deniers":

The continent of Antarctica is warming up in step with the rest of the world, according to a new analysis.

Scientists say data from satellites and weather stations indicate a warming of about 0.6C over the last 50 years. Writing in the journal Nature, they say the trend is "difficult to explain" without the effect of rising greenhouse gas levels in the atmosphere.

This overturned previous research which seemed to suggest that the continent had been getting colder over the last few decades. The methodology needs close scrutiny, to put it mildly; in the absence of actual surface weather stations recording warmer temperatures, they've used a computer model to predict what such stations would have recorded, had they actually existed.

How exactly this "proves" anything is somewhat beyond this poor little Greek layman; suffice it to say that I'll bet anyone who trusts computer modelling of weather conditions over direct observation gets soaked at least six times a month. I guess it's true, as Arthur C Clarke once put it, that any sufficiently advanced technology is indistinguishable from magic. How else to explain the way this new study plucks data out of thin air?

Not being a climate change scientist, though, I do not presume to second-guess the methodology at work in these studies, the technicalities of which I can barely begin to comprehend. But I do have a perfectly functioning bullshit detector, and it's doing overtime at the moment. For example, it's no surprise to see that our old friend Michael Mann (the creator of the infamous "hockey stick" graph, not the director of, er, "Heat") was triumphant at the news:

"Contrarians have sometime grabbed on to this idea that the entire continent of Antarctica is cooling, so how could we be talking about global warming," said study co-author Michael Mann, director of the Earth System Science Center at Penn State University. "Now we can say: no, it's not true ... It is not bucking the trend."

Which is odd, because as recently as eleven months ago, when the men with white coats and clipboards were still telling us that Antarctica was getting colder, Spencer Weart - Mann's co-blogger at the supposedly authoritative Real Climate Blog - was smoothly insisting that computer models actually predicted - yes, you're on the money again, dear reader - a colder Antarctica:

...we often hear people remarking that parts of Antarctica are getting colder, and indeed the ice pack in the Southern Ocean around Antarctica has actually been getting bigger. Doesn’t this contradict the calculations that greenhouse gases are warming the globe? Not at all, because a cold Antarctica is just what calculations predict... and have predicted for the past quarter century...

Bottom line: A cold Antarctica and Southern Ocean do not contradict our models of global warming. For a long time the models have predicted just that.

How very convenient. As Roger Pielke Jr notes at Prometheus, the blog of the University of Colorado's Center for Science and Technology Policy Research:

Quite. To which I append a second question; has anyone ever worked out how much money is being spunked away on keeping these tens of thousands of scientists, statisticians and polar bear-fuckers in cushy research grants? I'm willing to bet it'd be enough to buy everyone in Bangladesh a rubber dinghy and a pair of swimming trunks, anyway.
By Mr Eugenides at January 27, 2009

So having a colder and a hotter Antarctic both support the theory of man-made global warming?

It's a bit like G. Brown Esq both warning of an impending bust 10 years ago and promising that he had eliminated boom and bust every year since.

I am not entirely convinced either pro or con AGW but it is clear the whole area of research attracts charlatans in their hundreds and my instinct is never to pay for anything until I'm sure I'm going to get it.

Of course both a warming and cooling Antarctica are consistent with Global Warming models, for the models can say anything you want them to, as AGW is a Religion.

I am amazed that people are agonising over what happens to penguins in the year 2100, or the climate in the year 3000 (!!), but couldn't give a shit that the next generation of humans will be crippled by both high taxes (to pay off the credit debauch our country has just finished enjoying) and a moribund economy which will be f_cked by the costs imposed upon it by environmental policies.

"Of course both a warming and cooling Antarctica are consistent with Global Warming models ..."

"Rising temperatures in the west [Antarctic] were partly offset by an autumn cooling in East Antarctica..."

So that proves it! Notwithstanding, how do they know which is the western bit? Surely when you're down there you can only go north, south or round in circles?

"Cooling at places such as the South Pole and an expansion of winter sea ice around Antarctica had masked the overall warming over a continent bigger than the United States where average year-round temperatures are about -50 Celsius (-58.00F).

So it's going to have to warm by 50 deg C before it gets anywhere near melting point, eh?

Mr E talking of cold shoulders have you lent yours to Wendy A to cry on. Has your love waned at all?

Nice post. Mrs Crackers, a bit of a believer in the global warming con, opined that she might have to do some more reading on the subject having read your post.

This graph shows the catastrophic loss of sea ice since 1979.

This one shows the unprecedented rise in global temperatures in the same period.

I would leave her to draw her own conclusions.

I read somewhere that the alpine glaciers are increasing in size, not decreasing as global warming alarmists allege. This, naturally, is still a sign of global warming.

Mrs C has an independent and sometimes contrarian mind so my influence is often counter productive.

"...in the absence of actual surface weather stations recording warmer temperatures, they've used a computer model to predict what such stations would have recorded, had they actually existed."

But there's a string of automated weather stations all the way from McMurdo Sound to the Pole. Dr Susan Solomon (yes, her) used their data as the basis of her 2001 book about Captain Scott: "The Coldest March". It's sitting on the shelf behind me as I type (the book, not Dr Solomon). So what's wrong with using their actual data, rather than the predictions of a computer model?

Interesting, fifty years of satellite and weather station data ... well, since we've only been getting satellite data from 1979 that's just a little dissembling.

But don't the recent claims from the AGW believers have just a whiff of desperation? They'll keep flogging this dead horse and doubtless it'll be up on its hooves and stumbling a few more steps in the summer.

My Dear Admiral, if the data do not support the AGW hypothesis, there is nothing for it but to rely on the models.

Just occurred to me.


Al Gore as a lump of ice; Trotsky. Sorted.

I like the idea of money being spunked away. Sounds fun.

So when can I have my spunking, please?