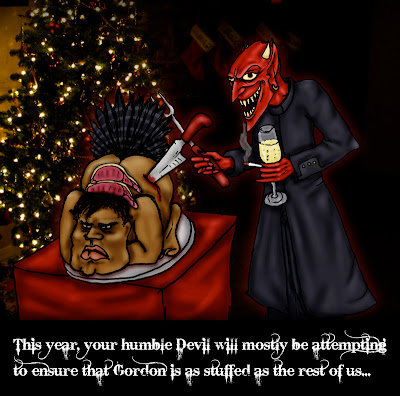 So this is Christmas, as massively pretentious arse John Lennon once sang (badly), and what have we done, eh?*

Good fucking question: it's been yet another year of political ups and downs, with only one thing remaining constant: the mendacity, stupidity, ignorance, venality, corruption, illiberalism and pure fucking uselessness of our elected representatives remains determinedly unabated.

The biggest story of the year, of course, is the endless hand-wringing and cowardly bailing out of the banks that has constituted the so-called Credit Crunch, and it was only this year that we started to realise the full extent of the financial institutions fuck-ups.

As usual, our government has leapt to the rescue in the only way that they know how: by throwing our hard-earned cash at those who least deserve it. Incredibly, altogether too many of the morons that populate this country seem to think that Gordon Brown—the man whose policies (mainly of spending and spending like it's going out of fashion) were largely responsible for the extremely bad position that the UK finds itself in—is now some kind of financial wizard.

I should, at this point, mention the Tories' sensible policies, not to mention the decisive lead that they have taken in these desperate times, but unfortunately I can't. Because they don't really seem to have either.

And I would summarise the LibDems' exciting progress, but I haven't really seen any. In fact, since Clegg took over, I have even less idea what it is that they stand for than I did before.

Of course, the first of January this year saw the launch of the UK Libertarian Party and that has grown steadily over the year. LPUK have not only sorted out a full manifesto but also made waves with the unofficial party blog.

Your humble Devil (plus assorted LPUK officers) has also spoken at Oxford, Farnborough, Cambridge (twice) and at a Libertarian Alliance dinner, all of which have, in general, been well received; further engagements are being lined up for next year, with your humble Devil's first being in Brussels at the end of January.

We have yet to trouble the MSM or the ballot box (although, in the latter case, our inexperience stymied the efforts that we have so far made) but we hope that new strategies, being adopted next year, yield fruit in both departments.

(Your humble Devil remains reasonably certain that he himself is unlikely to stand for office just yet; my stock reply to those who ask is usually along the lines of "but if I actually got elected, I would have to despise myself." Still, never say never...)

The biggest news on the personal front, of course, is my new job, which has occupied more and more of my time since I started there in April. This is likely to continue until the new web software that I am working on is launched (there's some time to go yet) and probably after, as I start to push the development of the other ideas that have been brewing in my head for the last few years.

Suffice to say that I love what I'm doing (in general), and I hope to be able to reveal more to you all at some point in the first half of the new year. It's going to be pretty amazing, I think, and I and my colleagues are incredibly excited about the direction that we're moving in.

Here at The Kitchen, despite posting being somewhat sporadic of late, the readership continues to grow (some 45%–55% up on this time last year); this blog turns four on the 13th January 2009 and verious writers will certainly have added to the 4,646 posts that currently adorn this blog. But for helping to keep The Kitchen fitter and healthier than its founder, I remain immensely grateful to the contributors, commenters and readers. Please, raise a glass to yourselves!

It only remains for me to wish you all a very merry Christmas and—yes, I shall wish you this, for it looks like we are going to need all the wishing we can get—a happy and prosperous new year.

* In your humble Devil's case, what I have done is the world's worst caricature of Gordon Brown. However, I am sure that you all appreciate the sentiment. Now, does anyone want a slice? It's mostly fat, piss and wind, unfortunately, but it's the thought that counts...
By Devil's Kitchen at December 25, 2008

Merry Christmas to you, too, DK. You've made at least one convert, here. You may not have been alone - I like to read OH and Obnoxio's rants, too - but you were instrumental in convincing me to support LPUK. I'll be joining in the new year.

Right, I'm off to consume lots of beer, spirits, vitamin pills, and Marmite on toast (I've been told that it's a failsafe hangover cure).

What's that? You never suffer from hangovers? Well, that's obviously because you, sir, are a lucky cunt with some kind of superhuman biochemistry.

Have a great time anyway, and that goes for all your family and friends, too.

That is only the world's second worst caricature of the Brown Goblin. The worst being that ugly fucking one that is always on the news and in the papers.

Unfortunately I will be having a very sober Christmas, with not a drop passing my lips. But I'm sure you could manage to force an extra one down on my behalf.

I always enjoy reading your blog and feel the same way about John Lennon and Gordon the moron.

Don't just talk about joining LPUK. Join. I did. The sooner we get some real alternative viewpoints out into the mainstream the better.

Merry Christmas DK and thanks for giving me many hours of thought provoking, amusing and blood pressure increasing reading. Here's to another twelve months.

Merry Christmas DK
thank you for such a great year of your blogging it's pretty major stuff. I quite agree on the things you have said about the political parties.
I love the DK blog it complete and utter crackers.
have a great new year

Inspired by this blog I have even posted on Christmas day

Keep it up DK and the rest

Merry Christmas DK...I've been down in the dungeon to plan a New Years Eve party.Got a few surprises.
Mincybottom of Boys...the white hot poker.
The 'Orange freak'.. a good old South African tyre neckless with a petrol cocktail.
Five bellies..a porcine spit roast.
The cunt himself...a couple of Afghan tribal women with revenge in mind.
Busted B...got some molton bullion to pour in his underpants.

Must wake up and pour another..