As regular readers will know, your humble Devil is an avid follower of alternative sources of power—nuclear fusion in general and the Fusor in particular.

However, Counting Cats highlights a novel process that I have never heard of before.

I haven’t mentioned this before, because it seemed just too weird. But, well, here is one for you, a company called Blacklight Power. To me, they sound like charlatans, but it looks as if there might be something real here. The problem is, if they are right the physics books will need to be revised and that is not something to be done at the drop of a hat - or the bounce of a molecule.

Seems they extract energy from hydrogen by dropping the electron into a lower orbit...

For those of you without a chemistry grounding, I will provide a brief (and very simplistic) explanation of what this means.

An atom is (usually) made up of a positively-charged nucleus (containing protons and neutrons) and negatively-charged electrons circling said nucleus. 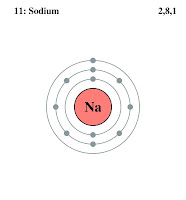 The electron shells of sodium. Note the single electron on the outer shell, which endows upon sodium its high reactivity.

The electrons are generally depicted as being on a series of successive orbital electron shells and each shell can only contain a fixed number of electrons. When the shell is filled, the electrons are added to the next orbital shell. (The outermost shell is known as the valence shell and it is this orbital which, to a large degree, determines the reactive properties of an element).

Each electron shell is said to have a certain natural energy range: the higher the orbital shell (in other words, the further from the nucleus), the higher the inherent energy required to occupy it.

As such, moving electrons between valence bands carries an energy value (negative or positive). In this case, dropping a hydrogen electron down to a lower shell (i.e. the next one in) releases energy. Except that, in a normal hydrogen atom, there is no lower electron shell.

Well, yes, that would release energy, if the electron weren’t already in the ground state. For those who know any physics this sounds like nonsense on stilts; hell, if the term hadn’t already been discredited I would almost be tempted to state that there is a scientific consensus that this can’t happen (snigger), but something is going on.

They have raised sixty million dollars in venture financing, and you don’t get that with just a sketch of a perpetual motion machine, half of their 25 staff are PhDs, and Rowan University, on testing a Blacklight “50KW” unit, have confirmed significant heat energy release [PDF].

In the actual heat experiments the calorimeter generated over 1.01-1.02 megajoules of excess heat of which only 9.4-11.0 kilojoules could be accounted for by our chemistry team. The combination and variety of testing by the chemistry team (TPD & XRD) generated results that characterized the primary compounds in the BLP materials and provided no evidence of other reactants, to the limit of the techniques used to characterize the samples.

Which is, I think you'll agree, all very interesting—especially given the fact that it should be impossible. But why is this important now?

The thing is, this is not just people playing around in laboratories any more, after years of work Blacklight has finally gone commercial. Two days ago in fact.

Yep, that’s right, they have signed a contract with a New Mexico power utility and are about to deliver on their claims, on an industrial scale.

Addendum: Apparently less than 2 cents per kwh - if it isn’t complete twaddle.

It's a very interesting idea, and one that I shall follow with interest. Still, if it does work, it's another process that will piss off the Green lobby: the thing that they fear the most is clean, sustainable power and one cannot really blame them—when you've spent decades building up a massive AGW hoax and suddenly human ingenuity finds a way around it, you are going to be mightily pissed off.

I wonder what their next excuse to take us back to the Dark Ages will be...?
By Devil's Kitchen at December 13, 2008

Ahh yes. Hydrino theory. Almost certainly complete rubbish. Excess energy measurements in calorimeters are famously difficult to get right, so I wouldn't get too excited.

Read the contract carefully. Very little is promised on either side.

Sounds like a load of pigeon poo to me. But then I'm not a physicist, I'm a pornographic cartoonist, so I might be wrong.

A bit too good to be true, rather like 'cold fusion'. We'll see how things pan out.

I thought an electron dropping to a lower energy level produced a photon. Admittedly, that is when it is stimulated to a higher level and drops back down again (as in lasers). So this may be something different, but I doubt it

This is pseudophysics. Go and read up about hydrino theory.

Ah yes, the non-integer principal quantum number. It's tripe. In so many ways, and these lot periodically come back. Don't pay them any attention, it's a waste of time that you could spend looking at LOLcats.

Also, if I remember correctly (I'm not reading their twaddle again), they borrow the same technique for excess energy that cold fusion researchers got so excited about. H2 absorption into stuff gives out heat, and quite how much is really dependent on exact experimental conditions. Yay! XS E over expected = cold fusion/'hydrino'= ... =profit.

Why would hydrogen be knocking about in an excited state? Would this be solar power by another name?

In the experiment, most of the 1 MJ was released in about 20 seconds, ergo 50 kW. Apparently below the zero state, the geometry doesn't allow for release of a whole photon. Instead, under certain conditions the electron can bestow momentum on nearby atoms resonantly, allowing it to fall to the lower state. General increased momenta translates into heat.

A 'New Mexico Power Utility' sounds quite grand, but the reality is less grand. Estacado Energy Services, Inc (something which has absolutely zero Google profile apart from its mention in the Blacklight press release)is a subsidiary of something absolutely tiny, and not grand at all.
http://www.rcec.coop/rcechome/employees.htm

When are we going to drill a hole and extract geo-thermal energy?

I wonder what their next excuse to take us back to the Dark Ages will be...?

Voodoo or witchcraft, I would think!

Is it a formerly suppressed technology though?

"I wonder what their next excuse to take us back to the Dark Ages will be...?"

Hum... I know! Cheap, clean power will attract the Dancing Piss-Weasels of Naarg and we'll all be dooooomed!!

Truly, the Devil is in the details of this rocess.

nonsense from start to finish. Note that some of Blacklight's patent claims have been rejected:
http://ipkitten.blogspot.com/2008/03/blacklight-power-sci-fi-science.html

However, the idea that investors can be persuaded to part with large chunks of money for absolute tripe is not a novel idea; see, e.g.

Jones - "A bit too good to be true, rather like 'cold fusion'" which seeing as this theory was created to explain cold fusion doesn't bode well.

That said it doesn't matter if the theory is wrong provided that the experiments are reproducible, all measurements accounted for, and yet still show the results he's claiming. Wouldn't be the first time that's happened.

I was under the impression that the energy levels that electrons can occupy is an inherently quantum result.

Quantum theory gives us wave-particle duality, which DeBroglie's equation quantifies to lambda = h / momentum (h being planks constant). That is to say, that anything with momentum has a wavelength.

The electrons orbiting a nucleus occupy energy levels such that the circumference of the orbit is equal to some multiple of lambda. If it were not so, the wave would not join up. It's not possible for them to exist in any other orbits. That is literally true - electrons aren't ball bearings, they are very small and don't behave how you might imagine them to. They actually physically cannot be at any other than these fixed orbits.

Sounds like total nonsense to me (my PhD is in Chemistry), but I wait with baited breath ...

I liked the first comment on 'counting cats', adressed to the blogger himself:
"Why do you cast doubt? If they’ve got a commercial contract then it must work. Utility companies don’t throw money into holes on a whim, not if they want to be commercially viable at least."

Do you think it is possible that the 'commercial contract' via the utility 'company' may not be financed through entirely private means?

For many years Randall Mills, the brains behind BLP, has been at war with the academic community (well represented here I see) over his alternative to QM theory that predicts hydrinos and excess energy. I think his investors (and true BLP believers) have told him that the best way to shut them up and focus some serious attention on his work is to have a commercially successful venture. It appears that he is trying to do just that with the NM Power Plant Deal.

If this is a scam, its a doosy. It's more likley that they have something that works in the lab and have convinced others it is scalable. If so, it may or may not be explained by Mill's theory but in the end, it may not matter.