A stroll, a speech and Bloody Devil #18

As some of you may know, your humble Devil wandered along to join in Old Holborn's stroll on Wednesday: there were about 30 attendees, of whom ten were masked and, in a couple of cases, in full V costume.

A brief stroll down Millbank and past Downing Street passed without incident, and it was on the corner of Parliament Square that the police&mdashmostly plastic policemen, in fact, who seem to be increasingly the de facto crowd control element (and always the most arrogant)—stopped us for "blocking the pavement".

The Guys were searched under the Terrorism Act; although reasons for doing so varied across the different slips, my personal favourite was "wearing a costume and mask in a public place". Here are some pictures courtesy of IanPJ... 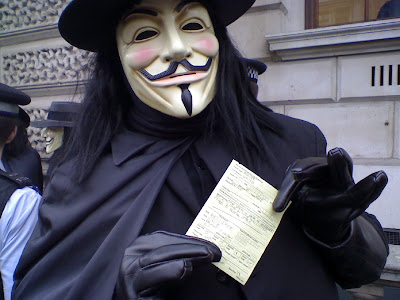 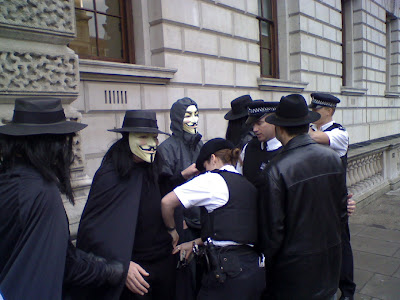 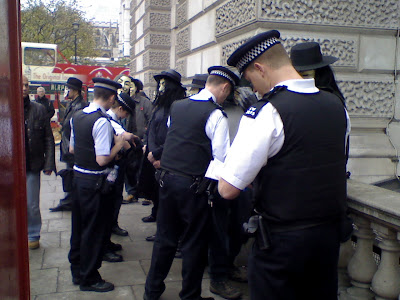 The Guys, naturally, refused to remove their masks and so your humble Devil found it absolutely hilarious that the police should therefore keep asking them for "photo ID" ("your papers, please!").

After this brief interlude, we continued our little walk, back to the pub from whence we had started. Back there, we discovered that the fuzz had been in there shortly after the procession had set off, in order to ascertain our whereabouts, so any idea that the pounce had been purely coincidental or spur-of-the-moment was utterly dissipated. 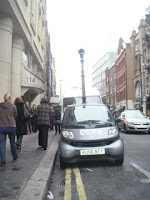 You are being watched.

Besides, as Old Holborn points out, this little CCTV car followed us around all day and the Trafalgar Square webcam was shut off "for operational reasons". All round, I think that we got the best possible outcome: there was no demonstration other than what we wanted to prove—that one can not walk the streets of Britain is a costume without being searched by police—and no one was actually dragged off to clink.

So, let's get some more people next year, eh? I shall order my mask in good time...

Next, of course, we wandered off, with Guido, to listen to Iain's horrible little chipmonk waffle on about the corrosion of politics. My immediate reaction to the whole thing was why—when we have the fucking speech on a piece of paper in front of us—did Hazel Blears even bother to fucking well turn up? She just read the speech out from the same paper that we had: I consider this kind of behaviour to be, amongst other things, just fucking rude.

The only bit that she added to the speech was a story about how Blears met a high-up, black, female lawyer in the US had organised a community to raise money and support for a hospital in danger of being closed. Blears asked said lawyer if she had thought of getting involved in politics and was apparently rebuffed in disgust.

The interesting point of this story is, of course, that it shows not only that Blears' sort are held in contempt across the Atlantic as well as here in Britain but also that for very many things, people are quite capable of acting, voluntarily, in the interests of themselves and their community without politicians being required.

I did not, unfortunately, have the chance to put any of my points to Blears because Andy Williamson (Director of the eDemocracy Programme, apparently. Ha!), who was the Hansard Society monkey chairing the meeting, closed down debate as much as he possibly could. To be fair to the chipmunk, she seemed quite up for a bit of argument but neither we nor she were given the chance. 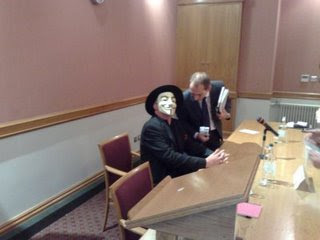 Although, to crown the afternoon off, Old Holborn managed to occupy the Chipmunk's chair for a few minutes. Mr Williamson was not impressed by this particular piece of democracy, of course... 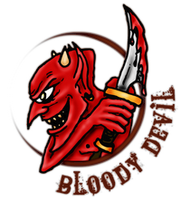 However, one of the best critiques of the substance of Blears' speech comes from Alix at The People's Republic of Mortimer, in a post that wins the Bloody Devil #18 for its incisive and blistering commentary, as well as the copious gratuitous insults.

I should bloody know. So should Blears, but she’s far too deep into the matrix now to remember that it isn’t real. And I probably wouldn’t be so terrified if she wasn’t also controlling the feeding tubes.

Most? Disdain? Not only is it perfectly clear to anyone with the slightest acquaintance with political blogs that ninety per cent are thoughtful and constructive, but more than that, how can anyone be so utterly cretinous as to believe that bloggers make all this effort and put in all this time to political discussion out of disdain?
...

And she thinks we do this out of disdain for politics?

…who see their function as unearthing scandals, conspiracies and perceived hypocrisy.

I BEG your fucking pardon? It is a BAD thing to unearth scandals, conspiracies and perceived hypocrisy is it?

This line alone, you see, makes me earnestly wish I’d spent less of the last year being elegant and witty about history and linguistics and more of it putting the fucking boot in to this awful, appalling government and the repellant automatonic freaks it harbours with no care for elegance whatsoever. Seriously, I used to think, rather as Hazel seems to, that trenchant blogging was just a bit silly, a bit too mutually-assured-destruction. Sometimes it takes hearing someone else’s back story to your shared opinion to make you realise you are holding very much the wrong opinion.

Unless and until political blogging adds value to our political culture, by allowing new and disparate voices, ideas and legitimate protest and challenge, and until the mainstream media reports politics in a calmer, more responsible manner, it will continue to fuel a culture of cynicism and despair.

Add value? Just. Fuck. Off. That is all.

She hates us purely because is revealing the lies and corruption her type are involved in, bloggers like you, Guido and the rest are performing a public service much more important than anything she and her comrades ever could.

I'm glad none of you were nicked and apologise for not having attended.

But if you had been wearing the full Islamic kit no one would have bothered you at all.

I apologise too for not showing, I was having a drink with a lady friend. "I'm off to stroll around parliament with internet people" does not a good excuse make.

I had a whale of a time

I didn`t know there was a walk around in V costume. Is it going to be every year ?

Was great fun and nice to meet you, OH and Guido.

I have finally downloaded all the video, converted it to a format I can edit and will start posting this week.

Sorry I didn't forward the above photo to you but glad you liked it.

Could you let us know the numbers on the shoulders of the costume-wearing scum pretending to be police officers?

Hazel blears sole contribution to the planet will be her decomposing corpse.

I have said it elsewhere, but those masks do have a habit of implying different expressions depending on the setting.

In the second picture down, the Guy being "frontally rummaged" by the WPCSO, is priceless...."liddle more ter the left, darlin..."

word verification: dilisac (I kid you not)

Anon, many of the PCSO's numbers are readable in the photo's on line. I don't think anyone was making particular note at the time though.

The more astute amongst you will also notice that the PC handed me HIS copy of the search order (the yellow copy) and walked off with mine (the white copy), rendering the whole exercise even more utterly pointless.

Of course I trust them with my DNA and fingerprints

Another 'show me your papers' moment from a Met PCSO who can, very nearly. speak English.

Indeed, it was a right giggle.

Was also a relief to discover that all these like-minded people of the interweb weren't cunts, and were exactly the kind of chaps you want on your side of the barricade.

Same time next year, only BIGGER.

If the police were following you to the pub, is it not worth making an IPCC complaint over the apparent breach of RIPA regulations regarding surveillance?

The twatty little Smart car with the CCTV pole has left me speechless. The idea that Mr State can follow you around filming you from such an absurd little piece of shit car just shows how far we have fallen. The bastards haven't even got the common decency to use a proper fucking car.

We really are on the verge of full blown Fascism.

As a reminder under section 45 (5) you've now got twelve months to apply for a written statement regarding being stopped under s44.

Oh and 45(3) a constable can ask for the removal of "headgear" in public(hmm I'm sure that goes down well with the Sikhs) anyway good job those officers didn't know that ;-)

Wearing a costume and mask in public. So why aren't these lame excuses for rozzers stopping every muslim woman (one assumes) in a burkha? It's a costume with a mask. I do believe one of you strollers did ask something along those lines of a real copper who declined to state the obvious. I will be along next year with a mate who I told about the stroll. Did it actually make the news anywhere? I didn't see any reports.

He can only ask you to remove a mask if he thinks you are about to commit a crime OR he is in possession of a signed Section 60AA.

face
• noun 1 the front part of a person’s head from the forehead to the chin,

headgear
• noun hats, helmets, and other items worn on the head

Difficult to argue that a mask isn't worn on your head.