Sweet holy fuck, do these people think that we are fucking morons or what? There can be no other explanation for this piece of shit (reported by the BBC without any qualification, naturally).

The government says it can afford extra borrowing because it has reduced debt over the past 10 years.

Patrick at the UK Libertarian Party blog has found a chart helpfully showing just how effectively the government has "reduced debt". 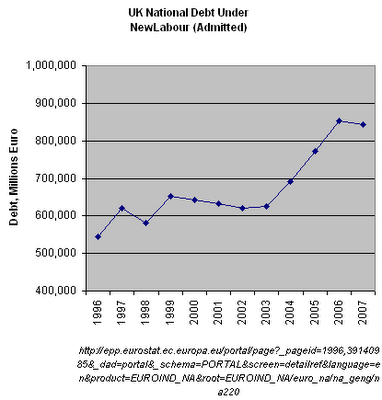 Silly Patrick! That graph must be upside-down because this way up it looks as though... well... it kind of looks as though debt has increased—massively—over the life of the NuLabour government. T'choh! I must be reading it wrong.

Nope. Debt has definitely increased over the last ten years. But this does not compute...

... for, apparently, the government can afford to put us even more in hock because it has "reduced debt over the past 10 years". And these innumerate lying fuckers are in charge of the banks now?*

I suspect that he's on about debt as percentage of GDP which has indeed fallen since 97.

Anyway, you can bet your bottom dime that the figures will shortly be far, far worse than they were in 97.

UK banks only hold a small fraction of government bonds. What banks do is deposit short term with the BoE, which promptly lends it back to them. In any rational world, the BoE would lend it back at a handsome mark-up, but not even that is true any more.

Technically, the Gorgon is correct. He has no debt. He doesn't owe a penny.

Now he's going to borrow more money in our names. Rather like that identity theft thing we're all being warned about.

"There can be no other explanation..."

I was having problems explaining to some friends of mine today that there are only 4 real ways of governments raising extra money:

1) Raise taxes; political suicide at the moment
2) Sell nationalised industries off; they can't do this as there's effectively nothing left, at least not that could be sold off in a hurry and besides who would buy?
3) Borrow via gilts; looks like the next issue may end up undersubscribed (the first time in a few years) as, with all this recapitalisation of banks the international markets will soon be awash with government debt, let alone that issued by crackpot new labour!
4) Run the printing presses; hello zimbabwe!

They couldn't see the problem with no. 4... Sometimes I worry about my friends knowledge of economics! And this is from supposedly intelligent people.

They also didn't understand the issue with the re-capitialisation of banks, i.e.

* Government borrows money from the market (mostly from banks) at a market rate of interest, as it can't afford to fund this through current taxation (although we'll be paying off the interest)
* Government then buys shares in the banks to re-capitalise them
* The banks then loan this out to US, the tax payer, charging interest on this
* At some point in the future, when the market stabilises, the government sells the shares, almost certainly making a loss
* The Tax payer is well and truely shafted

'will the government be borrowing from itself'

No.
The government is raiding your kiddies futures

The percentage of debt to gdp has nothing to do with it. The lying cnuts, Mrs Balls and Mandy in the forefront, are saying that they have REPAID debt. That is the lie, unless you count replacing maturing gilts with ever more wheelbarrows full is 'repaying'.

The situation would be far worse but for the windfall on sales of the 3G phone networks which raised at least 20 billion.

This went to repay the nat debt instead of being used to reinvest and fundamentally underpin the economy so it 'grew' properly and not bogusly.

THEN we could have afforded to spend to ease our way out of recession.

I imagine the flaw with quoting the % of GDP figure is that the GDP has indeed grown but to what effect (I am suspicious of the statistic anyway)?
Thanks to massive immigration we will inevitably increased our GDP - but per head its probably not budged.

It all just stems from a misprint in his "chancellor for Dummies" textbook that he got off Ebay in 1997.

Page 4 has "repaying debt is the same as borrowing money".

The missing word before the "the" being NOT.

It seems that NuLiebor's 'prudent' 40% debt/gdp ratio has been bust for many years now, even excluding the off-BS scams.

Who woulda thought it?

Brown was leaning over the top of the PC when he saw that Graph of Govt borrowing, its an easy mistake to make, give him a break.