Telescreens will soon be a reality...

As your humble Devil has mentioned before, I was taught that the political spectrum can be imagined as a torus—described simplistically, on one point of the ring you have anarcho-libertarianism and, diametrically opposite, you have totalitarianism: it doesn't matter which way you travel around the ring—left or right—from the anarcho-libertarian position, you will end up at the totalitarian position.

This is not to say that all societies start off anarchic and then reach totalitarianism (necessarily) but that end point, a totalitarian state, is the same result irrespective of whether you reached it by travelling Left around the torus or Right.

Now, one of the usual arguments in the blogosphere is whether or not the Nazis were of the Right or of the Left; yes, they were called the National Socialist Workers Party but many of their tactics are adjudged to be of the Right (and a turd by any other name...). The point about the torus theory is that it doesn't particularly matter what creed got you there (although the torus, being a three dimensional object two-dimensional object in three dimensional space, does, of course, allow for such shades of interpretation).

The only point is that a totalitarian society was created; in the same way that it doesn't tremendously matter whether Hitler (in Germany), Stalin (in Russia), Mao (in China) or The Party (in 1984) were of the Left or the Right: the end result for the people was much the same—oppression, slavery, constant monitoring by the state, imprisonment without trial, war, disease, famine and death on a truly grand scale.

The favourite tool of 1984's Big Brother was, of course, the telescreen: although it was primarily a mechanism for saturating the population with state propaganda, the telescreen also served as a high-tech and ubiquitous panopticon—although the state could not watch every individual constantly, no individual could be sure that he was not being watched at any one time. Combined with swift and dreadful repercussions for non-compliance, the telescreen was the ultimate tool of state control.

Thus it was with some weariness and resignation that I saw this article in July and predicted where it would go...

It is promised that besides showing news the screens will be used to promote culture; that they will be “digital canvases for local artists, film-makers and students”. But there is an ulterior motive, given away by Bob Belam, of Waltham Forest council. The screens, he said, would be used to “provide important information and will be able to get out messages about antisocial behaviour”.

They are less about entertaining us than about control – another part of the Orwellian machinery of the modern British city. It isn’t hard to imagine how they will be used: “We are interrupting coverage to remind you that bathing in the fountains is prohibited.”

Here's another Times article, from the same day, expanding on the this hideous proposal.

Civic experts, who recently heard a presentation by London 2012 after raising concerns about long-term planning issues, told The Times that the real ambition was for between 45 and 60 permanent screens. They claimed that Olympics organisers were being deliberately secretive about the true scale of the project.

I have no doubt that that is the case; after all, given that we already have CCTV cameras on every corner (some of which will bark orders at wrong-doers), wouldn't it be so very easy to imagine that these screens might be two-way?

Mind you, as the Libertarian Party blog points out, neither NuLabour nor Orwell were the first to imagine such a system.

Adolf Hitler Adolf Hitler and the Nazis were working on a Big Brother-style cable television propaganda industry to be broadcast across Germany.

Plans for the system were first found when Soviet soldiers entered Berlin but have recently been reexamined by researchers for a new Russian documentary.

The Orwellian screens would have been set up in public places and would show "people's television", depicting how the Aryan race should live, with the Nazis focusing on news, sport and education.

Ideas included building rooms beside laundries so women could gather round the TV to watch the broadcasts.

Prototype programmes included Family Chronicles: An Evening with Hans and Gelli, which was an early reality TV show depicting a wholesome Aryan life of a young German couple.

Engineer Walter Burch was asked to make the idea a reality, and tabled a document to Hitler called "Plan to supply people's transmitter to German homes" which would result in the laying of a broadband cable between Berlin and Nuremberg.

Other plans included showing footage of executions of Nazi traitors.

Perhaps it is time to bow down and worship our lords and masters? For soon there will be no option.

But perhaps I am being paranoid and hysterical? Yes, maybe I am. Yes, yes, I must be.

Never mind, I shall still be going on that little stroll on November the 5th: why don't you watch us all on the Parliament Square webcam...? 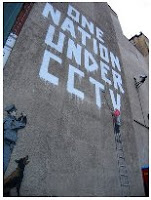 UPDATE: it seems that even Banksy objects, although this Times article coyly misses out a part of the slogan.

The striking mural, painted under cover of darkness, was intended as a stinging criticism of Big Brother society. So it will come as little surprise to its creator, Banksy, that bureaucracy has ordered the removal of one of his largest works.

The Times has learnt that Westminster Council has demanded that a mural by the pseudonymous graffiti artist, a 7m (23 ft) criticism of Britain’s CCTV culture, must be painted over. While other authorities have turned a blind eye to Banksy, the council said yesterday that it would remove any graffiti, regardless of the reputation of its creator. Westminster said that Banksy had no more right to paint graffiti than a child – which, ironically, is the subject of the piece in question.

The picture used here, showing the artwork in its full glory, comes courtesy of The Englishman...
By Devil's Kitchen at October 24, 2008

Ah yes, I'll be there with my drinks and nibbles....watching on the webcam, hoping that plod thinks it's another Countryside Alliance march.

Actually a torus is a two-dimensional object, embedded in 3-space.

never thought i would say this but great writing devil.

You noted of course in your rigorous Brian Sewell way that I sifted through many photos to find one that showed the cctv camera adjacent to the graffito - most don't and miss the delicious juxtaposition.

At this rate you'll all be sticking little black hoods over your webcams when they're not in use......

Ever hear of clickjacking?

Ooo-er. Will the powers that be end up outlawing / disabling the "Always deny" option?

I like the image of the torus rather than the horseshoe I was taught in school - i.e., that right & left were ends of a continuum but close to each other.
Still, I think the argument does matter about whether the Nazis were in origin left-wing. Post-1945, lefties smeared all their opponents with the Nazi brush. And assumed that because the richer people voted Nazi, and the church came to terms, then the "traditional right" were Nazi. They weren't, but they did vote Nazi. A subtle difference; like the Ku Klux Klan voting Democrat in America, because Lincoln was Republican.
"The right" was authoritarian and traditional, but not always totalitarian. The left can be reforming and liberal, but can become totalitarian. Lefties pre-1945 were often supporters of eugenics.
No tribe is pure, no label is a sure-fire indicator of morality.

From the Header of Old Holborn's blog:

Someone else may have said it first, but DAMN that's a good quote.