It seems very clear to me that politicians are a shameless bunch. And it was ever thus, glancing back through time where even reasonably good eggs like John Major were quick to be shameless when needed. However, the new century has brought with it some astounding levels of brass neck:

Of all the characteristics of a successful politician, none is more essential than bare-faced cheek. Never has this been more evident than in the past fortnight, as senior Democrat members of the US legislature have sought to lay all the blame for the country's financial crisis on the executive arm of Government and Wall Street.

Neither of these two institutions is blameless – far from it. Yet when I see such senior Democrats as Barney Frank, Chairman of the House Financial Services Committee, and Christopher Dodd, Chairman of the Senate's Banking Committee, play the part of avenging angels – well, I can only stand in silent awe at the sheer tight-bottomed nerve of it. These are men with sphincters of steel.

What is the proximate cause of the collapse of confidence in the world's banks? Millions of improvident loans to American housebuyers. Which organisations were on their own responsible for guaranteeing half of this $12 trillion market? Freddie Mac and Fannie Mae, the so-called Government Sponsored Enterprises which last month were formally nationalised to prevent their immediate and catastrophic collapse. Now, who do you think were among the leading figures blocking all the earlier attempts by President Bush – and other Republicans – to bring these lending behemoths under greater regulatory control? Step forward, Barney Frank and Chris Dodd.

But what I fail to understand is why people are not more aware of this? Why the fuck isn't this plastered all over the media in the US? Why the fuck do we have to discover this via a column in the Indy? And what about this:

Cynical students of the American political system will note that the biggest recipient of campaign contributions from the munificent duo of Fannie and Freddie over the past 20 years was one Christopher Dodd, Democrat Chairman of the Senate's Banking Committee.

Rather surprisingly, given that he has only been in the Senate for four of those years, the second biggest beneficiary was Barack Obama. 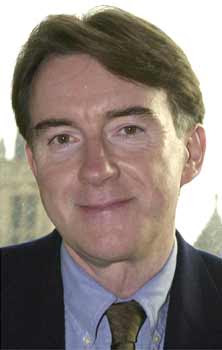 Luckily we don't have sphincters of steel here.
By Obnoxio The Clown at October 04, 2008

"But what I fail to understand is why people are not more aware of this? Why the fuck isn't this plastered all over the media in the US?"

'cos the US media is slightly less willing than the UK media to print gibbering lies from partisan hacks?

FM and FM were a very minor part of the crisis; only someone desperately trying to shift blame away from Wall Street and Alan Greenspan for political reasons would pretend otherwise.

And Dominic Lawson is that man...

Yes, Mr Bush and those other Republicans *tried soooo fucking hard to regulate corporate America*, but the Democrats stopped them...

Not plausible - look at Guido's cartoon of how many of the JC on both sides took money from Fannie and Freddie and Barney Frank comes almost bottom. Dodd you can have.

I like Barney Frank - he's a character, he's a libertarian and a friend of Ron Paul (who doesn't have many friends), he is the only Congressman trying to get internet gambling back online in the US, and he's funny.

All of them are pro-corporate ****s but Frank is one of the few who's worth a damn.

"FM and FM were a very minor part of the crisis; only someone desperately trying to shift blame away from Wall Street and Alan Greenspan for political reasons would pretend otherwise."

Heh. How desperate are you to shift the blame away from Fannie and Freddie and onto those dastardly fat cats...? ;)

And let's not forget the role of half-baked politically-correct nonsense legislation like the Community Reinvestment Act.

Maybe you should watch this video Burning the house and make your own minds up. Seems to me the rot started with Clinton.

As for Mandelson. Something is seriously wrong when you bring back a scoundrel like that. He is an odious, slimy sack of shit. I can only assume this is some attempt by Brown to shore up the Brazilian rent boy vote. How else do you explain it?

There is no better definition of cunt than that man.

The Sun's front page headline "I'm behind you" seems to be hinting at something in the relationship between Gordon Brown and Peter Mandleson but does anyone know what?

One analysis I haven't heard yet, but which I believe in is that the current financial crisis is a joint production featuring all the usually mentioned players but also the one group that the politicians on either side of the pond cannot afford to slag off at them moment.

Who took out all the iffy loans? Who furnished their overpriced burb boxes on the plastic? Who made up the numbers as they went along with the loan applications? Who stepped off the edge Step forward Joe and Joelene Six Pack of Main Street USA.

A fatal combination of lax bankers, sleepy regulators, venal politicians but most of all "We The People" blindly spending derived iterations of other people's money. It was always a bubble, an obvious bubble.

"All of them are pro-corporate ****s but Frank is one of the few who's worth a damn."

Ron Paul isn't. Not even slightly.

Because Ron Paul isn't a pro-corporate shill. Apologies if that's what you meant but it wasn't clear from your wording if you were having a dig at Paul or not.

Anyone else noticed that Mandy uses the word steel as a subliminal (Freudian) proxy for erectile pressure? Jesus that's guy's funny (but only in a "2 girls 1 cup" kinda way).

"Apologies if that's what you meant but it wasn't clear from your wording if you were having a dig at Paul or not."

Yes, I suppose that might not be too clear, sorry.

Ron Paul is a loon of the first order - the only things on the planet loonier being some of his followers.

He does liven up nomination campaigns, though...

"And let's not forget the role of half-baked politically-correct nonsense legislation like the Community Reinvestment Act."

i.e. none at all; purely an excuse for half-mad bigoted clowns with no understanding of the way the crisis unfolded to blame it on the darkies.

Why do clowns get all the bad press?

I think even the BNP would struggle to blame all this on "the darkies". Me, I'm blaming the predominantly white Congress, Senate and Commons for this.