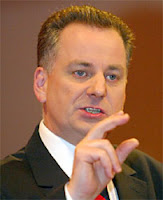 Jack McConnell: lest we forget. Jack is a fucking massive tool: he was a massive tool when he was First Minister and he is still a massive fucking tool.

Yes, yes: I know that retrospectives are lazy, but I do think that they have some use in putting certain events and people into context. After all, once these politicians leave office, they may be out of the public eye but they haven't stopped being utter cunts.

So, here is a couple of my comments on Jack McConnell, and a limerick too.

There's currently a talentless Jock
Called McConnell; he's easy to mock.
He bleeds Scotland dry,
Without telling us why;
He deserves to be kicked in the cock.

All of this is by way of introducing the poor little Greek boy's admirably pithy summing up of McConnell's past and current prospects in the midst of his excellent post comprising the lengths to which Brown will go to avoid a by-election.

Special representative on conflict resolution"? Jack Mcfucking Connell? What kind of butterballs do they take us for? The only real "conflict" oor Jack's ever experienced was the long-running battle between his straining zipper and his engorged cock - and he resolved that, you may recall, by banging his press officer and then - so it is alleged - sending a begging letter round fellow Labour MPs when party funds ran short, asking them to stump up for part of her wages to keep her from getting the chop, and thereby saving him a taxi fare every time he wanted his balls drained. High Commissioner to Malawi? Uganda would have been more appropriate.

Which is appropriate, I guess, since, as Scotland's First Minister, Jack McConnell presided for a while over the Scottish sex education policy which your humble Devil described as the "Fucking Stupid Initiative".

One of my friends is a teacher in the upper ends of a primary school, and she told me something that made me repeatedly bang my head off the table in frustration and frenziedly clench and unclench my fists in impotent rage. Now, as we all know, for bookdrunk has spelt it out numerous times (and god knows it is obvious enough), that if you wish to curb STDs and unwanted teenage pregnancies, then you need to educate the kiddies.

The government and the Scottish Executive have made much of their improved sex education, and obviously they are to be lauded for these efforts. Unfortunately, some of it is completely pointless, as my friend explained.

She is not allowed to teach her kids about contraception.

So, if any of her kids are sexually active (not beyond the realms of possibility, apparently), what are the chances that they are going to bring up the topic with their parents, do you think? So, you teach the kids about sex...

... and then don't teach them about not getting pregnant* and not getting STDs. Fucking brilliant.

Health is a devolved matter, so this is no Westminster stupidity; one might look rather more in the direction of the strong Catholic influences still rampant in Scotland. This is, without doubt, a fucking stupid policy, worthy indeed of the second-rate fuckwits who run Scotland, i.e. the Executive and the Church.

Truly, Jack was a worthy inheritor of that mantle. The man was a massive prick and, as I decided in my limerick, the only decent thing to do is to kick him in the cock.

Although, of course, in order to maintain the bounds of chivalry, you may need to wait until he's withdrawn it from whichever witless employee he's dipping his wick into these days...
By Devil's Kitchen at October 07, 2008

Or you could spend about eight seconds actually getting the metre right...

Today there's a talentless Jock:
McConnell - he's easy to mock.
He bleeds Scotland dry
And won't tell us why.
He needs to be kicked in the cock.

depends miss snuffleupagus, if it's taught the way that most subjects are taught at school it will put them off for life.