A dose of reality

Via The Libertarian Alliance, here's something for all those who still idolise this "evil, wicked murdering butcher"... 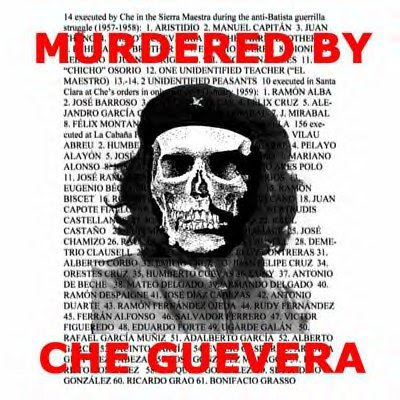 Let me state this for the record: Che Guevara was a fucking shitbag who didn't die in enough pain. And anyone who wears a t-shirt with his image on it is a complete and utter cunt.

UPDATE: thanks to the Anonymous commenter who pointed out that a number of the people who rule us are supporters of this murderous bastard, as this EDM shows.

40TH ANNIVERSARY OF THE DEATH OF CHE GUEVARA

That this House notes that 9th October marks the 40th anniversary of the murder of Ernesto Che Guevara in Bolivia; further notes the inspiration that Che Guevara has brought to national liberation movements and millions of socialists around the world; and believes that the sustained social gains of the Cuban revolution and the government of Evo Morales in Bolivia are fitting tributes to his legacy.

So, apart from John "the Prime Shit" McDonnell, here is the role of shame—twenty-seven MPs who supported this disgusting motion.

Every single one of the twenty-eight MPs listed above is a disgusting cunt, a supporter of mass-murder on a grand scale. And they seek to moralise at me—how fucking dare they?

What's next? Will these fuckers sign an EDM praising Stalin for his incredible improvement in the well-being of his people?
By Devil's Kitchen at October 17, 2008

As a student, I see this guy's face all too often.

I find this tends to irritate the wankers that think Guevara was a good thing. Expensive to import to the UK but worth it to see the faces of lefty maggots.

Riles me up too when I see T-shirts with CCCP on it, or the red star on caps.
I was unusual in school in the 1960's in being anti-Communist, on the simple grounds that 50 million dead, 50 years of concentration camps, and grinding poverty in the "Workers' Paradise" made the system purely evil.
The Communist paper, the Morning Star, was in the university reading room, without controversy.
Odd thing was, when communism collapsed I felt no triumphal glow of "I was right". Too many people had died for a self-satisfying smirk.
It will be the same for the EU. When it too fades from view, we won't exalt - oh, yes I will !!

I blogged about Che being a murderous bastard last year...

"The Che Guevara Myth and the Future of Liberty" is a good book about the real Che, by Alvaro Vargas Llosa.

But when the left kill,usually the only industry left its different you know ok and justified.

Thanks for this. I seem to remember there was support for Castro recently expressed by a number of Labour MPs.

Bring me my icepick.

'I love the smell of napalm in the morning.'

Look at at this way... the picture they use of of Che The Bastard is fairly young, foppishly fashionable with long hair and his soft hat showing iconic star, has that "looking up in hope to the future" sort of Communist propaganda pose and, significantly, has no real detail about it.

That's the thing. The left don't want detail; they want poses and "hopeful looks" which are easily reproduced and conveniently idealised. If they stopped to think... well, they might come to the conclusion that 'freedom' the way Killer Che had it was pretty reprehensible and not worth much at all.

And the fact that the odd D Skinner is in there doesn't surprise me one little bit. He's never been the same since his Miner's Revoultion mates failed.

Whilst we're giving Labour MPs a a kicking for their EDMs, I don't think we should forget the EDM signed in support of their other idol, Castro:

I've always believed I was alone in not feeling the Che magic. I was a youth way back when a Che Guevara tee-shirt was a must have item but having read about his exploits, I refused point blank to wear one. Now, for the first time ever I feel rather proud of my anti-rebelious streak.