Call Me Dave The EUphile 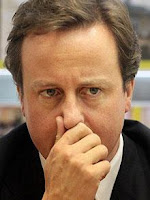 Dave Cameron: "I've just wiped my arse with my hand and... eurgh... it smells like my EU policy."

Oh dear, oh dear! It seems that poor old Call Me Dave is having a few problems with high-profile members of his party calling for Britain to leave the EU. And now, apparently, there's another one...

Maurice Golden, a 28-year-old campaign manager for Keep Scotland Beautiful, was asked by a political magazine which one law he would repeal, if given the chance. "European Communities Act 1972," he told the Total Politics website, without a moment's hesitation.

The European Communities Act 1972, which is the lynchpin upon which our membership of the EU turns. Repealing that one law would enable us to strike down all of the legislation imported through the EU's corpus juris and pave the way for a return to the common law system of which we were justly proud.

I have become convinced that even the vague possibility of a freer society—leave aside a libertarian one—is dependent upon us leaving the European Union.

However, as observers of politics might remember, this was never going to guarantee Master Golden any plaudits from his treacherous party leader.

The act took Britain into the European Economic Community and its repeal would entail withdrawal from the EU. Cameron declared only a few months into his leadership that MPs advocating withdrawal would be barred from serving on his front bench.

Mind you, Dave has said a long of things: I seem to remember, for instance, something about leaving the EPP in "a matter of months, not years". Was anyone else at all surprised that this was a massive, stinking lie?

So it seems inevitable that Spam has decided to reign in his errant child...

After Mandrake informed the Tory leader, who was campaigning in Glenrothes yesterday, about his candidate's remark, the pair appeared to have had a frank exchange of views. "David has spoken to Maurice and there is no question of him wanting to pull out of the European Union," said his spokesman. "Maurice believes that there should be changes to the act, but not that it should be repealed."

Really? You know, he seemed so unequivocable on the Total Politics website; obviously it was just an oversight by Maurice—what he meant to write was...

I don't want to repeal any law, because all of the laws on the British statute book are so utterly wonderful and brilliant—even the NuLabour ones. I can't imagine living without any of them.

However, if I must give an answer [it's made clear that you do not have to answer all of the questions, by the way—DK], I would say that I would like to make a few changes here and there to the European Communities Act 1972.

I don't want to repeal it, you understand—just make a few syntactical amendments.

Hey, Dave! How about not lying like the slippery politico cunt that you are and just coming out and saying what you mean?—that you love the EU with all of your heart and you absolutely will not countenance leaving under any circumstances.

And whilst you are about it, why not admit that all of that bollocks about "renegotiating Britain's deal with the EU" was just a massive fucking lie; oh, and why not carry on and admit that there is no way to renegotiate anyway?

Come on, you fucking bastard: why not tell the truth for once—you might find it liberating. I know that we in the UK Libertarian* Party do...

UPDATE: it has just occurred to me that I may have underestimated David Cameron (although I doubt it)—let me explain.

Cameron has been cracking down particularly heavily on anti-EU dissent amongst his elected members: but why now? Well, were I to credit Mr Cameron with any intelligence and, crucially, a more than healthy EUscepticism (I don't), I might wonder if his thinking did not run along these lines...

We all know that wind power simply won't do the job and also that, unlike Germany or Denmark, we do not have the infrastructure to import or export large quantities of electricity.

We also know that the EU will impose harsh penalties for building conventional powerstations and that, in any case, a coal-fired installation would take at least five years to come on-stream, and a nuclear reactor would take more like ten years.

There are two results then: either the lights start going out or we keep running those powersations into the ground—leading to a British Chernobyl. Either one would spell a swift end to the Tory government.

However, if Call Me Dave can hold off on the EUscepticism until one of those results actually comes to pass, he could easily call for withdrawal from the EU "whose insane adherence to unrealistic goals have brought us to the brink of disaster/have caused this disaster [delete as appropriate]**"—and he would win by a landslide (he could also publically hang Zac Goldsmith in front of a cheering crowd).

But, as I said, that requires Dave to be strategically intelligent, unbelievably Machiavellian and virulently opposed to Britain's EU membership. And I don't think any of those apply.

So, he's just a lying, fucking EUphile then...

* Oh, Dave? Just for your reference, that is libertarian and not libertine, you spineless wanker.

for sure he loves the eu! you don't think you get to be prime minister in waiting without do you? cameron is bought and paid for just as blair was. the eu, the african, asian and north americanunion projects are stepping stones on the way to global government.

If you want to leave the EU a Tory vote is a wasted vote. (As of course are votes for the Lib Dums and Nu Liebore).

Only (some of) the smaller parties will restore civil liberties, the rule of law and representative democracy. Even then no politician is to be completely trusted.

"Instruction: Imagine you are planning a dinner party, pick six people (living or dead) to invite.

At first I was a little taken aback by Maurice's response. But on reflection I can see there's no particular reason to suppose that the guest list and the menu should be mutually exclusive.

Did Maurice have Mandela down for the main course or just the hors d'oeuvres?

I don't believe that it takes 5 years to build a coal fired power station. Four years for all the planning crapola and a year to build, is my guess.

"I don't believe that it takes 5 years to build a coal fired power station."

Then you have no experience of the great British worker.

ps. The Poles and other east European workers will be long gone by the time these job openings arrive, as the German and other EU member state dams to internal migrant labour movement will have been removed as well.