What fresh hell is this?

The Highways Agency backed a move by Wiltshire County Council to block signs pointing drivers towards pubs – leading to concerns from trade chiefs that it could set a precedent.

Tom and Trisha Russell, who run the Black Dog in Chilmark, have built their business on passing trade from the A303. But the couple have now been ordered to remove their road sign – two and a half years after it was put up. “Up to 60 per cent of our lunchtime and weekend trade comes from weary drivers pulling over to take a break, entertain whining children and have some food,” Tom said. “Without our sign no-one will know we are here.

“We offer a take-a-break service and prevent people from driving when they are too tired. Our trade should be encouraged not penalised – we stand to lose 30 per cent of our business.”

Hard luck. Some bitch from the Highways Agency wants to make an example of you.

Jacqui Ashman, planning manager for a regional a department of the agency, wrote: 'The sign contains several lines of text and is therefore distracting to motorists.'

Actually, it's little more than the name of the pub, but the vile little bureaucrat goes on:

'It is also advertising the use of a public house to motorists, potentially providing the temptation to drink and drive while using a long distance trunk route.'

She added: 'No alcohol is allowed to be served or consumed in service stations on motorways as a matter of principle.

'We would wish to continue this principle by not encouraging drivers to break their journey in a public house.'

Anybody want to see this evil and "distracting" sign? 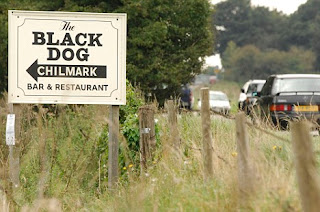 Picture says a thousand words, doesn't it? And all that remains for me to say is: Jacqui Ashman, whoever the fuck you are, why don't you go suck on a scabby fisherman's dick? You, personally, represent everything that is wrong with this country, you poisonous little fuckhole.
By The Filthy Smoker at September 20, 2008

This makes me so angry I can barely see my whisky.

When I first saw this story, elsewhere, I knew that I COULD believe my eyes.
ONLY IN ENGLAND.
No wonder there are so many mediaeval aliens living there now; They're used to living in shit-holes.
The land of my fathers. Weep, weep, weep.
I have one word for Jacqui fucking Ashman: DIE.
Sorry, two: PAINFULLY

There is an interesting logical fallacy in braindead Jacqui's argument. She cites the ban on serving booze in motorway service stations as a reason to ban advertising pubs to drivers.

She seems to think people driving cars would not be able to resist a drink if it were available before continuing to drive. As usual with these simple-minded superannuated dictators, the conclusion simply does not follow from the premise.

What she means is: "We do not trust drivers to visit a pub during their journey and not drink sufficient alcohol to put them above the legal limit to drive."

When these people try to foist their petty-minded bigotry on others they should always be sought to justify it by being asked: "Do you not trust people to [insert prohibited act] without [insert supposedly undesirable consequence]."

If they can provide a rational answer, all well and good. If they cannot, they should be sacked for gross misconduct. Seeking to prevent people from undertaking a lawful activity by accusing them of being unable to control themselves is gross misconduct for any public official.

Nope. I can't disagree with anything in the original post or any of the comments so far. Shocking. And i'm sure i've had a bottle of very expensive beer in a motorway service station before...

What a fucking bitch.

I have used this place a few times on my way down from London to see my parents in the south west.

Is the stupid cow going to require industrial estates built next to motorways to cover up any text in case drivers are distracted.

I have seen beer on sale at a Belgian service station - on tap, self service too.

We never get the good bits of Europe, do we?

Either have laws to prevent roadside advertising and enforce them, or allow a free for all. While you gobby fuckers up in London don't mind living in a garish shithole surrounded by hoardings, billboards and other advertising eyesores we yokels living in the country would rather just look at, well, the country.
If you buy a pub off the beaten track, you are not likely to get many customers, tough shit. I have't been in the pub for years but I doubt it is a country pub any more: it is likely to be a pastiche of what the Londoner sees as a country pub.
Illegal signs and hoardings are removed by the authorities, fuck all to do with what is advertised, and you all fall into the trap of giving the poor hard done by pub owners free advertising.
Country people on minimum wage can't afford to drink in pubs any more..... so fuck 'em let them pay for their advertising.


The motorist would do better to ignore the sign and look out for the speed camera just up the road.

By the same reasoning, she should get rid of half the road signs which clutter up the highways and also get rid of supermarket signs as they sell cheap booze and also ...

like all totalitarians, her arguments sanction endless interference in our lives. Which is no accident,'cause she hasn't finished yet!

As if drivers are too child-like to not drink alcohol. And by the way, don't motor services sell newspapers. They're dangerous to read while driving too - ban them!

And hang on, surely virtually EVERY pub in Britain has parking facilities or is near a road, sign or not?

The point is, it's no good just expressing displeasure - how do we fight this crap?

Perhaps a few letters of complaint from potential customers to Mzzz Ashman's boss asking for evidence-based justification of this decision and Mzzz A's capacity to take it, letters to the Transport Secretary demanding justification of the Highways Agency's powers to make such decisions and to motoring organisations asking their opinion?

I hope that the pub owners aren't just going to roll over and accept this without a fight.

And this is from an agency of the same government that brought us 24 hour drinking and projectile vomiting...

Filthy Smaker, have you a picture of Ms Ashman please..... I'm a scabby fisherman but as yet am not sure if your advice should be taken.
I'm just putting together a blog posting on this, things are not always as they seem.

Filthy Smaker, have you a picture of Ms Ashman please?

Alas no. If you can't find one, perhaps a picture of a bulldog licking piss off a nettle will suffice?

I've been out in the sunshine in the beautiful Wiltshire countryside.... tough but someone's got to do it...
some thoughts and pictures to elaborate on a possible story behind a story..
http://haddock-somethingfishy.blogspot.com/2008/09/not-as-things-seem.html

Haddock - it's not the sign, it's the attitude. Signs come and go all the time and nobody bats an eyelid.

To have this woman dictating that drivers are so weak-willed they cannot resist the lure of booze, and that the mere suggestion of available booze constitutes an evil temptation that must be purged, is just another symptom of the control our 'elected representatives' think they must exert over us.

Nobody cares too much about the sign itself. What's getting people angry here is being told they're too weak to resist it.

Arrogant, authoritarian, patronising, smug and power-abusing. To name but a few. What a frightful little shit this Ashman is.

My local commemorates violence towards women, specifically regicidal decapitiation. I'm sure the Ashmans of this world are applying pressure to rename it.

The people who put up the signs know bloody well that they should not, the authorities tell them to take them down and that is usually the end of it. Permission for advertising alongside a trunk road is seldom given, if it is, it is usually in the form of a brown information sign such as the one (paid for) by the Farmer Giles concern which is legally affixed to the sign at the junction.
I know that, you know that, everyone who reads newspapers knows that. These people are creating a big fuss and the silly woman has played into their hands by coming out with the booze thing instead of just saying no you can't have a sign there.
What is it with Libertarians and booze ? there is more to life. DK was banging on about the right to be getting pissed and objectionable on the Tube as if it is a major 'umin right.
If a libertarian is so fucking stupid that he can't find a boozer for lunch, should I have my countryside despoiled by bloody signs at every junction ?

"What is it with Libertarians and booze ? there is more to life. DK was banging on about the right to be getting pissed and objectionable on the Tube as if it is a major 'umin right."

What is it with you people and your insane and totalitarian desire to force your personal morality onto everyone else?

You are the same people that will bang on about freedom for your own personal hobby-horses too.

Look, supporting freedom means tolerating those things that you don't particularly like, as well as those that you do.

I don't give a crap about fishing, haddock; should I be allowed to ban it because I personally believe that you make fish suffer?

Try -- just try -- to think about something other than your own personal desires. I know it's tricky, but it is the bedrock of freedom.

HWOA! Hold thy horses, cock!
Perhaps you are reading too much into this? If the sign were a brown tourist one then the council would have no complaints. But it is a private sign for which I doubt the good Landlord/lady are paying for the rent of the land the sign is on. Therefore Mzz Ashman is using the 'Stop drink driving' line to justify taking it down. If it was paying rent to the council then.... Or maybe I'm just a cynic?

Maybe they should stop selling booze in parliament. Because you know that MP's can't be trusted to walk past a bar and not get pasted before voting on something important.

This is a long standing tradition and the pub should ignore the highways agency fascist.