Harry Potter and the Half-Mad Bitch 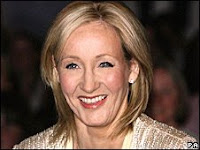 You know, I had always assumed that J K Rowling's simplistic, amateurish writing style and tediously predictable plots were simply an artifice to snare children into reading her books, but it appears that she really is that fucking simplistic and stupid in real life—who'd have thunk it?

Harry Potter author JK Rowling has donated £1m to the Labour Party, the party has announced.

Ms Rowling said she was motivated by Labour's record on child poverty and opposed a Conservative plan to give tax breaks to married couples.

I assume that Rowling was motivated by Labour's supposed record on child poverty, rather than their real record on actually improving children's lives and prospects...

Her donation will boost Gordon Brown as he tries to calm unrest among party members at Labour's annual conference.

Mr Brown said he was delighted to have the backing of "one of the world's greatest ever authors".

Fucking hell, Gordon: I know that you have to flatter the old witch somehow, but do you have to lie so very blatantly?

Come on, you are supposed to be incredibly well-read; if this is indeed the case, you would know that, objectively, J K Rowling would struggle to be The Greatest Living Author Resident In Edinburgh's Merchiston Area. For fuck's sake, she only just scrapes in as The World's Greatest Living Author Called "Rowling".

JK Rowling, whose fortune was estimated at £560 million in this year's Sunday Times Rich List, is known to be a personal friend of Prime Minister Gordon Brown and his wife Sarah.

Gosh, that makes her £1 million donation seem rather mean, eh? Still, I think that Iain Dale summed it up nicely...

I laughed out loud when I heard that J K Rowling had given £1 million to the Labour Party because, you know, they have been so brilliant on child poverty. Did it not occur to her that giving a childrens' charity the money might have been better bang for her buck, and improved the livs of far more children than giving it to a political party would.

Iain titled his post Arise, Baroness Rowling of Hogwarts which shows, I think, a shocking level of cynicism. Surely someone as noble and selfless as darling J K wouldn't donate a million just to add to her OBE?

What is very bizarre, of course, is that there is a strong streak of anti-authoritarianism—and, indeed, almost libertarianism—running through the Harry Potter novels (yes, I have read them, in between waiting for far superior contributions to the genre from Iain Banks and Diana Wynne Jones*) as noted by many—including the Taxpayers' Alliance and your humble Devil.

Still, this donation shows that J K Rowling should be right at home amongst the politicos—they, too, say one thing and then do quite another.

UPDATE: Rowling's neatly skewered by The Spine (yes, it has returned). 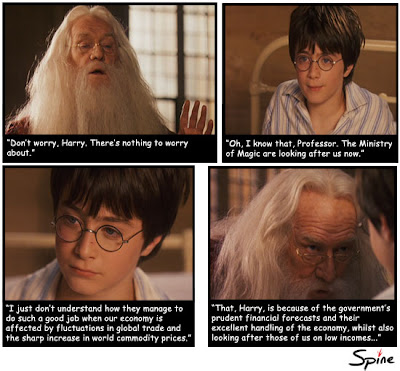 So, as darling Polly deserts Gordon, it seems that he has exchanged one silly old harridan for another...

I just want to say, if JK Rowling really wanted to pointlessly squitter a million quid on a shiftless, directionless loser who hasn’t got a clue what he might be doing this time next week, she should have given it to me instead of Gordon Brown. She’d have saved herself all the shitty publicity that’s coming her way. Buying me beer is a much more ethical use of her cash.

I would like to second that emotion. And a million quid would buy quite a few beers (and a substantial amount would still go to the government, so J K could kill two birds with one stone. Hmmm, that's an idea...).

* The mind-fucking Hexwood, the beautifully imaginative Fire and Hemlock and the plainly brilliant Power of Three remain three of my absolute favourite books. Fire and Hemlock, in particular, is an updated version of Tam Lin and is quite, quite brilliant (and I love the cover of this edition too).

Diana Wynne Jones is "one of the world's greatest ever authors" (and she's still writing), beside whose work J K Rowling's is revealed as a mere shade—pallid, unimaginative, incompetent and illiterate.
By Devil's Kitchen at September 20, 2008

You weren't slagging her off for having "simplistic, amateurish writing style and tediously predictable plots" when you thought she was on your side, were you? At that time, you didn't have a word to say against her.

However, it doesn't alter the fact that her writing is not very good. And are you telling me that you didn't see the "Harry is a Horcrux" thing coming when they were first mentioned?

You can see it here

Sorry for the shameless plug, but I think it's funny...

It would be too much to hope that those whose education has been ruined by Labour could organise a JK Rowling book burning.

I have read her books, I am glad to say that I have not paid to do so directly.

Harry and Paul had Tony Bliar in his Natwest job last night - if only the scenarios envisaged could be real.

J K Rowling would struggle to be The Greatest Living Author Resident In Edinburgh's Merchiston Area.

Perhaps Ms Rowling would have found it less of struggle to bring up her child if she'd spent her days doing paid employment rather than sitting on her arse in cafes around Edinburgh writing a book about a wizard?

DK, let us embark upon a thought experiment. Let us suppose that you or I were mindbogglingly rich, and wished a certain Gordon Brown and his manky Labour Party ill.

Clearly the Labour Party is going to get routed at the next election. Equally clearly, the longer Gordon Brown stays in power (and stay in power he will, for nobody wants his job for many reasons) the more severe a kicking will Labour receive when finally the electorate have their say, especially since there is no way, even temporarily, that Labour can bribe their core voters on account of already having spent the bribes.

So, how do you line up Gordon for the maximum possible kicking?

Easy: you donate a large but not life-saving dollop of cash to Labour, to encourage Gordon to stay at his job and to carry on plumbing the depths of unpopularity, but not such a big dollop that the Party is saved from bankruptcy on losing the next general election.

That is, in effect, what Rowling has done; she has set up Gordon for the kicking of his life.

Were she demonstrably smarter than she actually is (the Harry Potter series was just someone copping lucky and hitting the public mood just right; a combination of a good initial book and genius-level publicity) I could very well believe her to be a closet Tory.

Unfortunately I honestly don't think she's all that smart; there isn't going to be another Harry Potter series again, since she just doesn't have it in her to write one; similarly I doubt she sees how she's just set up Labour for electoral oblivion.

Now, if the Lib-dems could just get their heads out of their arses and start sounding like an electable party, they'd have a very good chance of consigning Labour to the also-ran category and becoming the official Opposition next time.