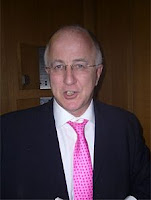 Denis MacShane: an unpleasant sack of shit who—unable to win the pro-EU argument on economic, cultural or influence grounds—prefers to resort to insults and smear tactics. (Yes, yes, I know: pot, kettle, etc. Except that I can win the argument without resorting to said tactics: I choose to insult the turd.)

Denis MacShane has written a piss-poor review of a book by Chris Patten (another pro-EU fuckhead) and has the temerity to wheel out the usual lies about opposition to the EU.

In Berlin recently, David Cameron promised a referendum on the Lisbon Treaty were he to become prime minister and the Treaty were not to be ratified. That would mean that the first period of any Tory government unleashing, as its main contribution to international politics, a festival of xenophobic hate against Europe. The Tories, BNP, UKIP and the Daily Mail would win the vote – but at the cost of reducing Britain's influence across the Channel and Atlantic to zero.

Look, you screaming little turd, it isn't xenophobia—an irrational fear of foreigners—as Timmy (a resident of Portugal for many years, and of many other countries before that) quite rightly points out.

You’ve still not got it, have you?

It’s about the specific political structure that is the European Union.

Quite. And fuck our influence over the Channel: why the hell would we want to influence—much less be shackled to—a continent in terminal decline?

Our influence, Denis, would be quite large enough were we to reconnect with the Anglosphere—in fact, our influence would cover far more of the globe than as part of the EU. Our military—over-stretched and under-funded as it is—is still one of the biggest and, objectively, the best in the world.

We are the fifth highest GDP in the world, and rated fourth for innovation. Both of these figures would be massively boosted once we have shaken off the EU albatross.

Our influence across the Atlantic is already great enough and, if our politicians could just find a pair of balls, it would be even greater.

My desire to withdraw from the EU is absolutely sod all to do with xenophobia and everything to do with wanting to improve the lives and prosperity of every individual in this country.

So fuck you, MacShane, and the fucking hybrid fucking car you rode in on: you are an ignorant, insulting waste of space.
By Devil's Kitchen at September 28, 2008

Yeah, but the best bit is that even Dennis McShit admits the result of a referendum would be a Big Fat 'No'.

The use of the word "Europe" when it suits, for example. All he cares about is that the EU opens up a great long trough perpetually filled with fresh steaming swill without even having to bother asking those silly voters for it.

I am not sure whether the europhiles use the "anti Europe" epithet rather than the correct "anti EU" statement because they are pig ignorant or because they know and merely want to wind us up.

Either way it shows they have lost the argument.

The only reason that we are still in the EU, a diplomat explained to me, is because of the supertanker effect.

Our lords and masters lost their faith in us at about the same time as they lost the empire. They needed somewhere to hide and the "common market" looked like the place. So a complete switch in policy was put into effect: out with the empire - in with the EU.

We are still stuck with that policy: not because government knows its best anymore but because they cannot think of anything else. Nevertheless it is a shell by now. Like the empire itself, like the communist system, it is ripe for shattering.