You cannot believe a word these people say...

THE vast Arctic sea ice which spreads across the North Pole could disappear during the summer within a decade or two - or even by 2013 - leading scientists are warning.

The Canadian Coast Guard's strongest icebreaker, the Louis S. St Laurent, took the Herald and an ABC Four Corners crew with a team of scientists going to the Arctic at the beginning of this summer's melt in July to explore the extraordinary changes there first hand.

Only a few years ago, climate modellers predicted the sea ice would not disappear in summer until at least the end of the century.

"Not only do I see the change, but it's like they're moving the goalposts toward me and it's an amazing thing," he said.

Yes, that is pretty fucking amazing, isn't it? Or is it?

Er, right! This is why arctic sea ice is reported to be around a million square kilometres greater in extent than it was this time last year (see pic below) – nearly 400,000 square miles … 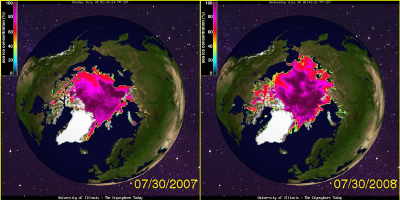 Still, like the plucky little vessel full of oceanographers, the article bravely steams on...

The icebreaker's route took us through thick sea ice at the entrance to the fabled Northwest Passage where over the centuries many navigators perished, most famously Sir John Franklin, a former governor of Tasmania.

Last year the Northwest Passage was virtually ice free for the first time in memory when the Arctic sea ice shrank to its lowest level since satellite observations began.

And, of course, in 2007. So, ignorance or deception on the part of the hack writing this crap? Who knows?

Because, with the writer having made two shitty assertions in the first few paragraphs, I am afraid that I turned back to port, tired of the hysteria and deception.

Meanwhile, the plucky little AGW vessel, with ever more of its crew vanishing, continues to sail into an icy reception..
By Devil's Kitchen at August 03, 2008

I, too, turned back to port in despair, because the Good Ship Folly-pop will not be stopped without a silver bullet through the heart - in this case, perhaps the think tank engine room, richocheting off as many crew as a clever shooter can manage. Burial at a crossroads probably isn't feasible, given the circs, but burial at sea works OK for me.

This is a genuine question: What the hell motivates these people, given that they are too transparent to win a hand of bridge?

Those idiots at the SMH don't know their arse from their elbow (I have to put up with the SMH as my daily rag). I picked up a whopper of a mistake over the weekend:

The stupid bastards are still using a photo that was exposed as a fake a month ago.

Gives you an idea of the fact checking that the SMH goes in for. The ABC is just as bad. The ABC hosts a program called Media Watch which is supposed to pick up on these sorts of follies, but since they are in bed together like two hot lesbians, I doubt they will give it a run.

But I hope you will.

Don't you just wish they would hit an iceberg..

Looks like Svensmark's got it right... if the AGW brigade ever allow his research out the the General Public...

See the book 'The Chilling Stars', and Svensmark's published scientific papers, and CLOUD at CERN...

Little did you know that they made a documentary as well... you can see a clip here... but it's unlikely to get airtime...

Note the countries who have bought it to broadcast.

I've thought of a new boardgame,it's called ClimateDelusion.You have a pair of dice and marked squares with Artic pole cap, rain forest,carbon emmission, etc.etc and various cards with licenses and fines.You then roll the dice and move a small replica of a well known climate twat such as Al Gore.The object of the game is to bankrupt all Western Democratic countries before the sheeple find out. The first one to do so is awarded the Order of Lenin and a pass go, free Carbon Trading license.

See the final comment at your Freeborn John link - there are two different definitions of "north west passage", and the one which has been navigated lots of times is not the one which the fuss is about.

Leaving aside 'why?' they would need an icebreaker in the first place, you are on a definite roll Mr. Devil.

Seriously though how can the crap from the warmists be countered?

The bullshit about GW/Climate change seems embedded in the brains of journalists broadcasters politicians etc etc and just trotted out with little or no thought. It seems that they took it on board at university or wherever and have not bothered to keep updated. Why? Laziness or they found something to "believe" in. Shaking someones religious belief is almost impossible but the contrary view, the truth is making little progress it seems to me. Maybe it needs someone like Call Me Dave Cameroon to stand up and say he thinks it is all total society damaging crap. Any hope ?

Presumably, John B means the comment that ended: "However, the ice retreated in the early 1800s as well, and we're still here :)"

I didn't respond to it, because it was true. But these are not the terms in which the BBC and others reported this last year. They simply said things like "for the first time since records began...".

John's campaign of passive-aggressive complacency in support of left wing issues is as incomplete a response here as it is on economic issues.

The point is that Amundsen (1906) didn't choose that date because the water was open. That was just when he went.

It is true, of course, that there are times when it is more open than others, varying to quite a degree, but it has been like this since this areas was first explored.

Exploring in the early phase (1815-1860ish) was almost pot luck depending on the state of the ice.

Of course, this exploration started because vast chunks of ice disappeared around 1816 ; the artic ice was estimated to have retreated about two degrees north, opening up places like Baffin Bay and Spitsbergen to easier exploration. The reason for this massive ice loss is unknown , save that it wasn't global warming.

Thanks for the link.

It gets worse, by the way: deliberate fraud, perhaps.

You cannot believe a word these people say ...

... especially if they're called Peter Risdon.

It's got worse, by the way: deliberate fraud, no doubt.