They are watching you

The Metropolitan Police have launched a crime-mapping service, so that you can see how your area fares. My ward is, as it happens, average; in June and July, there were only 4 Burglary, robbery and vehicle crimes reported apparently.

I can believe it, for I didn't bother to report it to the police when my car window was smashed the other day.

As such, I don't know whether to be reassured or slightly apprehensive that I received a letter from the Met on Saturday morning; they were, they said, very sorry to note that I had been the victim of a vehicle crime. Well, thank you for that: although I do wonder whether the crime number indicated is for me personally, or whether it covers al of the vehicles on that road that we done over.

I can only assume that the police noted the plates of the vehicles that had obviously been broken into, and then looked up the registrations at the DVLA. In which case, one might have thought that they could spell out my whole name: it is not "Mr Mou"...

Still, Burning Our Money has more on the crime maps, and he has noticed something a little awry...

And in a spirit of thanks and celebration, we asked our man on the Hill to test drive it. Does it correspond to his perception of crime down his own particularly mean streets?

Straightway he was puzzled. On the Met's crime map, Primrose Hill is coloured blue, which means it's a "below average" crime area. But how could that possibly be? Below average crime for an area that's so scary the residents have to hire private security guards? 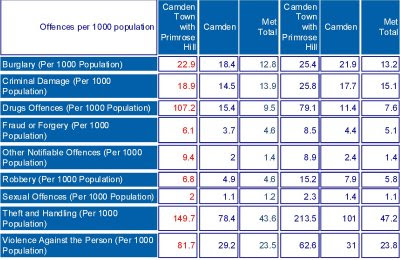 Now, can you by any chance spot the jump-off-the-page-and-smack-you-in-the-gob pattern?

Yes, correct. For both 2007 and 2008, his hood (Camden Town with Primrose Hill) had a much higher crime rate than both Camden generally, and the Met as a whole, FOR EVERY SINGLE CATEGORY OF CRIME. Every single one.

Indeed. Still, this kind of information is still a step in the right direction...

I see Westminster is full of criminals.

No surprise there. Nice to see it official though.

From now on, your name is Mr. Mou and this is Mr. Mou's Kitchen (which might actually be a good name for a chinky restaurant).

Could it be that by going round the streets like this "harvesting" crimes they are able to improve some target figure or other. Gits

From the Met website: "Please note, that whilst every effort is made to record the details of crime and its location as accurately as possible, there are occasions when victims are unable to provide the actual location of a crime. In these instances, the site will not be able to display all the crime reported to the police." Slight problem, n'est pas?

Surely it's obvious. Primrose Hill has a below average crime rate, Camden Town a much above average crime rate, so much that together they are higher than Camden (a borough) and Met Total (the whole of the London area)? This is what the maps show, after all.

Isn't Primrose Hill where all those celebrity faggots live ?
The ones you see in the sidebar on the Daily Mail website ?
Peaches Doherty, Jude Agyness and Moss Cottage ?

If they are get crimed upon then good. Bunch of fucking spastics, the lot of them.

Any bunch of idiots can get criminals off the streets and keep people safe, but there is more to modern policing than that, oh yes! Where is the Community Outreach? Where are the faux expressions of regret about crimes being "a tragedy for the family concerned"? I bet there isn't a single diversity co-ordinator amongst the lot of them!

Well, this kind of information looks like a step in the wrong direction.