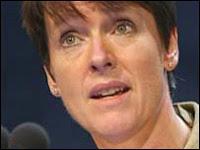 "Hi, I'm Caroline Spelman and I'm as guilty as hell."

I share several things with young Master Guido: a belief in libertarianism, a distinct fondness for the sauce and a tendency to get in a rage when politicians—of any party or none—abuse the taxpayers' already over-generous provisions. In short, neither of us like filthy, corrupt, patronising, totalitarian scum ripping us off.

As such, it seems almost superfluous for me to flag up the... ah... dodginess of Caroline Spelman but since I failed to do so when l'affaire nanny last came up, I feel that it is worth mentioning the latest shameless behaviour from this odious, venal woman.

Over the weekend the News of the World revealed that Conservative Party Chairman Caroline Spelman's Chief-of-Staff, Simon Cawte, was paid out of her parliamentary expenses for two years (2006 & 2007). Parliamentary Staff Allowances are prohibited from being used for partisan purposes.

Naturally, CCHQ started lying like a bunch of bastards. This doesn't alter the fact that Spelman has quite obviously been paying Tory Party staff with our money.

When you are Chief-of-Staff to the Conservative Party chairman and she is under investigation for expense fiddling to pay for her nanny constituency secretary there is bound to be some scrutiny of your status. Simon Cawte has not yet satisfactorily explained how when she was in charge of the Tory local election campaigns he, as her Chief-of-Staff, was performing a non-partisan role paid out of her Parliamentary Staffing Allowance by the taxpayers.

Off the record and in the comments here CCHQ insiders say "everyone does it". That is not a defence, that is an admission of guilt.

Quite. They are all at it, the fuckers; all of the parties are screwing us over systematically. And it is because they are all total cunts, each and every one of them. Oh, and when the Tories get in, the parties will continue to screw us.

What a collection of fuckers.

From reading your blog, your seem more like a fascist.

That is because you are a moron.

My only prayer is that when this next shower get in they will at least put the fucking country back on an even keel so it at least wont hurt so fucking much when they screw me for more of my slave labour.

When Christina Hamilton was asked about theft and bribe taking her explanation was "everyone was doing it".