A person who is worse than Gordon Brown... 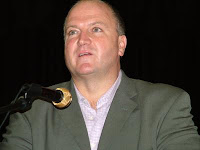 This man is a cunt. There really isn't any more I can say... oh... wait... yes there is. If you see Bob Crow, do feel free to punch him in the face, eviscerate him, hoof him repeatedly in the knackers and then beat him to death with his own face.

So, the Tube Lines maintenance staff, led by RMT's Bob Crow, have decided on two 72 hour strikes just to piss everybody off.

Around 1,000 London Underground maintenance workers are to stage two 72-hour strikes in a dispute over pay and conditions, threatening "massive" disruption to Tube services, a leading union announced today.

Members of the Rail Maritime and Transport union at Tube Lines will walk out at 12 noon next Wednesday and again from noon on Wednesday, September 3.

The workers voted by more than three to one in favour of industrial action in protest at a 4.85% pay offer, which the union said was an inferior deal to one accepted on behalf of staff employed on Metronet contracts.

4.85%? That's not too shabby; I warrant that it's way more than most people in the private sector will be getting this year. And this bit is just barking...

... the union said was an inferior deal to one accepted on behalf of staff employed on Metronet contracts.

Yes, Bob, that's right. Where the fuck have you been? You obviously failed to notice that Metronet went bust and had to be bailed out by the... oh, hang on...

Fuck me, Bob Crow might be even more of a cunt than Batshit Miliband...
By Devil's Kitchen at August 13, 2008

It makes me f*cking furious when I hear public sector workers bleating about how unfair life is when their pay deals are below inflation.

These idle sods not only are not contributing to the bloody economy, they're draining it.

In the big, bad REAL world of the private sector there's no question of 'fairness' - market forces determine what you earn.

Do they think that they're owed a living? Yes, they evidently do.

This is my favourite bit:
"beat him to death with his own face."
Classic.

No surprise there then... Unions and customer service... poles apart...

Would it be too much to say that the Unions are digging in in preperation for a Tory government? Perish the thought.

Hang on, Bob Crow is nowhere near as bad as The Goblin King. He once said something that made sense, like, he wasn't too keen on the ban on alcohol on the Tube (introduced by that fat Tory bastard).

Hmm... beer on the Tube journey home + one or two days strike a year OR no beer + strikes anyway?

No it's not actually.

The man's a cunt pure and simple. If those bastards strike woah betide any worker who I come across. I'll kick the sod in the shins.

They get paid a fuckload more than I do. Shitbags.

I got a 2.6% rise this year so if this little scrotum dweller thinks he's getting sympathy from me for a 4.85% offer then he can fuck right off. I'm bored of unions and public sector whingers going on strike. If it's that shitty they can all fucking resign and us private sector workers will come and take over. Whinging twats.

While my Top Ten Most Loathed fluctuates with the topical issues of the day, Bob Crow is always in it. This man IS the Unions personified.

Anyone wanting to have a bit of bovver wiv Crow just needs to hop on the eastbound Central Line, get out at Grange Hill and hang around.

beat him to death with his own face.

I bet the fucking prison population have more qualifications than this shower of shite.