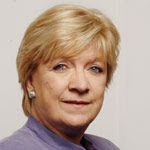 Polly Toynbee: a face like a clumsy beekeeper or a womb full of rusty spanners.

That's right, Polly Toynbee has written yet another hypocritical book.

The gap between rich and poor is wider than ever. But that doesn't seem to bother Britain's wealthiest earners.

Well, Polly, you evil old bag, I am not one of Britain's wealthiest earners—in fact, I earn almost bang on the median wage. And do you know what? The gap between rich and poor may be wider than ever but I still don't care.

In an extract from their new book, Polly Toynbee and David Walker describe the jaw-dropping arrogance they encountered when they asked some of the fat cats to justify their lives of luxury.

You fucking what? Polly Toynbee talks about the jaw-dropping arrogance of fat cats? This woman earns over £100,000 a year from writing her putrid shit in The Grauniad, let alone all of the other jobs and positions that she occupies (and let alone her shoddy fucking books).

This is a woman who owns a villa in Tuscany to which she frequently flies and still lectures the rest of us about our CO2 emissions; this is the woman who demanded that we throw open the books and see what everybody earns and then refused to disclose her own whopping salary; this is the woman who sent her children to private schools but insists that we should all send ours to state schools; this is the woman who demands that we pay more taxes and abase ourselves before the state, whilst ensuring that she—pulling down a salary beyond the dreams of avarice for most people in this country—has adequate funds to be able to buy her way out of the hellhole that she would construct for us.

This evil, rancid old hag, mincing about in her no-doubt hand-knitted cardigans, needs to go on a special journey and find herself a Fucking Clue. And taking a really long look in the mirror of Have Some Fucking Self-Awareness wouldn't go amiss either.

Shut your face, you hideous, hypocritical harridan: may you burn in hell for all enternity.

UPDATE: the book is called Unjust Rewards which is, of course, something that the talentless Toynbee knows all too much about. No, don't buy it: Timmy is going to read it so that we don't have to.

From her new book (which, yes, I have ordered, and I intend to provide a full guide to it in all it’s awfulness).

Mistakes such as these should disqualify … from pontificating about taxation or redistribution.

D’ye think that’s a stricture that Polly would be happy to live under herself?

Although he is presumably not going to buy it from The Grauniad...

So, what’s it like to be ripped off by a tax dodging, loss making charity that was deliberately set up to avoid inheritance tax then anyway?

Not too fond of her then DK

To be fair to the always-wrong Polly, just for once, she did write a barely reasonable book once, on living on low wages - and people bought it, even though the government didnt' make them. She does have a constituency.

But yes, it is dwindling every day. And for the past decade she has been wrong about every single fucking thing she has ever written about. And I see no prospect of that 100% fucking wrong record changing.

And the hypocrisy? Well the thing is DK, she doesn't think she *is* rich. All these london lefty media fuckers hang out together and assume their wealth is just average... I'm sure she's got an excuse to hand for springing for public schools too.

I feel sorry for her. I genuinely do. Face it mate, what would you rather be? Rich, famous, well-connected and invited to all the right dinner parties, but having been proved wrong about every single significant opinion you'd ever had in your entire life, or to be like me; poor but happy, and right about everything, always?

I hate her hypocrisy, but the gap is getting out of hand. Capitalism today - if we can call it that - is based on only one element of Smith's original.
I don't see much of his thrift.

if you think she is a bag of spanners, check out Jacqui Smith. Now this bitch fell from the ugly tree and hit every branch and leaf on the way down only to land in a steaming great pile of bull shit, coincidently that is what comes out of her mouth.

It doesn't matter if the living standards of the poor are rising more slowly than those of the rich; what's important is that they're rising.

I live in a working-class area in the north of England and only work part-time yet I have a roof over my head, a computer (obviously) and a HDTV, and have money to spare each month, although I'd be much better off if they didn't try to tax the fuck out of us all.

Would I like a private yacht? Yes, but never owning one isn't exactly going to be one of my regrets when I'm on my deathbed.

I don't mind socialists too much, as long as they honestly believe the tripe that they're coming out with. I really, really hate hypocrites, though.

Although I can see where frankfisher might have a point...

Tommy Sheridan takes only the average national wage and donates the rest of his salary to his party.

Wouldn't it be nice if Polly put her money where her mouth was and agreed to donate everything she earns above the national average to her beloved Labour Party? I think they could do with the cash...

Hypocrite does not begin to describe her.

The entire envy politics of moaning about salaries is so bankrupt. Unless the rich stuff cash into mattresses all their money either works for a living in a bank or investment, providing jobs, OR it is spent making other people wealthier and, you guessed it, providing jobs for others to pander to the rich person's whims.

Polly is such an utter moron, bereft of any rational thought processes in the area of economics. No surprise she is a Socialist.

The day these morons explain how taxing the rich more puts extra money in the pockets of the poor is the day I will listen to complaints about the wealth-gap.

Experience from all over the world suggests that the current 40% tax rate is about the cut-off point between people paying it and avoiding it, increase this rate and tax revenues will drop. This will hit the poor hardest.

Capital taxes like IHT don't benefit the poor either because very few estates are affected unless you put the threshold so low that everyone with a semi in Nuneaton gets caught. Do that and they'd never get reelected.

Not only is the wealth-gap harmless but there is nothing government can do to reduce it and benefit the poor. Mind you, if they had any intention of benefiting the poor they would increase the tax threshhold to £10,000, better still £15,000. Bugger-all chance of that, it would be far too fair.

Seeing her hatchet face is the worst part of this review of her shyte book.

' Timmy is going to read it so that we don't have to.'