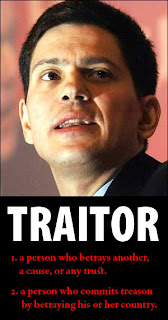 Few people in the entire annals of the sordid, stinking, corrupt, cowardly politics of this country can beat David "Batshit" Miliband for sheer hypocrisy and screaming, speccy evil. And, as you may know, your humble Devil is not completely keen on the devious, unpleasant little shit.

So, it comes as no surprise to find the hideous little shitbag bitching that Russia's actions in Georgia aren't completely above board.

Mr Miliband was speaking in Tbilisi after talks with the Georgian president Mikheil Saakashvili.

"Every day that goes by beyond the deadline of noon yesterday (Monday) is a day that we see Russia not living up to its word," he said at a news conference."

Of course, Mr Miliband, you would never dream of lying like a cunt, would you? You fucking cunt.

You, my dear Batshit, would never dream of promising a referendum on an international treaty—let's call it "the Lisbon Treaty"—and then using weasel words in order to wriggle out of said referendum, would you? You fucking little cunt.

I wouldn't mind your rampant lies quite so much, if you weren't such an incompetent turd. Your tenure at DEFRA was marked by the continuing fuck up of the CAP administration which has led to EU fines of some £350 million (minimum); this, in turn, led to the underspend on flood defences which led directly to the disastrous floods of a couple of years ago.

Despite his enthusiasm for personal carbon points, the tedious little fuckhead was utterly unaware of the advancements made in wave power.

Now this piece of rubbish—a man who believes that countries no longer indulge in "brinksmanship and powerbroking"—is our Foreign Secretary; supposedly this unpleasant little cuntrag is protecting our interests abroad. Actually, he makes us look useless, toothless and pointless.

Dear god, Miliband: I hope that you are swiftly removed from government. But I don't wish death on you; no, not yet—I want to pull the lever myself.

Sorry DK - you can't pull the lever on him. He's mine - he's destined to end his days sitting on top of a sharpened 8ft stake on the centre-spot at Wembley Stadium, with a crowd of 60K watching. Er ... that's after I've had the pleasure of punching his lights out. It's his face - it's just one of those faces that instinctively makes you want to smash it. He can't help that I suppose - but I can't help it either.

Tell you what, I'll give to a free ticket to watch. Will that do?

Sir Henry Morgan - Could you put it on YouTube for the pleasure of untold plasure of tens of thousands?

Broadcast live. With the sound of his whinges. And for as long as his naked thigh-grip can keep him up there.It'll still be worth being at the actual match though. It always is.

He is absolutely the most repulsive slug in modern world politics.

At least with cunts like Saddam, or that short-arsed twat in Iran, for example, you could/can have a sneaking regard for their up-front twattishness. But Militwat has not a single redeeming feature.

His brother gets the silver medal.

I think DK is just upset because Trixy wants to bang the bejesus out of the boy David.

Jealousy is such an ugly sentiment...

Do you think its time you removed the Libertarian Party Link and logo from your site?

Or maybe you would prefer to simply fuck off and die?

It's your choice -- which is the essence of libertarianism, of course.

Ah thats what Libertarianism is! Thanks Dee-Kay.

But it's not really though because they're not my choices, they're the ones you gave me so were you trying to catch me out about the essence thing?

I say that far from being a Libertarian at heart, you're the sort of person who cannot bare others views or actions if they don't comply with your own. It's everywhere on your blog,everywhere.

People like me are at liberty to disagree with you on subjects and then ....... STILL LIVE!

So please respond to me again, this time, as a real libertarian.

P.S. I still think you ought to remove the logo.

With so much venomous loathing of David Milliband, you can only be his mother!
I have never forgiven him for trying to pinch the teacher's pensions. he failed, but he is still hovering, and could swoop again.