Truism of the day

Via Timmy, this is a neat little essay. Here are a few highlights...

This is the situation as it stands on February 1, 2003: after nearly a hundred years of trying out the experiment called socialism/Communism/leftism, the verdict is in. It was a terrible idea. Every society that tried to implement it was the poorer for it. None developed a healthy economy able to lift its majority to that standard of living routinely enjoyed in the non-Communist industrial states. What's more, when it came to protecting individual rights and civil liberties, socialist societies shat dead rats.
...

These songs came almost to an end because they were so flamingly, obviously untrue. The Communist states did not surpass us in efficiency. The "ideal" they gave people to live up to appeared to be treachery, betrayal and oppression. Anybody with compassion for suffering humanity would definitely want to start alleviating that suffering by emptying the gulags.

Still, the music came only almost to an end. There remained pockets of true believers, and all throughout the industrialized and developing world, those true believers were to be found principally in two places: academia, and the media.

...
The anti-American left can go on screaming all it wants that it's for social justice, sustainable development, and the end of poverty--but it doesn't really care about any of them, and it is comprised of individuals who almost always truly hate and fear both the working class and the poor. If they didn't, they'd be more careful to get their facts straight about "globalization."

Yup, that's pretty much true, especially the bit about Lefties hating and fearing the working class. It's why they love the state, you see.

Because, if the state is there to sweep the human detritus off the streets, the Left don't have to be worried about being accosted in the street by poor, homeless people and being made to feel guilty because they are too fucking mean to give money voluntarily. They like the state's compulsory confiscation of money because it assuages their guilt about their lack of human charity and allows them to rest easy, knowing that everyone else is also being forced to hand over their hard-earned money to the Lefties' causes.

When people walk along the street these days, they see a homeless person and think, "why doesn't the state do something about homeless people/the mentally ill/the chiiiiiiiiiiilllldren?"

What they should be thinking is, "what can I do to help that person?"

The state dehumanises people: it separates them from their fellow human beings. And that is why the socialists like it.

I am so sick of ignorant people banging on about "the atomisation of society" and how it's all because of "capitalism" and our "materialistic society".

Have we evolved into more materialistic people at a genetic level? We have not. "Materialism" has been around for as long as humans have traded goods: we have always been acquisitive.

It is not capitalism or materialism that has caused our atomised society: it is statism. It is the "the state do something about that" attitude. And as society has become atomised, as people care less about and feel disconnected from other human beings, there are inevitable consequences. 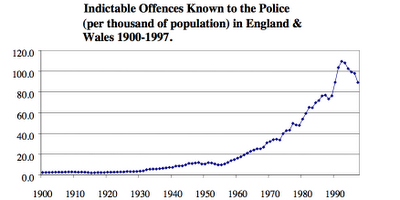 Perhaps you don't think that that shows an accurate picture? The definition of what is and what is not a crime does change all the time so you would have point. Literally thousands of things that where not crimes before now are, for example there has been one new crime a day since Labour came to power in 1997. So perhaps homicide rates would be better? There are fewer data, but the trend is identical.

So we are looking for something that had an impact on everybody in the country, but that affected the poor a lot more than the rich. something that happened just after World War 2 (the Home Office paper I linked to above dates it as 1954). Something big enough to change the very foundations of society.

I wonder what the fuck that could be...

It is one of the reasons why I am a libertarian: because I actually do care about the poor. I would like to be able to give money and know that it helps the genuinely disadvantaged, not keep some fat-arsed civil servant in a pen-pushing job or ensuring that some ignorant, corrupt cunt and his ugly wife don't run out of cream buns.

I am a libertarian because libertarianism lets people live life as they see fit (and, fundamentally, I am optimistic about human beings). You want to form a socialist enclave? Fine, no problem. As long as everyone does so voluntarily, then there's no problem.

You will still be poorer, more morally impoverished, more crime-ridden and more hag-ridden than the rest of us who want no part of your disgustingly immoral quasi-society. Libertarianism allows people to do as they see fit (as long as they harm no one else) and, as such, is the only truly moral political system.
By Devil's Kitchen at July 27, 2008

So the welfare state causes people to kill each other?

How do our homicide rates compare to those in other countries with similar levels of social security?

Wow, D-Notice, it's almost like you just copied and pasted the comment that you left at a referring blog without actually bothering to read my article!

"So the welfare state causes people to kill each other?"

If I were a sensitive chap, I would -- as a libertarian -- find that comment ever so slightly offensive.

No, the Welfare State does not "cause" people to kill each other: people are responsible for their own decisions and we should not attempt to mitigate their evil in any way.

However, as I believe, statism does atomise society, and separate man from man; once you empathise less with your fellow man, it is all the easier to kill him.

So, the Welfare State does not cause people to kill other people, but it does create an environment in which the emotional cost of doing so it less, and thus changing the cost/benefit considerations.

"How do our homicide rates compare to those in other countries with similar levels of social security?"

Well, here's a list of murders per capita for the 62 countries for which there are data. Looking at that list, I would say that we are about average...

Not Somebody Else's Problem said...

This post really hit the nail on the head for me - so far as "what can you do for your country/society.suburb etc?".

I started doing this about two years ago, but only started blogging about it back in April - http://notsep.blogspot.com

I'm not trying to save the planet - just fix a small part of our suburb. I thought for a while about what I could do, decided to ignore whales, trees, koalas and so on, and settled on the state of our infrastructure. After all, we spend 99.99% of our life putting up with crap roads, footpaths etc - why not try to do something about it, no matter how small and trivial? "Notsep" stands for "not somebody else's problem", which means if you want something fixed, you have to actually do something to get it fixed, not passively sit around like a beanbag waiting for "somebody else" to do something.

It also makes me feel good when I get one of our lazy local authorities to pull their finger out and actually do some work, which is a nice change.

What is ever so loathesome is to see those such as Polly jump ship like the rat she is so she can find another socialist, self-loathing bandwagon to lash herself to.

I think we've also found the solution to murder too: war...

I know I can get a bit mono-fixated on this, but one can interpret that second graph in another way:

Up until the mid-20's there were no (repeat: Nil, zero, zilch, nada) controls on the ownership of firearms by law abiding citizens. No need for licences, nothing.

Then, initially prompted by fears of socialist revolution, the state gradually introduced controls. Guess where the murder rate starts to tick up.

Okay, I'll admit this could be a case of confusing linked phenomena and coincidences; but you have to agree, it's a fun interpretation for baiting moonbats.