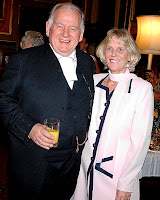 Two of the most corrupt people in the House of Commons—and that's fucking saying something, frankly.

Via Guido, this Times article very quietly (and, it must be said, with liberal use of hearsay) absolutely destroys Michael Martin, the Speaker of the House of Weasels Commons.

The man comes across as an absolute shit of the very first water, and as a man who has a massive chip on each shoulder—that of being Scottish on one, and that of being poor and uneducated on the other.

Martin is temperamentally ill-suited to dealing with the tempest caused by MPs’ expenses because he is stubborn and old-fashioned in his view of Commons procedure.

Martin is "ill-suited to dealing with the tempest caused by MPs’ expenses" because he is also mired in the scandal himself: Michael Martin is absolutely corrupt. He is, in fact, possibly the single most corrupt man in Parliament, not only because he has fraudulently enriched himself at taxpayers' expense (because all of them have been doing that for years) but because he has denigrated the office that he represents—he, rather more than anyone else (except, perhaps, Tony Blair), has contributed to the contempt in which the vast majority of interested observers hold the House.

It is entirely obvious from this article that the man has utter contempt for the traditions of the House and for the responsibilities and status of his job.

Yet Martin has seemed incapable of enjoying his prize. From the start he appeared convinced that colleagues and the media were doing him down. He annoyed traditionalists by abandoning the Speaker’s wig and tights. He struggled with procedures, and did not always appear to know members’ names when calling them to speak. He was surprised to be told he had to resign from the Labour party to preserve the Speaker’s historic neutrality, and did so only reluctantly. One former official suggests that the Speaker was not exactly a workaholic. Where previous Speakers had spare time to prepare for official receptions by reading up on the guests, Martin, the former official recalls, tended to disappear to his private suite to watch television.

In other words, Michael Martin is not only corrupt, venal, insecure and stupid, he is also absolutely fucking bone-idle. The man is, in other words, utterly unfit to hold the office of Speaker and, as this article makes clear, at heart a deeply, deeply unpleasant man.

In short, Michael Martin is a total cunt, unfit to hold a paid public office—something that he has amply demonstrated through his ruthless and greedy pillaging of the public purse.

Douglas Carswell is highly unusual, as an MP who has publicly challenged Martin’s suitability for the job and demanded he set a date to step down.

Good. As I have mentioned before, I like Carswell (despite his weirdly wonky face) and he has some radical (and very sensible) ideas, especially concerning local taxation. Further, the man has balls.

Michael Martin also has balls—balls of fucking steel. For who else, being in charge of the operation of the House of Commons, would have the sheer brass neck to illegitimately enrich themselves at the taxpayers expense knowing that they were in charge of ensuring that MPs did not do the same?

Michael Martin is, as I have stated before, a lazy, venal, corrupt and stupid cunt, and is married to someone who is quite possibly more so. The pair of them are a disgusting example of how our Parliamentary system facilitates the enrichment of those who deserve it least—that we pay these cunts one single penny (let alone a few hundred thousand, plus what they have scammed) says everything that needs to be said about the unsuitability of our democratic system.

In this situation, there is little that I can say that Cromwell did not say in 1653.

In the name of god, go! Let us raze the Parliament to the ground, hang every fucker in there, and start afresh. The whole institution is mired in corruption and it fails to serve the purpose for which it was instigated. Like the UN, it gives a disproportionately loud voice to the ignorant, the stupid and the corrupt—it must be ripped out and the whole edifice destroyed.

Our Parliament has failed to defend the people of this country—a function which, in an ideal world, would be its primary and, indeed, sole function. Instead it encourages authoritarian corruption—MPs are essentially elected depending upon who can most convincingly bribe the electorate (just one reason why those who do not pay tax should not be allowed to vote—and yes, I include off-shore millionaires in that prohibition).

As such, Martin is perhaps a suitably corrupt icon for such an unutterly corrupt institution. That does not alter the fact that he is a screaming cunt and should be removed from office. Or, of course, locked in his office whilst we burn the building around him.

Do you hear how joyous that music is? The only thing that V couldn't do was to ensure that 646 thieving, lying bastards were blown to smithereens along with the building.*

Jeeves, sharpen the cockroaches, excite the candiru fish and annoy the hornets! We have a Speaker and his wife to torture to death...

* I rather like this montage of V For Vendetta choreographed to a remix of Depeche Mode's Enjoy The Silence.
By Devil's Kitchen at July 27, 2008

It does get one going, doesn't it?

The man is a cocktrumpet (H/T The Reactionary Snob) of the highest order.

Are you saying that The Speaker is no better than Mr & Ms Darwin of Hartlepool?

While I hold no brief for the well balanced Mr Martin (a chip on each shoulder) do you not think that this inability to remember names/rules of the House etc could be due to something more deadly than ignorance i.e. the onset of Althzeimers or something similar?

Didn't Martin start as he meant to go on by ordering a massive redecoration of his private apartments all those years ago?