I have been meaning to post about this for a while, but the UK Libertarian Party now has an office in Second Life. It has been sponsored by one of our members and has been backed by another member, Tom Paine, who is something of a force majeure in SL.

Yesterday Bag and I had the idea of opening a UK Libertarian Party office in Second Life. "No sooner said than done, so acts your man of worth;" within a couple of hours we had clearance from the party's Director of Communications, I had identified premises, Bag had rented them and we had furnished and equipped the space in time for the Director's first visit... 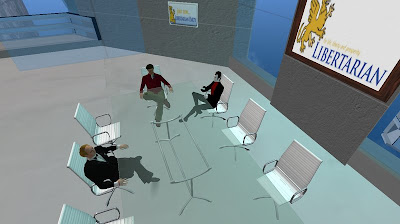 For those of you who are already SL'ers, this link will take you right there.

As I have said before, LPUK is a little bit weird. We came together through the blogosphere and are thus scattered all over the country.

This has meant that we have had a few difficulties in organising things in the real world; the fact that many of us in the—shall we say?—higher echelons of the party have never met (or only briefly), has ensured that we are also prey to the many misunderstandings inherent in internet communications. Things are progressing however.

However, because of the way that we have come about, LPUK also has a considerable number of bloggers scattered around and about. And our membership profile is pretty young and internet-savvy. So, maybe we shall see if we can't organise some meet-ups in the new office...
By Devil's Kitchen at July 20, 2008

Having heard of SL, but never having used it before, I'm desperate to check this out.

There are quite a few libertarians in SL already; the Free State Project has a lounge as well.

Being a 'pretty young and internet-savvy' chap myself, and a member of LPUK, this post made me laugh to no end DK =) Second Life is one of those amusing phenomenon folks such as myself watch, and chuckle at, as we go and play on far more amusing programs/games.

Certainly, I have never got into it that much (but then I don't play any computer games, really: too busy entertaining you lot!); it seems, actually, to be our... ah... more mature members that enjoy SL the most...

Well, I'm in; despite having to adopt an extremely silly name to do so...

The only reason that libertarians are over-represented in SL is that SL is full of fucking furries, who tend towards libertarianism because they realise that the Harm Principle is the only thing keeping those disgusting perverts off the bonfire.