The continued silence on this blog is, I know, uncharacteristic. However, this weekend it was justified, as I drove out into the rolling Wiltshire countryside to partake of fine beers with The Englishman.

I drove straight from work on Friday and arrived at the Englishman's castle, in the middle of nowhere (but in a good way) at about 9pm, whereupon we almost immediately repaired to the pub to drink several pints in swift succesion.

The next morning entailed an early start (to the drinking, in my case), as we partake in the Grand Chilli Cook-off in front of the pub. Although I had strenuously maintained that I would not be cooking, I was nevertheless persuaded to stir the chilli from time to time.

Your humble Devil was surely the only person in the history of time to cook over a barbeque in a suit, evidence of which can be found over at the Castle. 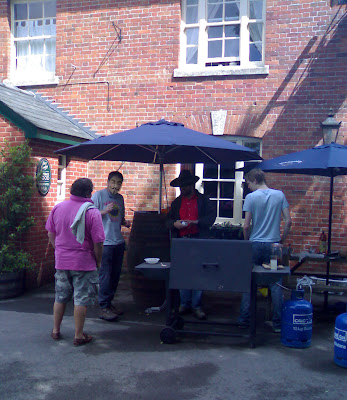 Here, you can see the Englishman modelling a rather dashing red shirt and funky hat whilst commenter NBC looks on (face obscured by request).

I'd stear well clear of chillis. They do terrible, long-term things to your lower bowl.

My dear Devil , I wonder why we bloggers choose to wear large trilby type hats .... do we have something to hide or are we just extroverts ?

Well done to the Englishman for not letting you ruin his chilli. I can't recall you ever cooking something for me without damaging it in some way.

Although you are very good at sorting the drinks out.

DK, if you ever need a John Belushi shaped guy for a Blues Brothers spoof, I'm your man!

Re Mr Doctor's question ... I wear a broad-brimmed trilby to keep my ciggy dry in the rain.

I saw the pictures on the Englishman's site. Looks like a good time was had by all.

I'm more of a Stetson chap myself though.