Now, it seems, there are not only LOLcats but LOLdogs too. 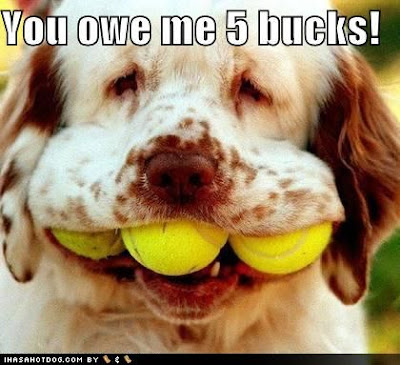 This is a Clumber Spaniel, and our family had two of them in succession. And Clumbers do, indeed, enjoy collecting tennis balls in their mouths—don't ask me why. If I recall correctly, our first Clumber, Backhouse (pronounced like Bacchus), reached a record total of seven tennis balls in his mouth at the one time.

As Queen Victoria noted in her diary, "They are such dear, nice dogs" but they do tend to have some health problems—hip dysplasia, in particular—caused by inbreeding, a situation exacerbated by their relative rarity.

They are lovely animals though and, as pater Devil once said, they are "such noble-looking dogs". Mind you, pater Devil also noted that the pet insurance was the only policy he'd ever had that paid out more than he'd paid in...
By Devil's Kitchen at July 27, 2008

I have a springer spaniel.

It is a complete cunt.

Seven tennis balls my arse. Ever seen a springer trying to drag an ostrich through the cat flap?