Praise be! It seems, as Guido briefly reported on Wednesday, that Wendy Alexander was found guilty of fiddling donations to her leadership campaign. Both Guido and your humble Devil happily published this letter in December, which appeared to screw the stupid cow's denials completely... 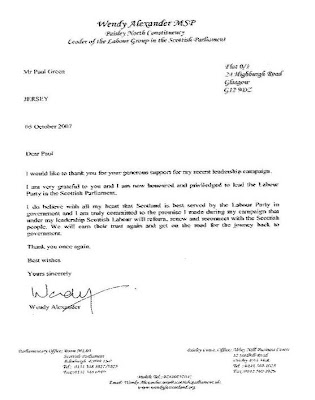 Your humble Devil also reported that The Sunday Herald had obtained a highly damning MS Word document that listed her donors and flagged one of the impermissable donations.

Now it seems that, having been found guilty of being a unprincipled, corrupt hypocrite and shameless liar, Wendy has fallen on her sword (though not, alas, literally).

There's no regret at this end, love, I can assure you. Fuck off into mediocre obscurity, you bitch.

It came as she faced a one-day ban from Holyrood after failing to register donations to her leadership campaign.

Ms Alexander said she had acted in "good faith" and on the written advice of the parliamentary authorities.

Yes, yes, we saw this argument when your fat friend, Jackie Baillie, attempted to defend your honour on Newsnight. Not only is breaking the law unintentionally not a defence, but the evidence made quite plain that you knew—or, at the very least, strongly suspected—that what you were doing was illegal.

She accused the SNP of waging a "vexatious" campaign against her, without regard for the damage it was doing to the Scottish Parliament.

Oh, fuck off, you stupid little bitch; the person who was doing damage to the Scottish Parliament was you.

You broke the law.

You kept putting up piss-poor defences.

You continued to lie.

And—I shall say it again—the only person that is responsible for damaging the Scottish Parliament, in this case, is you, Wendy.

There will only be one person who will be upset to see you finally fucking off, especially since he thought that this scandal was all over... 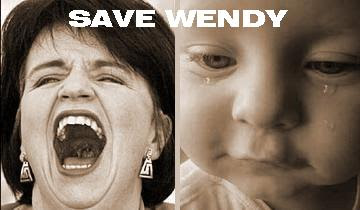 Yes, I have just had the poor little Greek boy on the 'phone, sobbing his little eyes out*; not only has Wendy had to resign but he himself is not in the country to comfort her (and maybe get a little comfort himself, if you get my drift. Nudge, nudge, wink, wink...).

Mind you, even my impecunious Athenian friend admitted that Wendy was treading on thin ice when she advanced the idea of an independence referendum.

The capacity of this government and its acolytes in the North for serially screwing things up is hilarious to watch. Already on its knees, it's an open question how many more of these self-inflicted wounds it can take before it expires altogether. But this is the break-up of the United Kingdom we're talking about; these pathetic internecine squabbles have consequences that will reverberate long after Brown and Alexander have returned to a richly deserved obscurity.

The fragrant Wendy has made a right balls-up of this entire affair, and politicians and columnists are now openly calling for her head. We may be very close to a tipping point for her "leadership", such as it is, and once that is reached, not even her biggest fan in the blogosphere will be able to save her.

Still, never mind, Mr E; I'm sure that Wendy will now have the odd empty hour to spend with her minge: maybe you could help her fill it...


* This may not be entirely true. Although I did send him a gleeful text and his reply was somewhat incredulous.**

David Marshall, Labour MP for East Glasgow, is stepping down for health reasons. That's understandable. Being a Labour MP isn't healthy at the moment.

So Gordon has another little election to deal with. I've no idea what Glasgow East is like, but I have to wonder if Labour are about to lose out to the Buckfast and Pies party. They'd better get campaigning, the Monster Raving Looney party nearly caught them last time.

At this rate we won't need a general election. It's more fun to pick them off one at a time.

Expect to see many more NuLabour MPs retiring on health grounds and to be spending more time with their money etc! Its obvious to a blind man that no MP will want to fight the next election only to come behind the BNP and monster raving loony party(green party)! That would kill any hope of future employment and help prevent them being laughed at in the street? Oh yes there will be plenty more taking the generous sickness payoffs etc! Still it might be fun to watch the queue of rats jumping off the fast sinking SS GORDON ARSEBANDIT McPOOFTA WEIRDO!

Was Wendy Alexander actually on trial for anything? If not, she hasn't exactly been 'found guilty'. Still, I agree entirely that it's her fault, and she should have been more careful even if it was a mistake.

CAREFUL!?!... I think you should kindly modify your name to...

Though I expect nothing less...!