In the comments to my last post, zeno points out that someone over at Guido's recommended that we should send a single white feather in the post to Gordon Brown.

The single White feather as a symbol of cowardice comes from cockfighting and the belief that a cockerel sporting a white feather in its tail is likely to be a poor fighter. Pure-breed gamecocks don't show white feathers, so its presence indicates that the cockerel is an inferior cross-breed.

This is an idea that I like. A lot.

Gordon Brown has cowardly shied away from fighting public elections, from seeking any popular mandate for his rule—he bottled out of a general election, denied us our promised referendum on the EU Constitution and has now refused to stand a candidate in support of his consistent assaults on our Ancient Rights and Liberties. Since he has denied us a voice at the ballot box why not show our Prime Minister what you think of him? Send him a single white feather in the post.

This is a most amusing idea, I think. Simply find a white feather, pop it into an envelope and post it to: The Prime Minister, 10 Downing Street, London SW1 2AA. 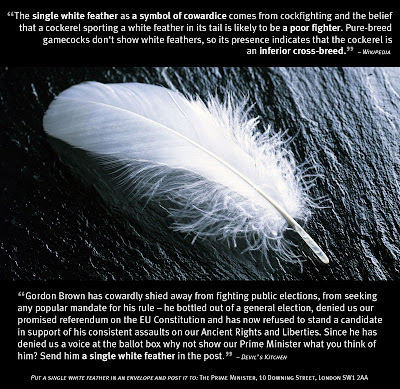 And feel free to display this image on your blog: let's spread the word. Only 21.6% of the country voted for NuLabour at the last general election, and no member of the public has ever voted for Gordon Brown as Prime Minister; we could get a lot of feathers delivered. Let's make this bigger than the Ban Darling campaign!

I like to imagine Gordon, in the coming weeks, opening hundreds of envelopes over his breakfast—each one containing nothing but a single white feather.

Slowly the madness mounts as he frantically tears at the next envelope and the next and the next—though he knows what each one will contain, he cannot stop himself. His eyes become wilder, the tick in his jaw works harder and slowly he becomes surrounded by thousands—millions—of white feathers.

Brown's increasingly frenzied twitching as he opens the envelopes sends the feathers whirling into the air, landing where they will—in salty porridge, cups of tea; nestling in hair and lodged in pockets; covering the carpet and twirling in the sun streaming through the windows...

And finally, the police officers outside 10 Downing Street look at each other in shock and then spring into action as they hear a final anguished scream...

UPDATE: Raedwald points out that it may not be that easy to get hold of a white feather, so many thanks to the commenter who pointed out that you can buy some magnificent ones here. Why not buy a pack and distribute them to your friends...?
By Devil's Kitchen at June 14, 2008

This tickles my fancy

has anyone a good supply of white feathers and an ebay account ?
there's a marketing opportunity here for someone that could forward the buyer's feather and comment to the PM..... or do it for a good cause ...any surplus money to Stuart Wheeler's fighting fund.
It would be good if the feathers were from the farmyard type of gobbler... the turkey.

I'll be on the lookout for one this evening, and hope to get it into the post before sending of feathers to No. 10 becomes classified a terrorist offence due to the possibility of H5N1 infection.

Isn't the white feather primarily known for being the tool used, mainly by those who didn't have to fight, to pressure people into signing up for first world war?

With such a distasteful history, it's probably not the greatest symbol to be used in a libertarian campaign.

It was given to some, including conscientious objectors, as a symbol of cowardice in both World Wars, yes.

However, it's origins as the symbol of such rather precedes that.

Further, there is nothing unlibertarian about showing your distaste for people's actions. You might have noticed that I do it quite a lot on this blog.

P.S. Besides, who said anything about a libertarian campaign? This is a campaign to show disgust for Gordon Brown and his contempt for democracy.*


* I feel that I should also point out that there is there anything inherently libertarian about democracy.

As I recall, the film used the white feather as a symbol of cowardice there too, where the 'hero' refused to fight, so the context in Brown's case is appropriate.

Of course Brown, like the hero in the story, could redeem himself by carrying out acts of courage and sending back the feathers.

I'm sorry, but feathers alone, no matter the quantity, are useless without a liberal [sic] application of tar to make them stick.

Sheesh... do we Yanks have to show you Brits everything?

Love it - I've added a new bit to LabourFailures in support.

Also, if you're struggling to find feathers, you can buy them for 11p each here: www.ostrichesonline.co.uk

It's not just that he has no prime ministerial mandate from the people of the UK as a whole. Issues like 42-days internment were not in the Labour Party Manifesto, so many will not have realised that they were ushering in an age of totalitarianism.

And on matters devolved - health, education, housing - he has absolutely no mandate whatsoever because the electorate in Scotland elect an MSP to represent them on those issues.

So all these "Eco-Towns" that he wants to build in England (and you will notice that they are only in England) are, frankly, none of his damn business. Neither are schools, or hospitals, or culture (ie Britishness), or planning, or transport, or agriculture and fishing, or sport. Yes, sport, even though he does like to turn up to England matches to put the hex on our teams.

He's a one eyed-trouser snake with no mandate over England. Yet he will be repealing England's Magna Carta (which he - deluded Scottish fool that he is - believes to be British):

"For there is indeed is a golden thread that runs through British history of the individual standing firm for freedom and liberty against tyranny and the arbitrary use of power. It runs from that long-ago day in Runnymede in 1215 to the Bill of Rights in 1689 to not just one, but four Great Reform Acts in less than 100 years. And the great tradition of British liberty has, first and foremost, been rooted in the protection of the individual against the arbitrary power of first the monarch and then the state." - Broon

Forget about the feather, send him a shit in an envelope (if you're not on the DNA database).

White feathers surely easy to get hold of: find out where your local urban or suburban fox lives and then wait until he kills something by decapitation that has white feathers.

Or wait for 'ladies' day at Royal Ascot. There'll be loads of vile hats with feathers in?

I'm off to pluck our cockerel. Wish me luck, he's an evil bastard.

"it's origins as the symbol of such rather precedes that"

I still find the idea of using the white feather slightly distasteful, but that's probably just me.

Best of luck with the campaign.

get down to your local park pond you all should pick up some feathers for free.

is there a site where we can register our sending of the broon feathers?

Heh, I wonder if he would get an arse hole squeeze if someone sent him a boonie hat with a single white feather in it.

That was my idea - chucked it out on Cif first and then tarted it on Guido.

Of course, we're all on the same side and all that,a nd it's the campaign that's import, but, even so, MY IDEA!!!