You fucking bunch of totalitarian arseholes.

May you fucking rot in hell without trial, you evil fucking bastards.

She said: "No government minister should have the power to allow police to lock people up for six weeks without charge."

Similarly, Shami Chakrabarti, of civil liberties group Liberty, said the Lords would be called upon to act as "the guardian of fundamental rights".

Yes, once more we will have to rely on those unelected Lords to serve us and protect us from the depredations of a totalitarian fucking government.

Fuck you, Brown. Fuck the fucking lot of you who voted for this measure (including, of course, UKIP's Bob "cock-face" Spink). How dare you sign away our hard-won freedoms? Not only is 42 days disgustingly illiberal, but now it's Parliament—the fucking Executive—who get to decide whether someone should be held. Parliament should be bound by the fucking law.

But as we have consistantly seen—in everything from the constant increases in detention to the lack of prosecutions over mistaken fraudulent expenses claims—our MPs view themselves as being above the law. They are fucking scum, the fucking lot of them.

We must draw up a new Bill of Rights, a new Magna Carta Libertatum: it is no longer the monarch who threatens our freedoms, it is our Parliament.

It's time for a revolution; it is time to storm the Palace of Westminster, and to drag our MPs, kicking and screaming, from their comfortable taxpayer-funded offices. We should strip them, beat them and laugh as we hear the bones snap.

We will then force every, single cunting MP to sign this new Bill of Rights and then we will hang them outside the Tower of London, leaving their bodies to be picked clean by the crows, rooks and ravens.

We will hang all of them apart from Gordon Brown; him, I am personally going to stab in both eyes and then slowly tear the flesh from, with a cheese grater, over the course of several, excruciating days.

Fuck you all, you fucking scum.

UPDATE: The Nameless One is equally incandescent.

But I'm not going to gripe about the government bribing people with the taxpayer's money too much. We should all be fucking used to that by now. Rather, my complaint is against every single fucking MP who managed voted for this. Those Nu Labour whores, the ironically named Democratic Unionists, that short, fat testicle of a woman Anne fucking Widdecombe - they are either brazenly corrupt, staggeringly naive or terrifyingly stupid.

Or, thinking about it, all of the above.

There is no excuse for this; none whatsoever. Parliament has handed yet more power to the state, and this power is wide open to abuse and will, I don't doubt for a second, be abused by someone somewhere some time soon.

For so it has come to pass that in this once-free and once-proud nation, the Leader (who looks rather like Stalin but fatter and without a moustache) now has the ability to lock up anyone, at any time, for six weeks without even telling them why. He has no need to explain this action. After six weeks, if the poor prole is released without charge, he will be compensated.
...

The compensation only applies if the victim is released without charge. All that's needed is a charge, any charge, a silly charge will do. A charge of wandering around in purple polkadot underwear is sufficient. Is that illegal? Well, we've had 3,000 or so new laws in the past 11 years and I have no idea what they are, so maybe it is.

Once charged, even if the charge is later dismissed, the victim has not been 'released without charge' so gets no money.

In essence then, the police can now take you off the street with no explanation and put you in a cell for six weeks. They don't have to tell you—or anyone else—why.

And A Very British Dude, in a post which you should read the whole of, looks beyond this legislation.

Despite a Likely Government victory on the bill this afternoon, it won't get through into law because:

This will allow the Government to abolish the remaining checks and balances in our system as "undemocratic". This will be sold to the Sheeple as "modernisation" of the constitution. If the Irish fail to do the right thing tomorrow, he might as well do away with all that tiresome election nonsense and change the British Flag to This: 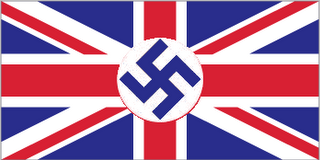 which is what the last person who tried to unify Europe wanted. Jim Sheridan (Labour member for some godforsaken inner-city toilet North of Hadrian's wall) let the cat out of the bag by saying openly that 42-day detention will only affect brown people not "hard working BRITISH families". So that's aright then... Despicable dogwhistle stuff.

I fear that Jackart is correct: we haven't seen the end of the rape of our liberties.

UPDATE 2: via the ever entertaining Harry Haddock, here's a fucking moron on the BBC's Have Your Wank Say...

These suspected terrorists are evil and should not be part of our society.

The 42 day period is too short and should be indefinite.

Well, Mike, you are an authoritarian fucknut and I don't like your views. So, what I am going to do is to spread a lot of rumours about you being a terrorist and get you locked up for a few days. Well, 42 days, to be precise.

Stick that in your pipe and smoke it, you utter cunt; fuck you and the five people who recommended your comment.
By Devil's Kitchen at June 12, 2008

Letters From A Tory said...

Not a good day for anyone to be a member of UKIP.

Anyone who thinks this will not get past the courts is mistaken. The HRA gives the courts the power to put wave their hands and say it breaches the HRA, but not the power to strike down the legislation.

They are coming for all of us. Arm yourselves.

I know I keep saying this, but Revolution is our only remaining option.

Come to the Sightseeing Trip, 28th June, Parliament Square, at about 1pm.

I will be taking photos of Westminster and possibly being nostalgic about how we used to have a Government worthy of the name.

If you care to join me, that would be super. No banners. No slogans. No chanting.

This is not a protest. This is a Revolution.

I am the Revolution and I want my fucking country back.

What LOAT says, a bit disappointed I am.

we will hang them outside the Tower of London, leaving their bodies to be picked clean by the crows, rooks and ravens.

Couldn't we just nail them up without the 'hanging' part? The dying-of-thirst-and-then-being-picked-clean bit is much more fun to watch, plus that way it takes longer so everybody can join in the fun.

Wouldn't want to upset the natives

The most fucking depressing thing of all though is that something like 69% of the population of this country have been taken in by all the terror propaganda. I thought Britains who lived through the troubles emmanating from NI would have more backbone.

This country is FUCKED.

I have decided not to renew my UKIP membership and have now joined the Libertarian party.

I could never support a party that would vote in favour of such a disgusting piece of legislation.

Lest we forget those two academics in Nottingham who were arrested for prevention of terrorism because they downloaded something of a US government website, and were subsequently released without charge six days later.

One of them is still locked up and has been for the last three weeks.

Its not really about terrorism is it?

Yes, UKIP have disgraced themselves.

Now, if it wasn't apparent before, there is a clear dividing line between the ideals of UKIP and those of the Libertarian Party.

I'll admit, I don't agree with some of your views, although I do consider myself at least partly libertarian on some causes, but you are completely right on this.

I have the greatest respect for the 306 who voted against it, regardless of their reasons, they at least support our liberties to an extent.

I bet my bitch of an MP (I will leave her unnamed, but she is a real Labour frontbench cocksucker, yet has never had a position in it. Thank fuck). Yet despite living in a town with a considerable ethnic population, I bet the dried up old hag will still be voted back in.

Whisper who dares... Mike Townend of Neasham could be a terrorist. He might not be of course, but he could be. Let's lock him up and find out shall we?

Oy plod, that bloke over there. Yes him. The one with the beard that is slightly longer than is fashionable right now. Yes him, next to the woman disguised as a post office box, he looks like a terrorist. Let's lock him up and find out shall we?

Of anyone needs locking up to protect the general public it is that Scottish cock weasel that persisted with this legislation in the first place.

AND NOW THE FUCKERS WANT TO ABOLISH THE TREASON LAWS!!!

Feet first into a thresher, I don't think so. Into a pit of vipers that have been genetically modified to produce neurotoxic venom that kills ever so slowly.

I hope the republic invades ulster and nails these self serving protty god botherers to a tree just like their fucking savior.

At least the Daily Mash can find something to laugh about:
http://www.thedailymash.co.uk/index.php?option=com_content&task=view&id=1015&Itemid=59

"Shadow home secretary David Davis has resigned as an MP.

He is to force a by-election in his Haltemprice and Howden constituency which he will fight on the issue of the new 42-day terror detention limit. "

If the thought police have any sense they'll be round to have a quiet word with DK, Old Holborn and Wat Tyler shortly.

Six weeks should be long enough for them to find out that Libertarian thought and expression represent a much greater threat to the state than any Islamic extremists!!!

Once they explain to the public that the criminals were caught plotting to undermine the democratically elected Government of the UK including encouraging people to carry out evil actions on the Prime Minister's person, opinion polls will show overwhelming backing for increasing 42 days detention to an indeterminate time period.

Sorry, but that's not far from where we are. I'm going to Spain or somewhere.

pagar, the sooner you fuck off, the better.

Even Steve Richards has taken his head out of Gordon's arse long enough to express his disappointment. I hope the sunlight doesn't damage his eyesight.

As a UKIP member, I'd like to see some action taken over Spink's vote on this issue.

There is a UKIP policy on this issue, and he hasn't followed it. I've already read a few people saying that they're not renewing their membership over this.