XP is the new Vista. Or something 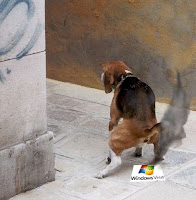 Fake Steve Jobs draws my attention to the continuing hilarity that is Microsoft's upgrade patches.

Owners of some AMD-based computers are finding that the move to Windows XP Service Pack 3 has sent their systems into an endless reboot cycle.

"While the root cause of this issue is complex, it results from OEMs improperly placing a Windows XP image created for an for Intel-based computer onto machines with non-Intel chipsets," Microsoft said in a statement. "Microsoft issued guidance to OEMs advising them to only load Windows XP images onto like hardware in 2004."
...

The reboot cycle glitch is the latest hiccup for Microsoft with the service pack update. The company had to delay the release of the XP update after discovering at the 11th hour an incompatibility with one of its own programs.

With that issue, customers running Microsoft's Dynamics Retail Management System could face data loss if they run that program in conjunction with SP3.

Right, I think that I'm OK now. I... oh no... Aaaaaaaaahahahahahaha!

I'd love some Mac awesomeness. Except for one thing...

Well, even if you do not decide to run Windows on your Mac (through Bootcamp or through an emulator, e.g. Parallels), we will have Gears of War soon...

Vista had one wonderful effect you forget to mention. It was so unbelievably crap, so bug ridden, so slow, so full of inexplicable driver clashes...I won't drone on

...that I bought an iMac. Hasn't crashed once yet.

Same here, worked for me and hubbie, we shall never return to the blue screen of death :-)

If people are stupid enough to invest in a Microsoft product then they deserve everything they get.

Pah. Fucking Apple fan boys. Vista _is_ shit, but both of my housemates have Leopard and that too is a half-baked pile of turds. Thank fuckery for linux.

PCs have users. Macs have captives.