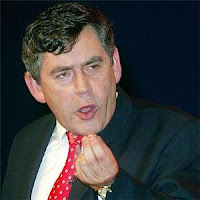 It has taken ten of hours for me to stop laughing at NuLabour's absolute fucking kicking at the Crewe and Nantwich bye-election, when their turkey-necked toffee-nosed liar presided over a substantial swing to the Tories. Whilst I hold no candle for the blue-rosetted bunch of lying cunts, it has been delicious seeing NuLabour get a good un-lubed seeing-to.

But now people are speculating that Gordon Brown cannot continue and, indeed, his position looks pretty darn rocky. But let's face it, in order for the dour Scots cunt to be forced out, someone is going to have to challenge him for the leadership—and who the hell is stupid enough to do that?

NuLabour are up against it; they have spent money like a drunken sailor on ten years shore-leave and now, as the economy takes a downturn, there's nothing in the kitty. Far from "putting an end to boom and bust", the Gobblin' King has (like most previous Labour governments) bankrupted the country.

Even the sheep that make up the general British population are starting to wake up to the continual assaults on their personal freedoms—especially as the state cracks down harder on their past-times, i.e. booze and fags—and there are mutterings of rebellion even in "safe" Labour seats (as we have seen).

Challenging to lead the Labour Party at this stage would be like volunteering to eat a turd sandwich: it going to be deeply unpleasant (and possibly dangerous) at the time and afterwards you are never going to be kissed ever again.

Your humble Devil reckons that no one will challenge Brown and he will limp on until either he reaches the end of his term. No one in the Labour Party will force an early election: they know that many of them will lose their seats and those in most danger will now dedicate their remaining months in Parliament to filling their boots from taxpayer funds and lining up cosy sinecures to keep them in champagne after they are forced from office.

The whole situation would be unbelievably entertaining were it not for the fact that they will probably manage to do an awful lot of damage before they are finally beaten from their cosy Westminster Village.

Oh yes, and the shits who will replace them will be little better...

DO YOU NEED US TO CALL YOU A CAB? BRITAIN ASKS BROWN

BRITAIN last night told the prime minister it was getting really quite late while making a big fuss of cleaning up the living room.

As Gordon Brown started yet another story about meeting Bono, Britain put its hand gently on his back and laughed saying, 'well that's just great - did you have a coat, by the way?'.

But despite Britain's wife collecting the empty glasses as noisily as possible, Mr Brown continued to sip slowly at his white wine before suggesting Britain put some more music on.
...

Britain has now spent the last two hours looking at its watch and pointing out that it has to be up at 6.30.

I agree, Mr Kitchen. The Tartan McReich's Führer is in for the duration. We can expect a new New Labour project and a firm guiding hand on Gordon's shoulder. There may be the pretence of a challenge but only with the intention of bringing him to heel.

It is in no one's interests (no one in the Labour Party) to overthrow the bastard.

Interesting point. I agree that nobody would want to take charge of the current mess, but would that reticence be confined to labour's drooling Borg?

Might we see, at the next general election, the spectacle of the main parties doing their best not to win?

In Cameron's shoes, I'd be looking at what he's likely to be lumbered with and wonder if maybe it might be best to pass on that turd sandwich this time round.

After all, he can't really fix very much. The EU won't let him.

The next government might well be composed of those who least appreciate the depth of the crap we're wading through.

Even the Monster Raving Loony party might balk at the prospect of power.

Leg-Iron makes valid points, as ever. I do wonder whether the Tories threw the 2005 election for exactly that reason, and maybe why the Goblin King postponed the 2007 election ... for fear of winning.

Anyway, getting back to personal freedoms, there's a fun online poll going on at LabourHome, which at the time of posting is going ever so marginally in favour of less bansturbation.

I so agree with you. Gordon's supporters are digging their heels in. Here's Antonia Bance, Oxfam's deputy director for the UK Poverty Programme, expressing her undying love for the Labour Party (talk about a conflict of interest!!): "In three terms in government, we have quietly done well on fairness - for older people, for families, for children, for workers. Like making sure that ordinary people feeling the pinch from high living costs - not least food, energy and fuel - get more help from a government that is on their side... It could even mean - whisper it quietly - a windfall tax on energy companies and a new rate of tax for the super-rich....Don’t be fooled into thinking that the Blairites have the answers....Whatever answers the Blairites may have had (and in their time they had a fair few), they don’t have them any longer if this is the best they can do...Along with the vast majority of Labour members and supporters on the centre-left, I do want us to talk about why we’re involved in politics - and fairness is it. We have a vision of a more equal society, where people work hard and aspire, and are supported and protected by government. I want us to remind the Labour coalition - of working-class voters, lower middle-class voters, middle-class voters, BME communities and liberal lefties - what they’ve gained, what is still to come, and what they could lose... I’ll be out on the doorstep tomorrow morning, and spending a large chunk of this week coming working for more playschemes, better play areas and a living wage in Oxford as a Labour councillor. I’m still proud of my government and my party. What are you going to do this week to help ensure a Labour government?"