Nadine Dorries: not only a liar, but a self-pitying waste of space 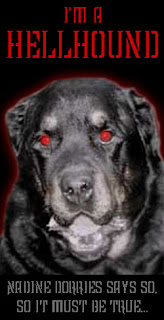 If you are one of the evil "Hounds of Hell" pursuing Nadine Dorries, why not display this badge of pride shame on your blog?

Both Tim Ireland and , in particular, Unity have pulled apart the latest whining load of old bollocks from proven liar, general thicko and all-round nasty piece of work, Nadine Dorries (do you think that her daughters are ashamed yet?); since her pathetic excuse for a blog doesn't have proper deep linking, here is the latest bullshit in full.

The Hounds of Hell are chasing me.

We received another unpleasant parcel in the post today. Nasty web sites set up...

Really, Nadine? Show me the money! Or, rather, a link.

How unusual for an MP, eh?

people crawling all over my expenses, which they are entitled and I am very very happy for them to do...

Yes, because the word "crawling" has such positive connotations in this context, does it not?

What? Like, "Nadine: this is the truth calling. I'd just like to..." [Nadine slams down the receiver.]

A message smeared on my window.

This is all meant to destabilise or distract me.

Or, alternatively, drive you to suicide, which would be a far more satisfying outcome.

Mind you, I should point out that I have not been doing nasty things; I did consider sending her a turd a box, but I decided that she simply wasn't worth the effort.

I have a very clear message to those who are attempting to do this—back off. You will not stop me, you will not undermine me, you do not scare me. In fact, you make me much more determined than I ever was before. You give me strength.

And you give me strength, Nad. Well, not you precisely; it's just that every time that I read your crap, I end up yelling, "god! Give me strength!"

I received a lovely email today from the photographer who took the picture of Samuels’s hand reaching through his mother’s womb during the operation when he was 21 weeks gestation.

The picture below is of Samuel giving evidence to the US congress five years later.

God! Give me strength! We've already been through this, Nad; Samuel did not reach through the womb because the fucker was anaesthetised! Through placental transfer! The surgeon in charge who was performing the damn operation has denied that anything of the sort happened! You stupid fucking bitch!

I have been on pins and needles trying to keep up with the vote there in the UK….I would love to know if the attempt is successful…"

I think that it was very nice of Michael to feel "honoured" rather than insisting that Nad had infringed his copyright.

Anyway, back to the main attraction.

I will Michael if I survive long enough!!!

Well, I think that the obvious answer to this is that we hope that you don't but fear that you will. Oh well, one can't have everything. Although, I wonder how much it would cost to send Nadine a stout hempen noose through the post...

As a final aside, one should note that Nadine Dorries maintains that she only supports a reduction to 20 weeks. This, too, is a lie.

Via Unity posting at Liberal Conspiracy, I notice that Nadine Dorries—campaigning vigorously for 20 weeks because of all of that compelling research which says 20 is juuuuust right—has also signed up to support an amendment for 16 weeks.

Perhaps someone would like to ask her which bit of her own argument for 20 weeks which was so unconvincing.

Quite. But it also seems that even 16 weeks is too much for Nadine.

Then here's Dorries from last October (via Unity).

You are right about one thing, I do want to go lower than 20 weeks—I would settle for the European average of 13 weeks, but would prefer 9.

It's also helpful to remember that she allies herself with those who oppose all abortion on principle - and that she's made no attempt to distance herself from those hardline views. Oh, and there's also a post at Conservative Home, arguing for "20 weeks not 22 weeks" which conveniently omits to mention that she's signed up to support 16 weeks but would prefer something much, much lower. Pick a number, any number?

Is there absolutely anyone out there who can possibly believe that Dorries is in any way sincere, consistent or believable when she talks about her beliefs about abortion?

'I did consider sending her a turd a box, but I decided that she simply wasn't worth the effort'.

You literally couldn't give a shit? Hardly surprising... :)

A dilemma: you have Nadine Dorries and Tamsin Dunwoody in front of you but only one bullet in your gun.

Which one do you shoot?

And which one do you beat to death with the butt of the gun?

I saw her and the rest of the sky fairy brigade on Dispatches last night. Disturbing group of loonies...

DK, for goodness sake if you feel that strongly report the bloody woman to the Parliamentary Commissioner, the Conservative Party's disciplinary body and her constituency party. There is no point fulminating on a blog that no-one in a position of authority, and able to do something about Ms Dorries, is ever going to read!!!

Yup, it's staying at 24 weeks. Chalk one up to those hounds.

It should be zero weeks. Abortion is a vile crime. It is conducted as a sham decision, requiring two medics to claim that without it the health of the mother is at risk. Mostly this is a lie and the pregnancy is merely inconvenient. This is the general reality.

Whilst there are compelling reasons such as rape, incest, severe foetal abnormality and immunological incompatibility, these are very small compared to the large number of abortions conducted every year. Most are conducted by special interest groups rather than the NHS.

"... the pregnancy is merely inconvenient."

Hmmm. I think that any pregnancy is something rather more than "inconvenient". Having a child is not a light matter and I seriously fucking doubt that anyone has an abortion lightly either: it really isn't the most fun process.

"Most are conducted by special interest groups rather than the NHS."

I'm sorry, but would you care to name those special interest groups? I mean, those that are not paid by the NHS to perform the abortions?

And how is the NHS not a special interest group? Because it's state-run?

And who gives a fuck who is carrying out the actual procedure: it is, presumably, the mother who wants it done.

If the abortion rate were reduced to zero weeks, the only special interest groups performing abortions would be using a rusty fucking coat-hanger...

The rusty coat hanger back street abortionist scenario is often advanced as the only alternative if abortion was illegal. This was not the case in the Irish Republic. There will always be places where it is legal.

Special interest groups...........the one that springs to mind is Marie Stopes International. A move beyond contraception of course.

The mother indeed wants it done and most are given counselling and so on, but what is rather concerning are those women, growing in number, who have had multiple abortions. When it becomes routine such as this it does rather prove my point that it is for convenience and not for real medical reasons.

Of course having a child is a very important issue and so is destroying one. A great many women do regret having the procedure.

My opinion is that the numbers should be scaled back and terminations should only be performed for bona fide medical reasons. I am concerned that the UK is being represented as the 'abortion capital' of the EU.

It is simply not true that we are the abortion capital of Europe. The French have a lower limit and have more abortions (and they have a long Catholic tradition too): see Unity's scrutiny of the actual abortion figures and laws, here and abroad.

"The rusty coat hanger back street abortionist scenario is often advanced as the only alternative if abortion was illegal. This was not the case in the Irish Republic. There will always be places where it is legal."

Those in Eire wanting an abortion either go illegally or they cross over into NI or Britain to have their abortions (a fact that skews our own abortion figures, since the traditional abortions per live births takes no account of the traffic from Eire).

"When it becomes routine such as this it does rather prove my point that it is for convenience and not for real medical reasons."

An abortion is never routine: it is a deeply humiliating and invasive procedure (unless you catch it very, very early).

"My opinion is that the numbers should be scaled back and terminations should only be performed for bona fide medical reasons."

Thank goodness you aren't running the country then.

"I am concerned that the UK is being represented as the 'abortion capital' of the EU."

It is being represented as such (especially by big, fat liars like Dorries) but as Unity's article points out, the facts simply don't bear this out.

Sorry for the delay in replying to you.

Now now, you didn't swear enough at me. There are genuine medical reasons for some abortions. Many others do not fall within these criteria. But you imply terminations should be allowed for non medical reasons which I think is outside of what the law allows for.

With numbers of women having 4 or more abortions then for them and others with even more, it is becoming 'routine' in the sense of a regular occurrence over time.

The figures on abortion numbers support your contention so OK.

If I was running the country, there would be at least 640 dangling from lamposts, plus a few others now retired.