Oh, look! As predicted, the money's running out and so our fuckwitted Cyclopean Prime Minister and his equally lackwitted Chancellor—or, as I like to call 'em, Bodger and Badger—are going to solve the problem by putting us all further into hock.

The blow to tax revenues from the credit crunch is set to send the Chancellor plunging £16 billion or more deeper into the red over the next two years than he has planned, calculations for The Times indicate today.

The estimates of the toll on tax receipts by the National Institute of Economic and Social Research will aggravate the acute financial headache already facing Alistair Darling.

With a general election expected as soon as next year, the Chancellor is already boxed in. A still deeper slide into the red would leave him with little scope for pre-election giveaways or for extra tax and spending measures to help to stave off a recession.

The institute calculates that the severe economic and financial impact of the credit crunch will mean that the Chancellor has to borrow an extra £8 billion in the present financial year, 2008-09, and another £8 billion extra in 2009-10. The £16 billion total is the equivalent of adding nearly 4p to the basic rate of income tax.

Oh, fucking well done: thank you so fucking much. I mean, it's only money, isn't it? I mean, what's another £16 billion, eh?

The answer is, of course, that it's peanuts compared to the massive amounts of cash that NuLabour have splurged so far. This topic is covered regularly and extensively by Burning Our Money...

We start with the official National Debt—Brown's figure, as published by the Office for National Statistics and charted above. When last sighted [PDF] (figures up to Dec 2007), that was £536.5 billion, or 37.7% of GDP. So still within Brown's 40% rule.

We first need to add PFI debt. According to HM Treasury, its discounted present value is now £91bn, but since that ignores this year's new commitments and all payments beyond 2031-32, we'll round it up to £100 bn (see this blog), of which a mere £5bn has been counted in by the ONS.

Next, we need to add the liability for those unfunded public sector pensions (eg see this blog). According to the latest estimate from the IEA, that's another £1,025 bn.

Then we have the cost of decommissioning our old nuclear power stations. That's an explicit taxpayer liability we reckon comes in at around £70bn (see this blog).

And don't forget Northern Rock's £100bn debt, now formally added to the public sector balance sheet by the ONS, even though they haven't yet crunched the precise numbers (see this blog).

Add in Network Rail's debt at around £21bn, all fully guaranteed by taxpayers but excluded from the government's balance sheet.

Or £74 grand of public sector debt hanging round the neck of every single household in Britain.

After 15 years of a growing economy, the budget really ought to be in surplus, so as to provide room for an expansion of the deficit when the inevitable return of the business cycle happens.

He’s spent it all though and looking at the difficulty he’s having in restraining public sector wage rises, he ain’t going to be able to get out of this easily.

And that's the point, of course. The economy's slowing down, yet inflation is, in reality, pretty high. So the unions are getting uppity and agitating for higher wage rises for their members. But there's no money.

And Wat Tyler is examining what those desired pay hikes might mean for us.

As taxpayers we can only sit and grind our teeth. Once again, a Labour government has blown a shedload of money on hiking public sector pay. And once again, it's ended with most of the public sector deeply demotivated and ready to strike.

With a weak government which still has over two years to run, it's clearly going to get worse. Strikes, certainly. Cave-ins, highly likely.

One cave-in we should particularly look out for is the RPI-linked deal. Already this morning we've heard the GMB calling for RPI plus o.5%, which at present would mean nearly 5%. On a public sector paybill in excess of £150bn pa.

BOM's more mature readers will recall RPI-plus was precisely the formula that hopeless Heath visited on Britain in 1973- just before the first OPEC oil price hike. And it really did turn a drama into a wage-price spiralling crisis.

Tyler well remembers starting work as a civil servant in 1973 and seeing his pay increase by leaps and bounds every single month as the RPI soared and the Heath formula kicked in.

As Tyler points out, DCI Sam Tyler is not the only one who is going back to the 70s: we are all making the trip back to the Winter of Discontent. May I suggest that you get any dead relatives buried as swiftly as possible? Because there are going to be plenty more strikes... 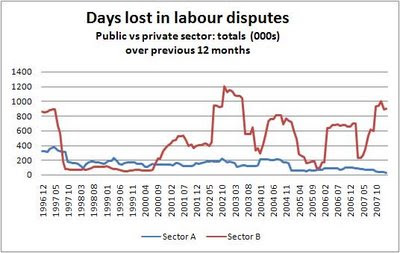 Here's fun. The chart shows the number of working days lost to industrial disputes in two sectors of the economy. Let's call them Sector A and Sector B.

Yup, you guessed it—the sector with all the strikes is the public sector, which is currently losing nigh on one million days every year to industrial action, compared to a mere 34,000 in the whole of the private sector. Taking account of the difference in numbers employed, the average public sector worker goes on strike well over 100 times more frequently than his private sector counterpart.
...

It's time for the final act of every Labour government of Tyler's lifetime—incomes policy and many, many more strikes.

At least Tyler has already laid in stocks of flared trousers. It's only a matter of days before some government minister comes on TV telling the rest of you there are plenty to go round and you shouldn't panic buy.

Quite. Thank you so much, NuLabour; thank a fucking bunch, Gordon, you monocular wanker.

Now, I know that I rail about the Tories being a bunch of soft-Left wankers who are about as trustworthy as a... well, as a bunch of bastard politicos but, seriously, I am not sure that even they can be quite as disastrous as NuLabour.

All we need now is for Bodger and Badger to wander back from some foreign trip and say, "crisis? What crisis?" and we'll know that we're really fucked.
By Devil's Kitchen at May 01, 2008

As the saying goes:
Empty heads vote Labour governments in.
Empty wallets vote them out.

The problem is there's no Maggie Thatcher in the offing

The £100bn added by NR is offset by the value of NR's assets. Even should there be massive defaults by NR borrowers, it's not likely that the total NR mortgage book becomes worth 0p in the £. Hence putting a figure of £100bn in to the "ooo, scary scary" rhetoric isn't very illustrative of anything at all.

Now all that regular debt, for which the Government got precisely zero (and which Gordon calls "investment") is more of a worry, since it's added to the balance sheet 0p in the £ spent.

Don't forget our old friend the balance of trade:
http://europe.theoildrum.com/node/3907#more

Deja vu indeed. I had the exact same thought driving to work a few days ago. Having lived through the last Labour government it has an all too familiar feel. Plus ca change as the French say....

I don't believe how complete knobs like Ken Livingstone and Gordon Brown are "running on their records". How the fuck can that happen?

Brown, claiming to be the best Chancellor ever - Mr "Iron Fist", Mr Prudent - pumped billions into the public sector, wasted the money and gave us a serious problem with public sector inflation. Livingstone - running on his record as Mayor !!!!! - made a 5 billion accounting "error" with the Olympics on the basis that HE THOUGHT that the East End "deserved it". Where's the democracy? Will the money be spent efficiently? Giving tax payers money to Leftie cronies? Ooh what a surprise!

How do these fuckers have the nerve to run on their records of "success". I might as well just flush my salary straight down the toilet and cut out the middlemen.

I'm sure you can guess ... they don't have my vote - but then again they have plenty of other "clients" voting for them I suppose.

"the Chancellor has to borrow an extra £8 billion"

The key word is extra. Over the past four or five years, even by official sanitised gummint figures they have been borrowing £40 billion per annum.

Now we all now that things have, year in year out, turned out slightly worse than forecast (even though The Goblin King and Ed Bollockface have the uncanny knack of calling BoE interest rate changes correctly every time) so that £48 billion will turn into ... well I'm not sure what, but something quite nasty.

But, as I have said before Socialism works!!. It works supremely well!! Its aim is to smash the economy to pieces and leave everybody worse off. In that respect it has always been highly successful.

I'm running another fun on-line poll over at mine BTW.

Gordon's got it all taped.

It all works if you have one eye, no brain and rough it out on the back of a fag packet. All you have to do is believe, burleev, bulimia.

That's right: Gorge (Gord?) yourself until you are sick and then spend, spend, spend again. You'll feel awful for a short while but no one of any consequence pays, and, as everyone in Br*tain knows, the English are of no consequence at all.

Until there's a general election.

I'm afraid I might have to borrow that one

Some nice -and refreshingly honest-detail on British national debt. Its not often you see it.

What makes it worse is that these debts have been incurred and spent heavily disprportionately in favour of our celtic fellow Britishers. England gets ---- all.

All Labour governments eventually run out of our money.

Half the bastard country now works for them for their daily bread.

So who is Mousey?

If you take England as a whole, anon, yes. But Scotland actually receives less per capita than most counties in the North. Not much less, but still less. The debt has been incurred and spent disproportionately outside of the Home Counties, not just on Celts. (Which most of us lowland Scots aren't, incidentally, but that's just a pet whinge of mine...)

Whats all this anti scottish bullshit you ignorant cunts? Youre obviously all thick as shite if you are believing all this crap that the scottish are "stealing" your money!! But then again, my father always said you english were thick as shit. He was right.

Oi, DK, you nicked "Bodger and Badger" from me, you basket.

McCunts! Typical that they'd use other people's money and then when they'd spent that, they borrow it and hide the bills, then the people who didn't know they'd been plunged into such huge debts are saddled with paying back the said debts.
Typical Scots - spend, spend, spend and then fuck off and leave the English to settle to the accounts.