The Devil rides out

Your humble Devil has been showing his face at various events recently. In April, I spoke at the Libertarian Alliance's Gold Subscribers Dinner in the private room at Shepherd's Restaurant which, despite its unremarkable exterior, is actually rather good (and co-owned by Michael Caine, I believe).

"And for my next number, a song originally performed by Westlife..."

Next up was a totally different experience: taking the libertarian view point (and being the "opposer") at a Synergy Project debate on the 1968 riots. This was somewhat unusual, not only because the others onstage had actually taken part in said riots, but also because it was held in a massive club—SEOne in London Bridge—full of slightly weird events. There were bands, people making clay sculptures, a nightclub and a lot of hippy types. The debate didn't start until midnight and your humble Devil must confess that he found the whole thing slightly surreal...

"All your minds are belong to us." Your humble Devil performs an impromptu introduction, extolling the joys of libertarianism to Oxford students.

Finally, the LPUK leadership were in Oxford on Thursday, having been invited to speak at the Trinity College politics society. Your humble Devil had taken the whole day off work (what a treat) and spent much of the day, with the lass, sampling the pubs of Oxford. I had, in fact, forgotten that my favourite brewery, Wychwood, was in Oxfordshire and I spent quite a bit of the time being excited at the beautiful Wychwood ales, including Hobgoblin (possibly my favourite ale), that were on tap in nearly every pub. Hoorah!

As the hour of the debate drew near, Andrew, Tim and myself congregated at the gates of Trinity and made our way to the room in which thirty or so (I guess) students were gathered. Patrick was, alas, slightly delayed and we three had to make an impromptu presentation for a few minutes. Inevitably, your big-mouthed Devil decided to stand, the better to gesticulate wildly, and then our glorious leader arrived and we got properly underway. 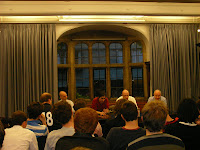 Having a bad hair day is not compulsory in LPUK, but it helps...

Notwithstanding my earlier scorn, and ill-prepared though we were, the attendees all listened attentively (or at least politely) and the questions that they asked were sensible and intelligent. Further, there were more than a couple of googlies that were simply were not well prepared enough for; thanks for those, chaps: you have helped us to identify a few areas of policy that we need to think about a little more than we have previously. We finished up at about ten and then few of the students accompanied us to the pub afterwards, where we continued the discussions.

All in all, it was an interesting, informative debate: we learnt a lot! No, seriously. Due to the way in which the party has grown up and developed, i.e. on the web, it is rare for the leadership to all be in the same room: this was only the third time, I think, that this has happened and the first time that it has taken place in a formal environment. Personally, I got a lot out of it; although I may have railroaded the discussion somewhat, I did so in the knowledge that I had people who could take up the slack or fill in the details. I found it an immensely heartening and reassuring experience.

Thanks to Trinity for having us, and thanks to all those who attended...

The Libertarian Party's next appearance will be at a "Day of Freedom" on 23rd June at Farnborough Sixth Form College.

It will be a series of talks on the values of a Libertarian society, and I would be elated if a member of the UKLP could attend, and perhaps give a speech or field a few questions.

The gentleman who invited us runs the formal debating society and brightened my day with this part of his email...

Our motion last week was 'this House would vote UKLP' and me and my partners succeeded in securing a unanimous verdict in favour from the twenty five people in attendance.

If only it were so easy in real life!

Anyway, we—by which I mean myself, Andrew and Simon—shall be there from about half ten in the morning, taking part in various activities and debates for a few hours, I believe. As usual, I am looking forward to it...

My (now deceased) maternal grandparents lived in Farnborough and I haven't been back there in many years; I may have to visit some of my old stomping grounds...
By Devil's Kitchen at May 26, 2008

While over in the USA, Bob Barr secures the Libertarian Party's nomination for the Presidency.
http://www.thecarpetbaggerreport.com/archives/15660.html

I always thought Wheatley should have written a sequel to 'The devil rides out'.

He could have called it 'The devil rides back in. It was raining.'

Sounds good - sorry I missed it.

Devil - I can't help noticing that the audience (the snappily named Trinity College politics society) reflects the platform, all white, all male, and I would guess mostly middle class.

Do women and non-caucasians have to sit at the back, or have they simply lost interest in political ideas ?

The 'gentler' sex were in the audience, yup- mostly 'middle class' though I am the grammar school educated son of a working class car sprayer and DK is an Etonian- there were also members of ethnic minorities there. Does that make it a legitimate meeting now ?

Though its not the sort of place where anyone would use the phrase alma mater however.