Rachel Johnson doesn't get it 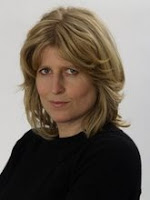 Rachel Johnson: absolutely no loss to the 'sphere at all.

Apologies for the lack of writing: I have been spending a lovely weekend, with someone human, away from my computer, and mentally preparing myself for my new job. However, since the whole thing is unutterably amusing, I thought that I'd comment on something entertaining.

Now, you may remember Rachel Johnson, who writes too many columns about nothing of any interest for too many publications. Some time ago, I fisked one of her abysmal pieces of writing and she was piqued enough to email me. So, she noticed my hatchet job and yet seems not to have got to grips with the most basic concepts of blogging.

I don’t get blogging.

MSM columnist bore doesn't get blogging. What a surprise.

It’s not only that I’m reluctant to write for nothing.

Some of us—the majority of us—do it for fun, Rachel. We enjoy blogging. Many of us also read blogs because we are fed to the back teeth with all these tedious columnists bitching and moaning about stuff that happened in their lives last week.

Even if you are writing about news that happened last week, you can be pretty sure that the bloggers covered it extensively before you even sat down to start composing your column.

You've got jokes? They've been done. You've got an insightful comment (doubtful in Rachel's case)? It's been done, with aplomb, by people with more experience in that field that you will ever have. You get the picture...

You might find, Rachel, that blogging actually hones your writing skills; writing columns certainly isn't making it any better.

There are all those people who ask, “Do you blog?” at parties (our own sad neutered version of the “Do you swing?” question), and who warble about “wikis” and “web presence”.

Fucking hell. How tedious are your parties? "Do you swing"? Fucking hellski.

Still, a few weeks ago I started to write one.

Oh, wow. Really? I bet it was scintillating.

It’s very easy - even a middle-aged woman can do it.

Memo to blog software writers: Rachel Johnson can operate your technology—you need to make it harder.

I wrote about what I was making for supper that night. And food shopping in the Portobello market. Then I checked to see the global response to my debut. Nothing. On my next five posts? Zero comments.

That's because what you were writing about was fucking tedious.

Anyway, last Sunday I went to watch the Olympic torch relay up the road. I witnessed the men in blue and the Met surging up and down Ladbroke Grove and skinny little athletes in their white logoed tracksuits trembling in the snow. I watched Konnie Huq run gamely past, holding the torch, and I watched that angry gingery man try to grab the torch and I watched men in uniform try to stomp on his head.

Then I really pulled out the stops. I wrote about how my husband shouted, “Free Konnie Huq!”, and I gave an eyewitness account of how a former Blue Peter presenter, that is, a celebrity, was actually touched by a civilian. And after all that unpaid work, was the web on fire? Once again – nul comments.

I suspect that there may be another problem here too. Y'see, Rachel, unless you tell people about your blog, no one is going to know that it's there. And I can't help feeling that, in order to prop up your thesis, you deliberately haven't told anyone about it.

Rachel's blog, you see, has no links to anyone else; it doesn't even have a blogroll. And, due to the amazing technology that we bloggers use, Rachel, that's how we know that other blogs exist. We can see when people have linked to us and then we go and investigate.

But, even doing that, it takes a while to build up some momentum. It took me three months to get my first link in, and it's taken a good few years to build up my current readership. Your humble Devil puts in some effort, you see.

Now, Rachel expected to get thousands of hits (although there's no counter code on her blog) and hundreds of comments simply because it was The Times columnist Rachel Johnson's blog! Feel the thrill!

No doubt Rachel assumed that, in amongst all of the hundreds of thousands of blogs that do actually link to people, hers would get to the very top of the queue; that, in fact, because it had "Rachel Johnson" on it, her blog would shine like some beacon into the dark night of the blogging world, and everyone would flock to see what words of wisdom the Great Times Columnist Rachel Johnson had to impart.

And what a poor thing it is, this "blog". How mediocre and prosaic and insignificant. And badly-written. If anyone found Johnson's blog, I would imagine that they dismissed it out of hand&mdashpossibly as a cack-handed parody.

I don’t get it. There are the blogs that work – such as Judith O’Reilly’s brilliant blog turned book Wife in the North, or the riveting Petite Anglaise, or our own Alpha Mummy (on Times Online; a treat) – where you sense that the authors are releasing themselves with feeling into the ether.

Yeah, I think that we know what kind of stuff you like to read, Rachel. I'm not surprised. When Rachel goes on holiday, I imagine that she has one suitcase full to the brim of nothing except ChickLit. Fucking hellski...

This is because blogging is about regularity, I presume. You have to post every day. You have to be totally committed.

Well, you need to write reasonably regularly, yes; otherwise people will assume that you have just given up and they won't visit again. And yes, you do need to be committed: since most of us are not, as you point out, paid to do this, one needs to have a desire to do it for free (as is the case with most hobbies).

There's another thing; you see, if someone buys The Times and always skips Rachel's column because it a tedious load of old tosh, Rachel doesn't care. Rachel will still get paid; she only has to please her editor and, provided that thousands of abusive communiqués don't flood in, she will retain her job and she will be paid.

However, we bloggers have to speak to our audience, i.e. the readers. If we don't write well, or make interesting points, then people won't read us. And we will know that people don't read us. Many bloggers will then continue to write anyway, but if you want people to pay attention, you have to be good (hem-hem).

In California people have started to blog themselves to death and The New York Times is reporting stress, sleep disturbance and exhaustion among the “blogging community”.

More fool them. Still, who would have thunk it: Americans taking things to the extreme...?

Well, there is no danger of me having a coronary at my laptop triggered by exhaustion and anxiety about page hit rates.

It’s quick and easy to start a blog, as I’ve discovered. It’s even quicker and easier to stop.

Thank fuck for that, frankly. There's enough garbage swilling about in the blogosphere without you adding your swelling mountain of tedious tripe. And, having given you far more exposure than you deserve for your inane witterings, I shall leave it there.

Should anyone want more on this, do drop into Timmy's place, or The Longrider's blog. If you feel like showing Rachel the love, however, why not take The Englishman's advice and leave a comment at Rachel's blog?

P.S. Given the above, do expect Rachel's next column to be some self-serving diatribe about how everyone's so nasty on the 'net and it's probably because of the anonymity and nothing to do with how Rachel writes absolute horseshit...
By Devil's Kitchen at April 14, 2008

i feel a candidate for a trebuchet shot coming on...

I am only excusing your usual sexist nonsense because she is a Tory Toff and so fair game.

Her blog is truly terrible.

Even my blog's better than that, and I'm Harriet Harman!

Jesus, I read her blog post and genuinely thought she was taking the piss. Still wasn't funny, so I ignored it.

"I wrote about what I was making for supper that night. And food shopping in the Portobello market. Then I checked to see the global response to my debut. Nothing. On my next five posts? Zero comments."

If that was serious, she must be ill.

I've read the Times since, since... it used to be a decent newspaper and I have never heard of this dear lady. That can only mean that her columns are so unutterably dull that, like reports on football matches, my brain no longer registers them.

I shall look out for her.

That would be professional writer Judith O'Reilly's 'blog turtned book', I take it...?

She seems to be getting plenty of comments now...

I still can't get over the fact she types the date in her 'Post Title' field. Does she not realise that the date and time attach to each post automatically?

She isn`t alone , there are a large number of really dull writers in the MSM and women do seem to be especially at fault.
I think it starts at school , she dutifully covered her English essay bok with wall-paper while boys obviously could not be arsed with "What I did on holiday"

Oh come on people: you've all missed the most staringly obvious gag of the lot.

Look at the actual name of her site. It is not "Rachel Johnson". It is "Rachel's Johnson"

Given blogspot is hosted in the US, I've no idea how that got through Google's spam filters...

is a something of an overstatement; Chris Dillow seems to care and you can surely see his point...

Konnie Huq is a damn nasty piece of work.

Think of her as a socicalist ninja celebrity.

I still think that she had two options, do the official gig and get paid and on TV, or do the protest stuff and hope for a good spread in the paper the next day.

She went with the clever, do the official gig, but make sure my beardy hippy mate catches up and we'll all get in the news and the papers - result all around!

Anyway - hopefully, her career will crash even further - not that being a Blue Peter presenter is any more of a career crest than being Tom cruse's acting teacher.

She's stopped writing. No posts after 6th April. Must have got bored, or else too much stuff to cook for David Cameron and wives every evening.

Shouldn't it be "Konnie Fuq"?

When is the woman going to get her clothes off? The Daily Sport will have fun with her name for sure.